In my post about last month's Princeton conference on the Popular Romance Author, I wrote of Professor Kay Mussell's challenge to scholars of the romance genre to question the popular assumption that all romance novels are the same, and that all romance = bad literature. Scholars certainly have a role to play in shifting common knowledge. But the burden doesn't need to rest only upon academia. Everyday readers of romance can play a role in such a project, too.

Do you know someone who likes to read other sorts of genre fiction, but who believes that romance is beneath him/her? That romance is badly written, or cloyingly sentimental, or oppressive to women? I challenge you to challenge that person—a colleague, a neighbor, a friend—to sit down and read a romance you recommend, then talk with you about the experience.

I recently found myself inadvertently in the midst of such a challenge. During the school year, several families in my neighborhood get together for dinner once a week. We began the tradition when our kids were toddlers, when we noticed that unlike the summer, when the kids were all out on the sidewalks and the street enjoying each others' company, they barely saw one another during the colder months. Initially, our weekly dinners served not only to give the neighborhood kids the chance to play together as a group once a week, but also gave harried parents a much-appreciated respite from cooking three out of four Wednesdays each month (host family cooks for all). Most important to us grown-ups, with only one or two parents needed to supervise the the toddling hordes, our weekly dinners gave us new parents a chance to engage in all-too-rare adult conversations, conversations about politics, sex, salacious gossip, and myriad other topics that we'd almost forgotten in the constant chatter about Big Bird, baby wipes, or whether a frozen bagel or an plastic ice teether worked best to soothe sore infant gums. 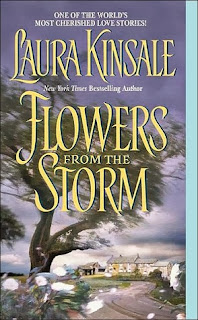 Over the years, we've come to share news about our work lives, too, and support each other through the ups and downs of our careers. My neighbors encouraged me during the difficult years of writing a dissertation with a small child vying for my attention, and, more recently, have heard about the ups and downs of my attempts to parlay my academic writing skills into the fiction-writing realm. Several months ago, somewhat to my surprise, one of my neighbors, an MIT grad working as a computer programmer, asked to read my current work in progress. After reading the chapters I sent him, he told me his reactions, but admitted that his unfamiliarity with romance fiction made it difficult for him to judge what I'd written. He asked if I could recommend an exemplar of the genre, so he could have a point of reference, and so critique my work more constructively.

I ran upstairs to my office, and plucked two historical romances off my shelf, one a classic, one a more recent favorite: Laura Kinsale's 1992 Flowers from the Storm and Cecilia Grant's 2013 A Woman Entangled. Though he seemed a bit embarrassed by the cover of Grant's novel, he thanked me politely and took both home.

I wasn't sure whether he would actually read either one of the books, but one long business trip plane flight found him turning the pages of the Kinsale. And after he returned home, he kept reading. Last week, while still in the midst of the book, he told me how much he was enjoying the experience. He'd been particularly surprised by the depth of research that had gone into writing it. "Are you sure this wasn't really written by a man, pretending to be a woman?" he asked. If another one of my neighbors had said this, I would have known he was joking, just trying to yank my chain, but this man is of a more serious cast. "Did you really just say something that sexist?" I asked, much to our fellow neighbors' amusement, and perhaps a bit to his chagrin. "Well, I just didn't think a romance writer would be interested in finance, and the state of medicine at the time, or any of the other historical details in the book," he said, before the general conversation moved to another topic.

The next week, dinner was at his house, and we had the chance to talk more about reaction to the book before some of our other neighbors arrived, and later, during the dinner. He'd finished it by then, and told me again how much he'd enjoyed it. In fact, he started asking me questions and talking about details of plot that I, not having read the book in several years, did not even remember. His wife told me she'd never seen him so engaged by a work of fiction, or read a book so quickly. Though he felt the story veered more towards Maddy's point of view, he thought both Maddy and Jervaulx well-developed and compelling; the plot held his interest; and the historical details gave him a strong sense of place. He was a bit more cagey when I asked him about the romance aspects of the novel—a bit shy to discuss sex in mixed company? Or just not that interested in that aspect of the book? 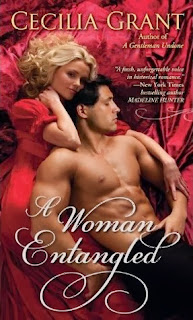 At the end of dinner, I asked for my book back, and he handed me both the Kinsale and the Grant. When I asked if he wanted to hold on to A Woman Entangled, he shrugged, saying "Better not take the chance of ruining the experience by trying another." Was he, despite having read Flowers from the Storm, unpersuaded that romance in general might be better than he had assumed? Or was it that he no longer felt the need to read another romance? Or was it, as his wife suggested, the appearance of the half-clothed man on the cover of the Grant that gave him pause? ["I did enjoy the book but I probably won't make time to become a fan of romances or any other genre really. I read only a few books a year, a mix of fiction and nonfiction, and I don't expect that habit will change in the near future," he wrote to me later when I asked].

In return for giving me his reactions, he asked me for mine. In particular, he was curious about whether I considered Kinsale's book feminist. My gut reaction is both yes and no, but I'm going to have to go back and reread Flowers from the Storm more carefully with his question in mind.

I asked my neighbor if he would take a look at this post before I published it, to make sure I was accurately representing his views. After reading it, he sent me these two additional comments:

In hindsight, it's clear from my reactions that I was giving the genre less credit than it deserves, or at least than Laura Kinsale deserves.


So, while the experience hasn't made a life-long romance reader out of my neighbor, I do believe it made him think a bit more about the assumptions he'd taken for granted about the genre I like to read, and the book I'm trying to write. The whole experience made me wonder: what would happen if romance readers each challenged one romance doubter to actually sit down and read an exemplar of the genre? Would the common knowledge about the genre of romance change?

Can you imagine extending such an invitation to a romance doubter you know? If you take up the challenge, I'd love to hear what book you choose, and how your romance doubter reacts...
Posted by Jackie C. Horne at 9:00 AM