Guess Who's Dissing Romance Novel Covers? It's Not Who You Might Think...

Though the genre of romance is often held up for ridicule, comics and cultural critics alike seem to take particular pleasure in targeting the covers of romance novels. It's an easy way to make fun of the genre without actually having to read it; all you need are a few funny one-liners, a heavy dose of snark, and a finger to point at images that you assume anyone with even a daub of intelligence would find as laughable as you do. Even many romance readers complain that the covers of the books they read often don't reflect the words inside them; "garish," "cheesy," and "embarrassing" are only some of the kinder adjectives I've heard fellow romance lovers use to explain why they never read their romance novels in public.

Many a romance novel cover is worth a laugh, or even a cringe. But are they truly in need of "vandalizing"?

Yes, apparently someone at the Toronto Public Library thought inviting hip teen readers to attend an Anti-Valentine's Day party, where the activities would include not only "test[ing] your knowledge of former celebrity couples" and "writ[ing] the worst break-up letter," but also "vandaliz[ing] romance novel covers," would be a big draw.*

A library inviting readers to vandalize books? What alternate universe are we in, here? Intent on raising its coolness factor, the TPL completely ignored the sexism behind the assumption that romance novels deserve to be vandalized.

After Toronto-based Harlequin author Vicki Essex penned an open letter of protest to the TPL, the library modified its plan. Now, party attendees can be productive rather than destructive, designing their own "bad" romance novel covers rather than defacing the covers of others'. Ironic, isn't it, that Toronto is the home base of Harlequin Enterprises? 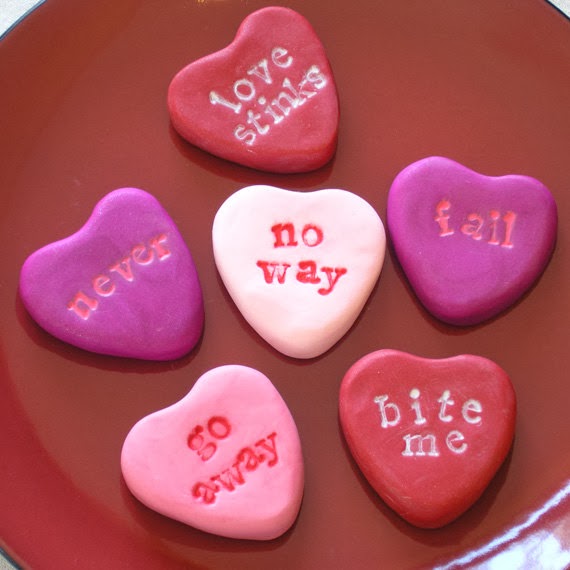 I can understand the impetus behind the library's Anti-Valentines' Day event. Many a young teen in my neighborhood went through a Twilight romance craze only to abandon it a year (or less) later, mocking with biting scorn what had once been beloved. The Anti-Valentine's Day party attempts to tie into the energy behind that rejection, to validate a teen's sense of maturity at having outgrown certain books and the fantasies they contain. There's even a feminist aspect to the anti-Valentines' Day party idea, in as far as it contests the social insistence that (especially for girls) finding true love is the most important thing that will ever happen in your life.

Yet urging teens to deface actual books (or even photocopies thereof) does not sound like it is quite in keeping with the spirit, if not the letter, of the American Library Association's Library Bill of Rights.

If there was one person I thought I could count on not to diss the romance genre, it would be a librarian. So disappointing to discover that librarians, too, can have sexist feet of clay...

*As reported Wednesday on the Jezebel blog, here