The Good, the Bad, and the Ideological

Earlier in my professional career, I spent a year working as a freelance children's book reviewer for several national book review journals. Writing reviews of 60 or fewer words (which I did for The Horn Book Guide), or longer 150-250-word reviews (for Publishers Weekly) barely gave me enough space to limn a book's plot and write a sentence or two about its literary merit. Analyzing, or even mentioning, the ideology/ies underlying a particular novel or work of nonfiction was completely beyond the scope of such traditional-length reviews. Not that many review journals would have appreciated a reviewer who spent time pointing out a book's gender, racial, sexual, or any other politics. Most journals like to pretend that what constitutes good literature is completely separate from issues of "isms," and that bringing up political concerns will only muddy the literary critical waters. One of the reasons I started writing this blog was to have the chance to review books while discussing not only their literary merits, but also the implicit and explicit expectations about the world, about life, and in particular, about masculinity, femininity, and love that each book contains.

But because I was trained both as an editor and as an academic scholar, I always bring along my own expectations about what good writing is, and what it isn't, to any book I read. Correct grammar, round rather than flat characters, showing rather than telling—these and many other rules I've learned and internalized over the course of almost 50 years of reading shape my reaction to every text I encounter.

I've read many a book that I consider well-written, even beautifully written, but which espouses ideologies I cannot stand. But what happens in the opposite situation? When I read a book which I would consider feminist, but which I find poorly written? How important is it to me as a reviewer to uphold certain standards of writing? How important is it to you as a reader of my reviews? How sure are we that those standards of writing themselves do not contain implicit assumptions, assumptions that may directly or indirectly lead me to exclude certain books from consideration? Can the line between good and bad writing be so easily drawn? 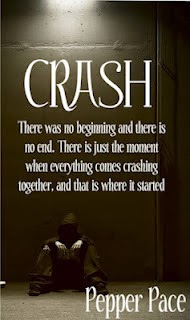 This issue proved particularly pressing for me this week as I read Pepper Pace's interracial romance Crash. On her Facebook page, Pace self-identifies as black, and notes that she is yet to be published. But she has self-published quite a few interracial (IR) romances, and was recommended to me by a commenter in response to a blog post earlier this year about wanting to read and feature more works by African-American writers.

As its heroine, Crash features a woman not unlike Pepper Pace herself, a forty-two-year-old woman of African descent who writes IR romances. Spotting a young runaway out her back window one night, at first Sophie chooses not to get involved. But when she sees that the person is still there hours later, Sophie's memory of her own mother vowing to protect her draws her outside. Sitting on the curb is a young white teen, homeless, the victim of a beating. Sophie invites the boy, Lucas, inside, then takes him to the hospital when she realizes he's not only been beaten, but robbed and raped.

Sophie believes that Social Services will take care of Lucas, but when it turns out that the boy is not a boy at all, but a man of twenty-two, Sophie ends up bringing him back home, offering him a place to sleep in her basement, and a temporary job working as her assistant. Thus begins one of the most unconventional romances you'll ever find, a romance that crosses not only differences of race, but also of age. Pace's novel is vitally interested in how to draw the line between loving and taking advantage, issues of power that come up in both racial and age-related situations such as the one in which Lucas and Sophie find themselves. I found her story unusual and intriguing, and deeply appreciated reading about characters whose stories and voices are so rarely heard in mainstream fiction.

But Pace's story breaks so many of the rules of good writing that I take for granted that, despite my interest in her characters and her story, there were many times when I wondered if it was worth it to keep going. Hopping from Lucas's POV to Sophie's and back again within the same scene, without any warning, made it difficult to keep track of who was thinking and feeling what. Several consistent word misspellings ("Ma'ame" instead of "ma'am," for example) kept tripping me up, pulling me out of the story, as did the constant misuse of semicolons. Long paragraphs that summarized actions instead of showing through scenes kept putting me at a distance, instead of drawing me in to the narrative, the position I most enjoy being in when I read, especially when I read a romance. If I had to give the book a rating based only on the writing, I'd probably give it a 2 out of 5. And that would be generous.

On Goodreads, though, Pace's books consistently earn ratings of 4 stars and higher, so it's clear that not everyone shares my beliefs about what constitutes good writing. Or, perhaps, believes that writing matters to quite the same degree that storytelling and characters do (interestingly, though, on Pace's blog Writing Feedback, she announced that she had been re-editing several of her previously published books, with the help of outside editors, suggesting that she herself is aware that there is room for improvement on the level of her prose).

Does it matter to you? How willing would you be to read a romance that you felt was not well written, but which presented a character, or a storyline, from an underrepresented group? Would you be interested in reading reviews of such books? Why or why not?