During my late teens and early twenties, I worked in a variety of different part-time jobs to earn spending money and to help pay my college tuition. Most were pretty typical of the jobs available to American teens in the 1970s and 80s: working the counter and the Drive-Thru window at McDonalds; manning the register at a local craft shop; keying in typewriter-created manuscripts into a computer for a typesetting company. But the job I had during the summer between my sophomore and junior years of college is the one I remember the most vividly, perhaps because it was so different, so distant, from any career I could imagine undertaking. Working the line in a facility that manufactured tampons (in the 1980s, right before most such production migrated from the United States to foreign shores), I spent my days interacting with a few men and a whole lot of women for whom factory work was not just a part-time gig, but a day-in, day-out drudge.

Factory work, including the manufacture of tampons, is typically repetitive, regimented, and mind-numbingly dull. Most of the people who manned the production lines at the factory where I worked were women; most of the people in charge of repairing the machinery, or supervising its operation, were men. The line-workers were rarely asked their thoughts about how the plant was being run, or listened to if they made suggestions for improvements. I liked the working-class women with whom I worked, enjoyed their good humor and respected their resilience, but felt so different from them, and not just because of the differences in our ages. "Make sure you marry a rich guy," the two fifty-something women who worked the same line I did would often advise me over lunches in the cheerless cafeteria. "Don't end up stuck in a job like this." That the best way they could imagine to escape from a dead-end job, even for a young woman like myself, on the verge of earning an Ivy League degree, was to "marry up," to pin my hopes on the ambition and earning power of a member of the opposite sex, made me incredibly sad. 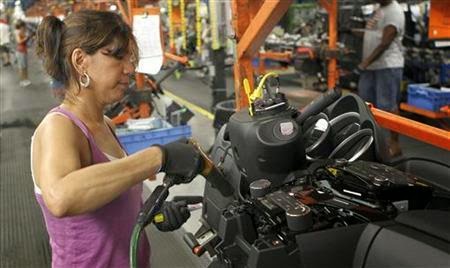 The narrator of Ann McMan and Salem West's Lambda-nominated lesbian romance, Hoosier Daddy, works in a Mid-Western factory, not a New England one, and in a facility that makes manly monster pick-up trucks, not feminine products that many men have trouble even naming without blushing. And unlike me, Jill Fryman, better known to her friends and co-workers as Friday, grew up as part of the working class. But Friday, unlike most of her colleagues in the Krylon auto plant, earned a college degree, catching sight of opportunities beyond the world in which she was raised. But Friday feels like a failure, both on the job front—she's right back here in the factory, working a job for which she's completely overqualified—and on the relationship front—the girlfriend choices are few and far between in conservative Indiana, and the few relationships she's had have all ended up in heartbreak, including her most recent one, with a woman whom she didn't even like that much, a woman who used her to get back at her husband for his infidelity. Friday would far prefer to stay home, reading her books and licking her wounds rather than facing the humiliation caused by her very public and embarrassing break-up. 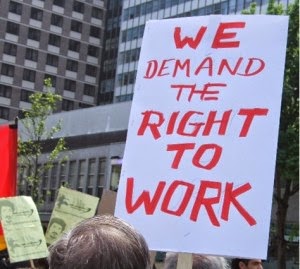 But Friday's friends are tired of her hiding; as Terri, the aptly nicknamed T-Bomb, tells her, "Girlfriend, nobody in three counties gives a twat about your business—including you. And if you don't start using it, it's gonna dry up and drop off" (15). And so Friday finds herself at the bar where all the Krylon workers hang out, Hoosier Daddy's, listening to an unfamiliar but incredibly sexy stranger crooning a Karaoke version of "Melancholy Baby." It's just Friday's luck that the woman, Eleanor Rzcpczinska, is a recruiter for the United Auto Workers Union, come to town to try to persuade the Krylon workers to initiate a union vote before the Japanese company that has just bought their plant has time to come in and endanger their jobs. In a "Right to Work" town such as Princeton (Indiana, not Pennsylvania), a UAW recruiter is tantamount to the devil. Getting involved with El (whom Friday's friends nickname "El Debarge") is a risk the determinedly risk-averse Friday knows far better than to take.

But El and Friday, unlike the heroines in Karin Kallmaker's Love by the Numbers (reviewed here) or in another Lambda nominee, Broken Tracks*, spend little time dancing the "is she straight or is she gay" dance. Each is immediately drawn to the other, and unlike the reticent Friday, El knows what she wants and isn't afraid to ask for it. El and "Friday Jill," the name Friday stumblingly gives El when the stranger asks for her name and which El continues to use, thus quickly find themselves in a series of embarrassing public encounters, hilariously involving not one, but three different bathrooms, encounters that begin to persuade Friday that it might just be worth it to get to know El a little better.

But Friday's relationship comes to the attention of the outgoing owner of the plant, Don Krylon, who offers her a raise and a promotion if she uses her "connections and influence with the rank-and-file members of our Krylon family to smooth over any rough spots that might mistakenly lead them to think hospitably about the UAW's false promises" (98). Krylon doesn't want anything to ruin the deal he's made with Ogata, the Japanese company that is about to buy his company, and tells anyone who will listen that if the union vote happens, Ogata will move the production of the lucrative Outlaw truck to another, non-union plant. Will Friday, who has remained determinedly uncommitted to either side during the labor strife, be forced to take a stand? 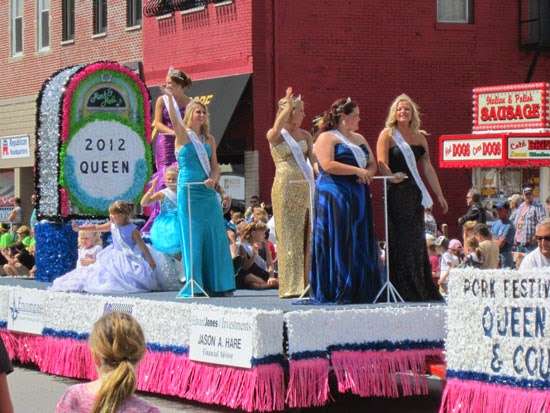 Friday, who feels committed to her friends and her town, but who has also experienced life beyond both, is a first-person narrator who can see the humorous aspects of the working-class culture in which she was raised, but who never invites the reader to look down on the people who inhabit it. For example, the book's sub-plot about the annual Miss Pork Queen competition, in which the daughter of one of Friday's friends is a major contender, is simultaneously laugh-out-loud hilarious and emotionally satisfying. I deeply admired both the truth and the affection with which West and McMan limn a culture not often depicted with any depth or realism in romance.

As long as you don't mind the sexy times taking place off-stage, Hoosier Daddy has everything a feminist might hope for in a satisfying romance: a great conflict; engaging lead characters and expertly-drawn secondary ones; a far-from black-and-white depiction of issues of social justice (despite the smarmy Don Krylon); and enough comedy to have you laughing on nearly every page.


*Another book nominated for the Lambda for best lesbian romance, but which focuses primarily on training and running the Iditarod, with only a tiny smattering of romance thrown in as an accent, and hence won't be reviewed by RNFF. 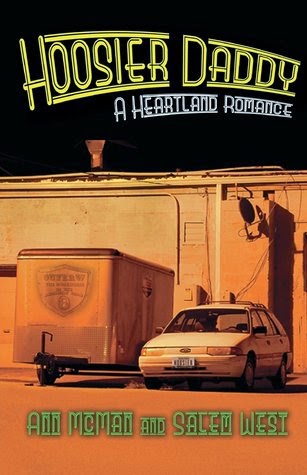