I'm among the lucky 3-8% of women who have won the PMS bonus sweepstakes: full-blown PMDD, or Premenstrual Dysphoric Disorder. Tiredness, irritability, inability to concentrate (what I like to call "stupid-head"), and cravings for salty chips and sweet carbs—oh, yeah, must be that time of the month. And as I've edged closer to perimenopause, my symptoms have only gotten worse. Trying to write during this five to ten-day period is like trying to swim through sludge.

PMS and PMDD aren't life-threatening, and are experienced only by women, so comparatively little medical research has been done in this area ("The causes of PMS are not clear, but several factors may be involved," the web site for the U.S. Department of Health and Human Service's Office of Women's Health helpfully notes). I've talked about my PMS problems with my primary care doctor, my psychiatrist, a specialist on women's mental health, a specialist in menopause; I've tried myriad remedies to alleviate symptoms Vitamin B? Vitamin D? Calcium with Vitamin D? SAM-E? DHEA? Birth control pills? Amphetamine Salts? I've tried them all, never mind my daily dose of antidepressant. Some alleviate some symptoms, while adding fun new side effects; some do little to nothing at all, at least that I can see.

When science lets you down, sometimes art is the only solace. I've been watching the clip from the film "No Strings Attached," the scene in which Adam (Ashton Kutcher) brings cupcakes and a mix CD to his friend-with-benefits Emma (Natalie Portman). Emma and two of her female roommates are all on the same cycle, suffering from PMS. I can't help but laugh when Portman and her friends start reading the song titles off the mix CD, made especially for a woman having her period: "Even Flow," "Red, Red Wine," "I've Got the World on a String." Here's the clip, for your viewing pleasure: 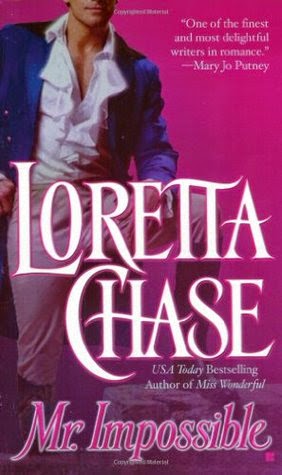 The only similar PMS scene that I can recall from romance novels is from Loretta Chase's effervescent historical Mr. Impossible. Its "great dumb ox" hero, Rupert Carsington, is in a panic when he hears that Daphne Pembroke, the whip-smart lady who is supplying the brains to his brawn on a Egyptian desert exploration, has fallen ill. Barging into her room, he insists that she tell him what is wrong, and how he can help. When she finally gives in and admits "All I need is time. It's my monthly courses," and tells him there's nothing he can do, he responds "For such a clever woman, you are woefully ignorant. There's a great deal one can do," even though he himself has no idea to do. And in he wades:

He didn't go away. He mixed the laudeanum with honey and water and watched her drink it. He wet the cloths and wrung them out and laid them on her forehead. He rubbed her back. He distracted her with humorous family anecdotes. He did not leave until she fell asleep. (233)

Ah, what I wouldn't give for an Adam or a Rupert right about now...


Given that menstruation, and the trials that often accompany it, is a monthly occurrence in the lives of most adult women, I wonder at the lack of mention of the subject in romance. Can you think of other romance novels in which the crimson tide is used to help develop the romantic relationship between the protagonists?
Posted by Jackie C. Horne at 10:54 AM