I was reading along in my e-book edition of Piper Hugeley's Christian historical romance, The Preacher's Promise, when I came cross a passage underlined with light grey dots—the sign the Kindle uses to indicate that an earlier reader of the book had used the Kindle's highlighting function to call out a passage she particularly wanted to remember.  The sentences in question—a prayer spoken by the novel's female protagonist, Amanda Stewart—were not ones that I would have highlighted. But a touch of a fingertip to my iPad instantly informed me that "5 other people highlighted this part of the book." Though I have no idea who those five other people might be, I did know that they all found the passage worth remembering. Were these five readers indicative of the general audience for Hugeley's book? Did they suggest that many, or most, of her readers approached her book looking for religious inspiration more than (or perhaps as much as) for the emotional pleasures of romance? Were they highlighting passages for their own edification, or because they wanted to point out the book's religious message to other readers?

After thinking about such questions, my mind began to consider the egotistical flip side of this highlighting business—what, if anything, would other readers make of the passages I chose to highlight? 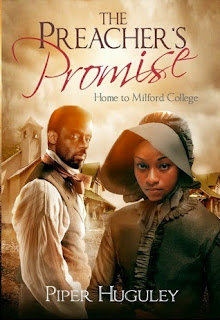 When I read a romance, I underline words or sentences containing information that might be relevant if I decide to write a review of the book (characters' ages, descriptions, relationships to others, backstories, etc.). But I also highlight passages that I consider feminist-friendly, or passages that hint at (or openly espouse) anti-feminist ideas or sentiments. Such passages might be more widely read than any review I would ever pen. Might coming across such highlighted passages in their books lead other readers to start thinking about issues of feminism and romance, too?

Turns out, probably not. As the amazon Kindle FAQ page, under the topic "Popular Highlights," informs us:

The Amazon Kindle and the Kindle Apps each provide a very simple mechanism for adding highlights. Every month, Kindle customers highlight millions of book passages that are meaningful to them.

Unless at least two other people have underlined the same passage that I have, it's not going to appear as a highlight in another Kindle e-book. So much for my delusions of grandeur, believing I might indirectly influence the popular romance-reading public towards a greater awareness of feminist issues...

Or does it? Turns out that the Kindle has another highlighting feature, one they've dubbed "Public Notes":

This feature allows Kindle customers to make their highlights and notes available for anyone to see. Now authors, thought leaders, passionate readers, professors and all Kindle users can opt-in to share their notes with other readers, helping friends, family members, and other Kindle users who choose to follow them to get more from their reading. If someone you follow has highlighted a passage in a book and has turned on Public Notes for the book, you'll see that passage highlighted along with the name of the person who highlighted it. You'll also see the notes that they made in the book. 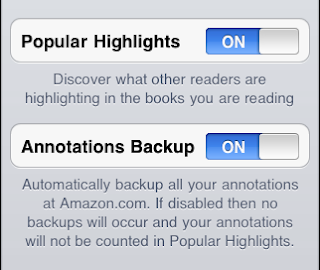 
Do you pay attention to the highlights other people have made in the books you read? Do you follow other readers specifically so you can see their highlights and notes? Or do you ignore highlights completely? Or find them so annoying you've decided to shut them off entirely?