The Sheik and I: Academics and Authors On the Sheikh Romance

I've been reading my way through the latest issue of the Journal of Popular Romance Studies, and my eye was caught by a pair of articles that focus on contemporary Sheikh romances. Reading the two side by side helped me understand why romance writers and scholars of the genre often find themselves at odds.

The first article, "Love in the Desert: Images of Arab-American Reconciliation in Contemporary Sheikh Romance Novels" by historian Stacy E. Holden, is far longer than the second, "Stacy Holden's 'Love in the Desert': A Response," by romance author Megan Crane—17 pages, plus 2 pages of "Works Cited" references, in contrast to Crane's less than 3 pages, with no sources cited. Academics are trained to point to past work that has been done in their field, and then build their own arguments in response. As one of the professors in my graduate English program once said, "You have to show how your work is intervening in the current critical conversation." Whenever a scholar writes an essay, s/he must show awareness of what previous critics have said about the topic, as well as explain how the argument made here differs from that previous criticism.

Crane opens her response essay by making it clear that she, like Holden, has an academic background: "I was an avid and enthusiastic reader of romance novels long before I found myself pursuing my doctorate in English Literature" (1). Crane's essay, though, does not follow the scholarly model of drawing upon previous sources to build one's argument. Instead, Crane uses her own experience ("I feel"; "I'd argue"; "I'd argue further") to frame the arguments she makes. Academics are sometimes told directly, and are certainly trained indirectly by examples, to avoid using "I" statements, a practice which results in prose that often makes the person doing the arguing disappear, replaced by a faceless voice of authority. I'm guessing that many romance authors find that faceless voice annoying, frustrating, or even oppressive, and struggle against its claims to authority by highlighting their own experiences, their own "I"s. But academics, trained to cite their sources, are likely in turn to find Crane's "I" arguments, unsubstantiated by citations from scholarly sources, less than convincing.

Holden's article argues the increase in the number of sheikh romances published in the wake of the 9/11 attacks, as well as the narrative patterns within them, "highlight the vast cultural differences between the Arab hero and the American heroine that will be overcome during the course of the book. In this way, they emphasize an implicit political fantasy that undoubtedly contributes to this genre's popularity in a post-9/11 world" (1). Crane takes issue with Holden's thesis, arguing that "As a life-long romance reader, former scholar of literature, and a current author of romances, I feel one could as easily substitute 'Scottish highlander' or 'Greek tycoon' for 'sheikh' and make many of these same arguments. Which is more persuasive? Your answer may have as much to do with your own background as anything in each of the essays. 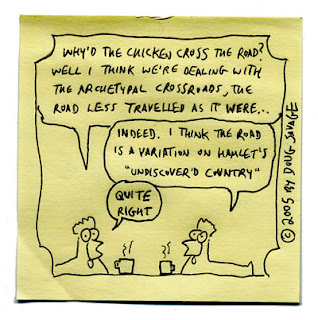 Both Crane and Holden employ literary theory to ground their arguments. But the theoretical lenses they each don are often viewed as antithetical by contemporary literary critics. Crane takes a universalist view, one most commonly associated with Archetypal literary theory: finding "recurrent narrative designs, patterns of action, character-types, themes, and images which are identifiable in a wide variety of works of literature, as well as in myths, dreams, and even social rituals. Such recurrent items are held to be the result of elemental and universal forms or patterns in the human psyche, whose effective embodiment in a literary work evokes a profound response from the attentive reader, because he or she shares the psychic archetypes expressed by the author" (Abrams 13). That is, archetypal critics tend to focus upon patterns that can be found across genres, across cultures, universal commonalities.

Though Crane cites no specific archetypal critics, she displays her archetypal leanings in statements such as these:

"The reconciliation fantasies that lurk within romance novels are between the heroes and heroines first and mainly, are not specific to any particular culture or even in some cases species, and are certainly not restricted to stories featuring sheikhs" (2-3)

"Romance novels are not the exclusive province of Americans or, indeed, Western women, and tus, the fears they strive to address lie more within the scope of human frailty and the darkness of the human soul than any purely Western, quasi-colonialist gaze on the shifting geo-political landscape" (3).

(emphasis in both quotes added by RNFF)


Archetypal criticism had its heyday in the 1950s through the 1980s, although many past and contemporary romance authors still embrace it (many of the writers in 1992's essay collection, Dangerous Men and Adventurous Women: Romance Writers on the Appeal of the Romance drew on archetypal arguments in their championing of the genre). The last decades of the twentieth century saw this school of criticism come under attack, though, from many different quarters: from feminists; from New Historicists; from critical race theorists, and others. Such critics pointed out the ways that all too often what was viewed as "universal" by archetypal critics was far more often a Western norm than a human-wide pattern. Universalizing, what was once seen as a strength, is now more often viewed as a weakness. Current literary critics, then, would likely not be very responsive to an argument based on archetypal tenets.

Though Holden, like Crane, identifies patterns, she uses culturally-specific, historically situated lenses to explore the meaning of such patterns. Each section of her essay presents a specific sub-argument that works to support her overall claim. First, she references two previous studies that showed a sharp increase in sheikh romance titles since 9/11 (six in 2000, eighteen in 2002) to back up her claim that there is something different about sheikh romances published before 9/11 and those published after. Then, she notes how the fictional sheikh kingdoms in romance novels leave out the urban settings common in contemporary Arab countries, preferring to focus instead on desert settings. Third, she points to the pattern of cultural clashes in the novels she examined, clashes between male Arab sheikhs and their Western female loves. Finally, she analyzes how these clashes are resolved, finding that "The careful negotiation between sameness and difference... —ultimately, sameness is primary, though difference must be there—can also be found in any given sheikh romance's denouement, and in the political fantasy offered in it" (13).

What makes Holden's essay particularly fascinating is that she does not just draw on the sheikh texts themselves, but also on interviews with eleven authors and two editors of sheikh romances, to back up her claims. Many literary critics have moved beyond the "intentional fallacy" (trying to read a text and guess an author's intentions) to Barthes' "Death of the Author" position—the belief it is a mistake to cede the interpretation of a text to its author, even if its author has openly stated what s/he intended when s/he wrote it. Holden, in contrast, finds value in an author's take on the text, so much so that she conducted interviews with eleven authors and three editors of sheikh romances to find out their thoughts on the works they had created.

Holden's interviews demonstrate that the authors of sheikh romances themselves typically intend their books to be culturally positive: "I would love to think that we are in some way getting people to look at other people and other places, and saying it doesn't all have to be, you know, American Velveeta cheese on white bread" says Sandra Marton (14). But at the same time, she uses her interviews as only one of many types of evidence she brings to bear in her analysis. And ultimately her analysis demonstrates that there is often a gap between what an author intends and the cultural work the text she produces actually accomplishes:

Marton and other authors express the desire to break free from the negative stereotypes of Arabs put forth in other media via the vehicle of romance, a worthy intention indeed. In order to accomplish this goal, however, authors sometimes suppress certain aspects of Arab culture and contribute inadvertently to Orientalist discourse" (14).

Read skeptically, against the grain, these novels present a fantasy in which autocratic leaders of the Arab world—those sheikhly heroes who love American women—embrace the values of their Western fiancées and wives, reconciling their two cultures in a way that secures and privileges American interests. But read more generously, in light of their authors' intentions, the sheikh romance novel does present a hopeful vision of the world, one which exchanges Huntington's Clash of Civilizations for a world in which the class between individuals from two worlds, now at odds, is ultimately an erotic clash: one which leads them to fall in love, resolve their differences, and live harmoniously together" (17).

"Do contemporary sheikh romance novels fetishize Arabs and subject the to the unwavering, privileged glare of the Western imagination as Holden asserts? Or is there a way in which all stories of the beloved fetishize and objectify the beloved—both heroine and hero in their turn, regardless of their cultural background or racial make-up, across all subgenres of romantic fiction?" (1)

Crane, then, misreads Holden, just as she claims Holden misreads sheikh romances. And just as many romance authors feel scholars of romance do...


I myself find Holden's arguments far more persuasive than Crane's. But then, of course, I was trained as a literary critic. I'm curious to hear whether other romance readers, those not familiar with the debates between and assumptions by academically-trained readers will feel the same.

If you're curious. both Holden and Crane's essays are available online: