A Fantasy Heroine with no Superpowers? Meljean Brook's THE KRAKEN KING

I've been a big fan of Meljean Brook's Iron Seas series, especially of Heart of Steel (#2) and Riveted (#3). But when I heard that the fourth book in the series, The Kraken King, was to be published in serial form, I decided to hold off until the entire book was available. A fan of Victorian literature yes; a fan of Victorian-style publication, sometimes; a fan of paying $1.99 per part for an 8-part serial, thank you, no.

The publication date for serial-as-book came and went, though, and somehow I never pulled The Kraken King to the top of my TBR ebook pile. Only after my teen daughter began plowing through every fantasy romance book could recommend to her this past summer, including Meljean Brook's Iron Seas titles, did I remember that I myself hadn't yet read the latest addition to the series. 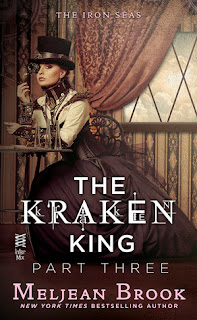 I'm sorry now that I waited so long to dive in. For while this steampunk fantasy is named after its hero, the real star of the show is its writer-heroine, Geraldine Gunther-Baptiste, otherwise known as Zenobia Fox. Despite penning popular serials about the adventures of treasure-hunter Archimedes Fox, Zenobia has long been a stay-at-home, content to remain in the shadows. First, to keep out of the way of an abusive father; then, to put off would-be suitors after they discover her relation to the actual Archimedes, a wealthy treasure-seeker; and, then, as depicted in Heart of Steel, to seem as innocuous as possible while enduring several kidnapping plots designed to bring her brother down. While her brother "flung himself at every peril," Zenobia is content "to observe it from a safe distance" (9).

Unlike Zenobia, the heroines of Brook's previous Iron Seas books had all been empowered, kick-ass warriors, fighting side by side with their equally kick-ass future mates. How would Zenobia, whose greatest superpower is her ability to wield a pen, survive, never mind prove herself heroine material, I wondered?

The opening of The Kraken King has Zenobia taking a small step out of the shadows, leaving home and hearth to set off halfway across the world with a childhood friend who is traveling to the Red City in Australia (in the alternate history Iron Seas world, Europe has been overrun by zombies; the "Golden Horde" [i.e. the Mongols] control much of the world through despotism and nanotechnology; and Australia has been partially colonized by Nippon [aka Japan]). Though in the wake of multiple kidnappings, Zenobia has hired two bodyguards (just in case), nothing of much event has occurred during the journey—just as she expected. 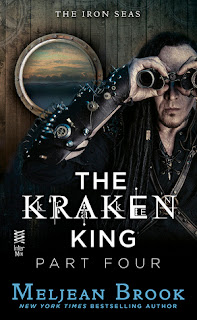 Until, that is, they reach the western coast of Australia, and their airship is attacked by unidentified marauders. Current manuscript and store of gold in hand, Zenobia jumps from the doomed airship—and is pulled from the ocean by a man straight out of the most fantastic adventure story. Ariq, the Noyan or leader of Krakentown, a Mongol settlement on the Australian coast, is larger, stronger, and physically more powerful than anyone that Zenobia has ever met. Known as the Kraken King (because once he gets something or someone in his grip, he never lets go), Ariq had once been a major player in the rebellion against the Mongol ruler. But when the rebel leaders began fighting with themselves over who would take power once the Khagan fell, Ariq felt the need to distance himself not just from their infighting, but from the rebellion as well.

Sounds like the perfect set-up for a he-man rescues imperiled woman storyline, no? But in Brook's capable hands, Zenobia isn't forced to magically transform into a warrior-woman fighter or to reconcile herself to playing the damsel in the typical damsel-in-distress storyline. How?

In part, because Brooks uses an alternating point of view narrative, a narrative that shows us Zenobia through Ariq's perceptive eyes. Ariq falls for Zenobia almost the moment he first sees her—but not from unmotivated "insta-lust." As Brook's describes it, "he remembered her expression when she'd jumped from the falling balloon. Serenity. Acceptance. As if her entire life had been leading to that moment and she faced it without fear" (30). Fighters, Ariq knows, are not the only ones who are brave. And when he begins talking with the woman he's pulled from the sea, and discovers that she also has a sense of humor as well as a quick, agile mind, he's even more drawn to Zenobia. Her unremarkable face, her unremarkable hair—none of it matters, not after he first looks into "her eyes like jade stones lit by an inner flame.... There was nothing unremarkable behind those green eyes—and this woman might have the power to lay waste to him. But if she did, he didn't want to fight it" (37). Throughout the story, Ariq interprets Zenobia for us, showing us how our expectations of heroine-ism might be blinding us to the kind of heroine that Zenobia is. 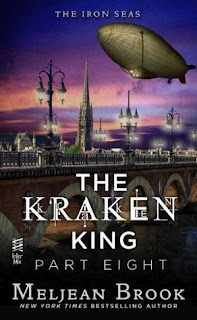 Also in part because Zenobia does undergo a transformation over the course of the novel, though it takes place internally, rather than externally. All her life, Zenobia has waited—waited for her abusive father to leave on another trip; waited for her suitors to tire of her; waited for Archimedes to bring the ransom and rescue her from her kidnappers. But when Zenobia is captured by a former ally of the Kraken King's, an ally who now wants to use her to manipulate Ariq, Zenobia is no longer content to be a pawn in others' machinations. She knows that Ariq, or her bodyguards, or her brother will eventually come to save her, and that it might make more sense to wait, now, too.

But she couldn't bear to wait. She couldn't bear to let Ghazan Bator determine the course of her life. She couldn't bear to let anyone decide who she would be or what she would do. Not anymore. And the thought of staying here on this ironship with a man who would use her to frighten her friends and threaten thousands of others? Who would wield her like a whip on Ariq's back? She'd rather burn the ship down and sink with it.
Yet far better to escape—even if she died trying. And if this meant her death, maybe the effort would be all for nothing.
But if she lived, that effort would mean everything. (303)

Zenobia does not train to be a fighter, nor does she magically gain new skills that enable her to overcome stronger foes. But she does discover the power of refusing to be driven against her will, a power that she will have to draw on throughout the second half of the novel in order to survive.

And finally, because Brook brings Zenobia to the realization that courage does not mean a lack of fear. In fact, fear is at the very heart of courage—the courage to fight against tyranny, yes, but also the courage to accept love. 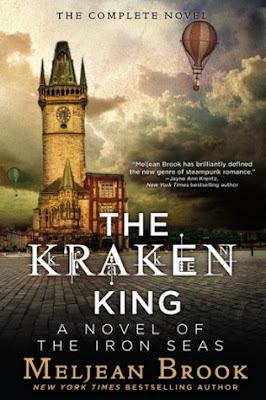 Meljean Brook
The Kraken King
Berkley, 2014
Posted by Jackie C. Horne at 9:00 AM