A while back, I wrote a post about romance writers who used the word "bitch" in their novels, and the possibilities of reclaiming that derogatorily-gendered term from its sexist roots for feminist purposes. Of late, though, I've been bugged by a quite different gendered insult, one that seems to be coming up more and more frequently in the contemporary romances I've been reading.


Blake nods fervently. "Blast from the past, huh? Those are awesome. Well, not always. Sometimes they suck. You know who called me out of the blue last week? This douchebag I knew in high school—know what he wanted? For me to bang his girlfriend.  . . .  Turns out this chick's dream was to bone a pro hockey player, and the douchebag thought it would be a nice birthday present for her." (Elle Kennedy and Sarina Bowen, Us)


"Guys? Thanks, but don't worry. I can handle myself," she said. "I can defend myself. And I can prove to this douchebag that I can code."
Abraham's eyes gleamed. "Game on, Peach." (Cathy Yardley, Level Up: A Geek Romance Rom Com)


Ah yes, the oh so disgusting "douchebag." In each of the above romances, all of which featured empowered women and enlightened men negotiating their (hetero & queer) romance lives with skill, insight, and aplomb, the insult "douchebag" is tossed out to denigrate a male who denigrates women. In Level Up, heroine Tessa uses it to indicate that her fellow computer programmer colleague Abraham is a jerk for assuming that because she is a woman, she cannot code as well as he can. In Us, secondary character Blake uses it to indicate that a guy who thinks that giving his girlfriend a birthday present consisting of the chance to sleep with a famous sports star is a misogynist.

And in Anticipation, heroine Blue uses the term to describe the male protagonist, who, at the start of the story, is not at all ready for hero status. By calling Eddie, her best friend (and 10-year crush) a douchebag, Blue makes it clear that Eddie's penchant for ignoring her whenever he had a girlfriend, and then expecting her to be ready to party when he breaks up with said girlfriend, is not okay. Later in the novel, Eddie even applies the term to himself when he recognizes how poorly he treats Blue, "since you put your cock first pretty much every time," suggesting that he's moving in the right direction on the "respecting women" learning curve and getting closer to achieving hero status (Kindle Loc 774).

In all these books, "douchebag" is used as a putdown of sexist men. But I had always associated it with sexism, hence my distaste for the word. How did two such opposite connotations adhere to the same word? A short foray into the history of the douche seemed in order...

I first heard "douchebag" from the mouth of Sgt. Mick Belker, one of the more colorful characters on my favorite television show of the early 1980s, Hill Street Blues. Mick, an undercover copy, often dressed as if he lived on the streets, all the better to fit in when he was in the middle of an investigation. He talked to the criminals he arrested as if they were dogs ("Sit, hairball"; "Sit down, dog breath"); growled at them as if he were a canine; and rained a colorful shower of insults down on their witless heads, including the memorable "dog drool," "kidney bag," and, of course "douchebag." I could be wrong, but I recall "douchebag" changing over to "dirtbag" fairly early in the show's run, perhaps because the insult was considered too raw for prime time TV.

I didn't really connect Mick Belker's insult to the print ads and television commercials I occasionally saw for a feminine hygiene product called a douche. I didn't use a douche, nor did any woman I knew. So it wasn't until my women's studies classes at college that I understand why being called a "douchebag" would be considered an insult, one applied exclusively to men.

A comment on a post on the Dialect Blog entitled "On the Evolution of 'Douchebag'" gives a succinct explanation of the sexism inherent in the term:

It is an insult more because a douche bag is used by a woman to clean her vagina. To call a man (you never call a woman a douche bag) a douche is the lowest insult. Our society is very male centered right now so it makes sense that anything having to do with the lowly woman would be a great insult to a male in this macho culture. It is the same as being called a tampon or a pussy. If it is female it is derogatory. This furthers the misconception of women as "unclean" or dirty, especially when menstruation is concerned.

A douchebag holds the water or other liquids used to clean a woman's (purportedly dirty) vagina (or, in some cases, stores the water after it has been used to clean said vagina). So, the insult in being labeled a "douchebag" lies in the word's association with women's bodies, in particular, women's sexual bodies. If you're a douchebag, you're not just disgustingly effeminate, you're marked by a particularly female taint. Hard to argue with the sexism of that.

But it turns out that the history of the word "douche" makes the connotations of the term "douchebag" a bit more complicated. 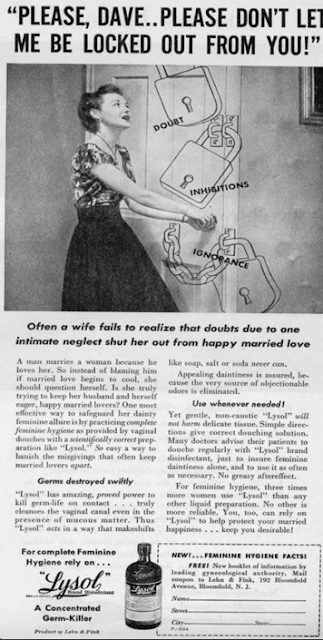 Douche, coined in the 16th century from the French word for "shower," originally referred to "a jet or stream of water, or the like, applied to some part of the body, generally for medicinal purposes." But by the early 19th century, the word had taken on a more specific meaning: "a jet of water (or a solution of water and other substances) introduced into the vagina as a means of cleansing the uterus and cervix, treating infection and haemorrage, or esp. preventing conception after intercourse" (OED) (note: the douche is NOT an effective method of birth control).

A medical technique became a commercial product in early 20th century America, when male advertisers began to sell douches as female contraceptives (albeit via euphemistic wording). From the 1920s to the 1950s, douches were aggressively marketed to women with one part shame and one part "science": "One most effective way to safeguard her dainty feminine allure is by practicing complete feminine hygiene as provided by vaginal douches with a scientifically correct preparation like 'Lysol'." Yes, that Lysol. (See this informative post by Historiann for more of the horrifically sexist details).

In the 1960s, after the introduction of the birth control pill, fewer women relied on douches for contraception. Drawing on the new popularity of feminist discourse, advertisements shifted away from male science and towards female sharing. Rather than panicked wives, ads began to feature reassuring mothers counseling their concerned daughters to use Massengill or other douche preparations to rid themselves of that "unfresh" feeling "down there." Or smart, intelligent women, who wanted to show their friends how to instill "confidence," or feel "natural" by douching. Douche as empowerment? Just check out the Massengill ad below.


You can still by douches in your local pharmacy, despite increasing medical evidence of their harmful effects (PubMed lists a 1918 "A Clinical Lecture on The Bad Habit of Vaginal Douching," pointing to a very long history of warnings against the practice). Why?


So, on the one hand, "douchebag" is a deeply sexist insult, one that relies on the belief that women's bodies and women's sexuality are by their very nature filthy and in need of cleaning, and that being the end recipient of the results of that cleaning is the most disgusting thing a man could ever imagine.
But on the other hand, the word points to the sexism of the men who created the douche as a commercial product, and used fear and shame of female bodies to market it to the female American masses.

Who would have thought that one small word could be such a double-edged sword?


What comes to your mind when you read the insult "douchebag" in a romance novel? Sexist insult? Or empowered dissing of sexism?