In her latest contemporary novel, Roan Parrish proves herself as adept at writing m/f romance as she in crafting compelling stories of m/m love. The narrator of Small Change, Ginger Holtzman, dropped out of high school at age sixteen to work as an apprentice in a Philadelphia tattoo shop. Eighteen years later, she's now the proprietor of said shop, the only female-owned tattoo business in the city. Being un-tattooed myself, I didn't know that the tattoo industry has a history and reputation of being so male-dominated. But Ginger certainly does:

The number of talented artists drummed out of the business by macho posturing, unwanted sexual behavior, and abuse, not to mention good old-fashioned misogyny, was staggering. I thought of them often, the ghost crew of talented women who were the casualties of that toxic attitude. I thought of how different the industry could be—how much better—if they had a place in it.  (Kindle Loc 918) 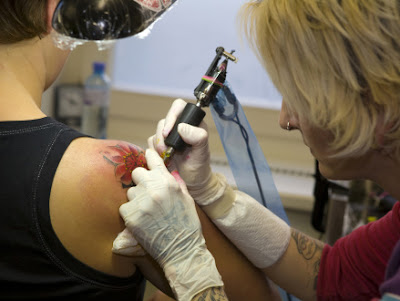 Ginger has actively tried to create a more accepting vibe in her own shop, a place where both men and women, no matter their race, sexuality, or gender identification, feel safe and welcomed. Employing a trans man and an African-American woman as co-workers goes a long way towards creating such a vibe, as does Ginger's own refusal to take shit from anyone.

Unlike many other romance novels, which give a protagonist a job in a male-dominated profession to establish said protagonist's feminist cred, but then don't portray said job making much of an impact on the character's actual values or goals, tattooing is deeply embedded not just in Ginger's skin, but in her soul:

It . . . confronts you with yourself. With the things you've thought, felt, done. You can't pretend something didn't happen if it's on your skin. You can't forget. And they're also a way to retell the story, I guess. You know, like, if something bad happens, a lot of people get a tattoo. Not because they want to remember the bad thing, but because once they've lived through it, or figured it out, then every time they look at the tattoo they remember that process. Tattoos are the scars you choose. (586-88)

Ginger's "unchosen" scars stem from her family, who have never understood why she could not mold herself into something closer to the feminine norm that her mother and sister both so easily inhabit. And from the reaction to her gender queerness from other kids when she was a child, and even now, as an adult:

I'd been teased and dismissed for not being pretty, for not dressing like I wanted people to think I was pretty, for being outspoken, for not taking shit. In other words, called a bitch or a dyke or a freak at school" (159)

I always looked mad, people told me. My mouth naturally turned down at the corners, so even my neutral repelled the world"(472).


Ginger might have tried to conform to please her family and schoolmates. But "instead of changing, [I] squared my shoulders and rejected their premises" (472). Choosing not to graduate high school, working in a job that her conventionally middle class parents feel is far beneath her, engaging in monogamous romantic relationships with both men and with women—all of Ginger's life decisions have been made on her own terms, and without shame.

Living such a "fuck you" life has made Ginger pretty reluctant to open herself up to other people: "I'm pretty bad at doing things that make me feel like I'm leaving myself open for a hit, you know?" Ginger confides. But ever since her best friend Daniel (of Parrish's first novel, The Middle of Somewhere) moved to rural Michigan for a teaching job and found himself a boyfriend, Ginger's been feeling at sea, "always about to reach for something I kept forgetting wasn't there anymore." Which may be part of the reason why she finds herself so attracted to the owner of a new sandwich shop that has opened just down the corner from Small Change.

Thirty-something Christopher Lucen has a personality as sunny as Ginger's is spiky. He greets each customer to his shop with a friendly smile and a personal inquiry about their food or their day, not just to gain a good tip but because he is really interested in knowing. He brings Ginger, who is so busy with work and with preparing for her own art show that she often forgets to eat, coffee and sandwiches without her even asking. And he enjoys giving hugs. 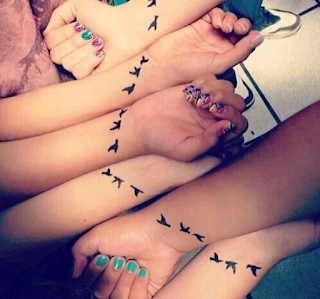 But despite of their differences, each is unaccountably drawn to the other. And they begin a tentative relationship, one in which caretaker Christopher gives all of himself. But Ginger has a hard time trusting Christopher, or perhaps herself, enough to do the same. And when a blow-up in the social online community of the tattoo world ends up misogynistically making Ginger a target, not even Christopher's good will and good intentions can keep Ginger from lashing out. Does Ginger have to make a choice between being with Christopher, and maintaining her hard-won independence? Or is there room in her life for both?

There are so many terrific feminist moments in Parrish's book, many focused on refusing the dominant romance trope of competing with other women by denigrating them. For example, Christopher has only good things to say about his female ex'es. And Ginger points out how

. . . a big part of sexism in the industry—and most industries—is this idea that they rightfully belong to men, so there's only a limited amount of space that women have access to. And that leads to this sense that we have to compete with each other in order to get the few spots that are set aside for us. But of course, it isn't actually that way—that's just the way they want it to feel. (2954)

And the response to the online bullying that Ginger's devises with other female tattoo artists, one that encourages women to "have one another's backs" rather than knock each other just to get a seat at the table. But the novel's feminism never seems tacked on, a message weighting down the romance. Instead, it feels vitally connected to who Ginger is, and how she wants any romantic relationship she engages in to be imbued with the same sense of egalitarian respect that her relationships with her friends and colleagues are. 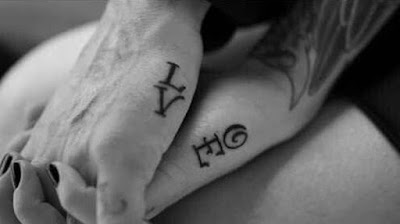 In perhaps my favorite lines in the book, in response to Ginger asking him why he wants to get to know her better, Christopher tells her,

"Did you ever find a new band or author or director or something, and you were instantly fascinated? You heard one song and wanted to get all the rest of their stuff. Sure, you didn't know what it'd be, and yeah you probably weren't gonna like every single second of it the exact same way you like the bit you just found. But you can just tell from the part you've found that you want to know the rest?" (1075)

I haven't "liked every single second" of every single Roan Parrish romance novel I've read. But I've found myself "fascinated" by each, especially this latest.  It may just be my favorite feminist romance of 2017. 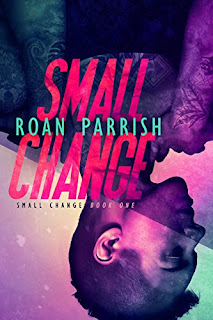