Heterosexual genre romance is filled with heroes whose professions are all about public service. From firefighters to Navy SEALs, CIA agents to cops on the beat, male characters who their lives on the line for the greater good rank high in the standings of readers' favorite romance heroes.

But what happens when the society in which you live considers the police something to be shunned, rather than celebrated? Where dating a cop is tantamount to fraternizing with the enemy? These are questions that Tasha L. Harrison's The Truth of Things made me consider.

On her way home from an evening with friends, photojournalist and wedding photographer Ava Marie Greene tries to shrug off catcalls from the small-time drug dealers who hang out on the corner in her northside Camden New Jersey neighborhood, "a few blocks from the reach of gentrification" (Kindle Loc 86). But the call-outs escalate until Emiliano, another dealer with whom Ava is friendly, intervenes. Before Ava can de-escalate the confrontation, Emil and another dealer are brawling, and the police are on their way.

For Ava, the sound of sirens and the flash of blue lights don't offer the same reassurance that they would to a white person in a suburban neighborhood: "I wish I could say that I was relieved to see her [the cop], but to me, it felt like another gang had rolled up. One that was just as unpredictable as the boys with their bellies on the sidewalk" (131). Ava's suspicion proves warranted; the cop treats her with as much aggression as she does the fighting men, shoving Ava to the ground and breaking one of her expensive camera lenses. The cop, Stevenson, "looked like she could be a Latina or maybe mixed. Not that it mattered. All cops were one color. Blue" (193).

But the aggressive cop is soon joined by another, an African-American man who dials down the antagonism, even apologizes for his fellow officer's behavior. And insists on walking Ava home. But in Camden, even such an apparently chivalrous offer can be dangerous to accept. The officer tries to get his flirt on with Ava, but she shuts him down: "Well, kind sir. Thank you for escorting me to my front door after a lovely evening of street and police harassment" (224).

Ava is expecting that to be the last of Levi Raymond. Yet after she runs into him again at the Camden police station, where she's gone to file a complaint against the officer who damaged her property, Officer Raymond proves he's a bit more persistent than Ava had originally realized. Going out for a "I'm sorry" cup of coffee would not be the same as dating a cop, would it?

When Ava begins to tutor Emil in photography, though, the thought of her impending not-date is sitting pretty uncomfortably: "A girl who just offered to mentor a drug dealer, who cared about racial injustice, and the plight of the common man had no business having a casual cup of coffee with a cop" (650). But even though Ava tries to break her date, she and Levi end up talking—and then meeting, and then meeting yet again. Because the presumptuous, arrogant officer also does something no man has done for Ava in a long time—puts a smile on her face.

As Ava and Levi get to know one another, Ava discovers Levi is far from the stereotype of the cop who bleeds blue. He's kind, and honorable, and is interested in Ava's photography work; his parents are devoted lovebirds; and he spends his free time volunteering at the local Boys & girls Club. And he apologizes so easily, far easier than wary Ava. Ava, used to family letting her down (her father abandoned them when she was young, and her mother abandoned her for drugs), gradually begins to lower her defenses. 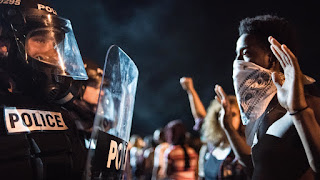 But when a police shooting rocks Camden, Ava and Levi are right in the middle of it, both professionally and personally. And when, in the face of police apathy about the shooting, Ava tweets out a video of the incident, sparking explosive public protests against the Camden police department, will Levi side with Ava and the protesters? Or with his department and fellow officers?


Many romance readers defend the genre by arguing it is a form of pleasurable escape, a way for readers to stop thinking about the problems of their lives for a few hours while they turn the pages of a book, a book in which the only real conflict is between potential lovers. After reading Harrison's romance, though, I began to wonder if even the idea of escaping into a romance novel is built on a certain assumption of privilege. What I mean is, just as white Americans, because of the history of white dominance in American society, have the privilege of not thinking about race all the time, but people of color do not, perhaps the option of escapist reading of all types is equally one reserved for the economically and racially privileged.

And perhaps romance novels that attempt to grapple with race and racism could help readers escape from their escapist romance blinders. If only for a few short hours...

"I don't know if I'm going to be able to do this."
"Yes, you can," he said. "You want to know how I know?"
"How?"
"Because you're strong. Stronger than me. You've already been through so much, Ava. You're the strongest person I know."
People were always saying that.
Ava, you've been through so much. You're so strong.
For the first time, I allowed myself to say the one thing that was always on the tip of my tongue when people said that. "I wish I didn't have to be." (3889) 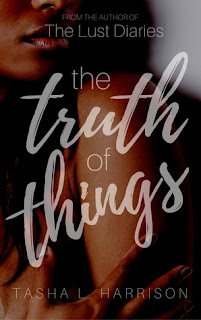 Tasha L. Harrison
The Truth of Things
Dirtyscribbler Press, 2017
Posted by Jackie C. Horne at 9:00 AM