It don't breakeven... Gayle Forman's WHERE SHE WENT

After spending six+ hours in a car with a fourteen-year-old this past weekend, I have first-hand evidence that the songs on just about every pop music station are almost always about falling in love. Running a close second, however, are songs about falling out of it. While Neil Sedaka famously crooned that breaking up is hard to do, apparently singing about the end of a relationship is not nearly so tough. 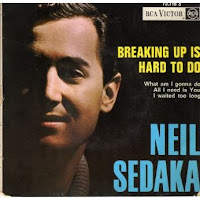 Unlike pop music, popular romance fiction rarely focuses on the breakup, at least a final, absolute breakup between two lovers who truly care for one another. Instead, romance offers the trope of the separated lovers, their relationship broken apart (usually through no fault of their own) sometime in the past, before the action of the novel begins. During the course of the typical separated lovers story, the hero and heroine recognize the signs they misread, or discover the evil figures who tricked them apart (cruel parents, jealous siblings, rival lovers), and mend the breaks that have kept them apart, making them miserable for months (or more often, years).

Young Adult romance* rarely features the separated lovers trope; given the typical age of its protagonists and their relative lack of romantic experience compared to their adult romance brethren, such a finding is not that surprising. To discover a YA romance that dances on the edge between breakup and separated lovers is rare in itself, but to find one that also tells its story from the point of view of the male in the relationship seems well worth looking at from a feminist perspective. Especially when the writing in the book is as good as it is in Gayle Forman's Where She Went.

Back in high school, Adam Wilde and Mia Hall were known as "Groovy and the Geek." Adam wrote songs and played guitar in an emo-core punk band, while Mia devoted herself to classical cello. The story of how two such disparate teens came together, as well as the horrific accident that broke apart Mia's family, is told in Forman's previous novel, If I Stay. Where She Went begins three years later, long after Mia, who moved to New York City to study at Julliard, gradually stopped returning Adam's texts and phone calls. The action of the novel, told in the immediacy of the present tense, unfolds over a single night and day; Adam recounts the events that led up to this day via memories interpolated between the current action.

In the now, Adam's a troubled, alienated rock star, having risen to fame on the strength of the songs he wrote after Mia dumped him (lyrics from that album—Collateral Damage—serve as epigraphs for the book's even-numbered chapters). Both on the verge of leaving for a 3-month tour of Europe and on the verge of a personal breakdown, Adam attempts  to lessen the anxiety caused by the grind of the spotlight, unresolved grief, and an overly inquisitive reporter by walking the streets of the city alone. But instead of finding the solace he seeks, Adam comes across a poster advertising that evening's performance at Carnegie Hall: YOUNG CONCERT SERIES PRESENTS MIA HALL. Deciding to violate "the three-year restraining order she basically put out on me," Adam buys a rush ticket, telling himself he'll be content to hear Mia even if he can't see her (54).


But such is the fame of Shooting Star and its lead songwriter that even the crew at Carnegie Hall recognizes Adam. Instead of signing the expected autographs, though, he finds himself being invited backstage. To see Mia, the girl who told him she loved him more than life itself before she stepped on the plane to New York three years ago. To Mia, the girl who never came back.


Mia, on the verge of departing for her own concert tour to Japan, invites Adam to accompany her on a farewell tour of NYC. But will it also a final farewell to Adam, providing closure to their unofficial breakup, a closure Mia never gave him? During the night and day that follows, Adam and Mia dance painfully along the edge of revelation, the weight of what isn't said far more meaningful than the awkward commonplaces that are all either can initially bring themselves to offer. Later, as Mia gradually begins to tell Adam about her life since leaving him, and her feelings about the accident and her lost family, Adam cannot stop himself from reading each statement as a potential rejection. But finally he allows an unscripted emotion to escape, discovering the courage, or perhaps the anger, to ask Mia why she left.

Forman doesn't offer the typical romance excuses of a misunderstanding, or interfering friends or parents; instead, Mia's heartbreaking answers point to the pain even those we love, and who love us, can cause. Even when (perhaps especially when) they are trying their hardest to help:


"All I wanted was for you to be okay. All I wanted was to help you. I would've done anything."
She drops her chin to her chest. "Yes, I know. You wanted to rescue me."
"Damn, Mia. You say that like it's a bad thing."
She looks up at me. The sympathy is still in her eyes, but there's something else now, too: a fierceness; it slices up my anger and reconstitutes it as dread.
"You were so busy trying to be my savior that you left me all alone," she says. "I know you were trying to help, but it just felt, at the time, like you were pushing me away, keeping things from me for my own good and making me more of a victim." (184)

Unwilling to continue to play the victim, Mia makes the (feminist) choice to reject self-sacrifice, even if it means sacrificing her relationship with the man she loves:

"You wrote, 'She says I have to pick: choose you, or choose me. She's the last one standing.' I don't know. When I heard 'Roulette' I just thought you did understand. That you were angry, but you knew. I had to choose me."
"That's your excuse for dropping me without a word? There's cowardly, Mia. And then there's cruel! Is that who you've become?"
"Maybe it was who I needed to be for a while." (186-87)

Forman's novel contains many other understated feminist moments. One of my favorites is Adam's dismay at the realization that he's allowed himself to degenerate from being a "Man" to being a mere "Guy":

One day she'd told me that they'd decided that my gender was divvied into two neat piles: Men and Guys. Basically, all the saints of the world: Men. The jerks, the players, the wet T-shirt contest aficionados? They were Guys. Back then I was a Man....
She's right. I am a Guy now. And I can peg the precise night I turned into one. (144-45)

Others include his recognition of what playing music really means, and especially the decision he makes about the direction his career will take once's his finally made his peace with Mia. Needless to say, this is not a book that makes a heroine give up what she loves doing in order to be with her man.

On which side of the breakup/separated lovers divide does Adam and Mia's story ultimately end? That Forman manages to keep readers unsure even up until the final chapters is not only a testament to her skills as a writer, but also to her ability to re-create a unique, and feminist, romance by experimenting at the boundaries of existing genre tropes.

*Unlike the RWA, which, through its recent change in their RITA award qualifications, has narrowed its definition of "romance" for the YA audience, I take a broader view in this blog, considering literary YA fiction as well as that packaged specifically as "romance."


Next time on RNFF: The origins of the phrase "pornography for women"