You've all read them, those lines in romance novels meant to explain away some difference or conflict between the hero and heroine. A girlfriend tells the heroine, "Don't worry, everyone knows men hate talking about their feelings" when her new love interest won't discuss last night's disagreement. Or a buddy jokes to his newly engaged best friend, when dragged along to the mall by his fiancée: "Get used to cooling your heels, Jack. All women love to shop." Or the hero dismisses the heroine's attempt to figure out why he's breaking his promise to go see her beloved ballet company perform, saying "You wouldn't understand. It's a guy thing..."

Realistic lines, perhaps, echoes of ones we hear almost every day. They're used, of course, to explain what to the speaker are natural, obvious differences between the sexes. Or are they?

When you stop to think about it, such statements are rarely true of all men or all women. Yes, many men don't care to discuss their feelings, but I know quite a few who are quite ready to bend my ear telling me their latest emotional triumphs and woes. Yes, many women do love to hit the shopping center hard, but I also know quite a few who despise shopping more than a visit to the dentist for root canal. For any statement you can find that attempts to categorize behavior by assigning it exclusively to one gender or the other, I'll bet I can find at least one person (and in most cases, many people) who doesn't conform. I'll bet even the people who utter such statements would, if pressed, admit that they know someone who undermines the truth of their own generalization.

So why do authors keep writing such statements and putting them in the mouths of their characters? Sexism? Laziness? Because they really live in such a culturally homogeneous place that every man really does act like every other?

I've been pondering the possibilities, and I'd like to throw out a few here for your consideration:

In a romance novel, when the gender statement is said with a touch of tolerant amusement, and refers to the male sex ("Oh, men!"), the pleasure offered to the (presumably female reader) is that of feeling superior. Men, silly creatures, they can't talk about their feelings. Aren't we women special because we can? 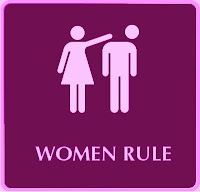 While such superiority may make us feel better in the face of messages that denigrate characteristics typically associated with being a member of the female sex, it's a temporary fix, I'd argue, and one that does little to advance equality between the sexes.

If a romance includes not only "guy" statements, but also "girl" statements, then the pleasure in feeling superior is no longer at issue (or if it is, it is a pleasure that moves back and forth between feeling superior and feeling inferior). Perhaps the pleasure in this case lies in the assertion of difference. Men are x and women are y, so very different one from the other; in overcoming such vast differences by novel's end, the heroism of our protagonists strikes us as far more vast than it would have if gender differences did not exist. 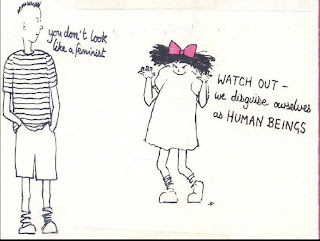 I wonder, though, if this isn't just a shortcut on the part of writers, relying on gendered stereotypes to build conflict between their protagonists rather than on detailed character development? Bridging the gap between two different human beings, no matter their sex or gender, seems a far more monumental a task than bridging the gap between a stereotypical man and a stereotypical woman.

Psychologist Janet Shibley Hyde's 2005 meta-analysis of previous scientific studies of gender differences argues that males and females are similar on most, but not all psychological variables. In her 2010 follow-up study focusing on gender differences in sexuality, she discovered an even more intriguing fact: "nations and ethnic groups with greater gender equity had smaller gender differences for some reported sexual behaviors than nations and ethnic groups with less gender equity" (21).* Yet even today, seven years after the publication Hyde's "The Gender Similarities Hypothesis," the difference model, which argues that males and females are vastly different psychologically, continues to dominate both the popular media and conventional wisdom, and much romance writing.

Sometimes, though, difference leads not to pleasure, but to pain. When the romance hero does not act, or think, in the way the heroine expects (and vice versa), it can be easy to explain away the resulting frustration by pointing the finger at gender.  Excuses that attribute problems of communication to gender, rather than to individuals, let romance characters, and through them, romance readers, off the hook. "Can't help it honey, it's just the way women/men are!" The protagonists in such romances often come together only because of sexual attraction, rather than because of any sense that they truly understand one another, making it difficult to believe that their "happily ever after" will continue after the first blush of romance wears away.

And of course we have the crass commercial reason: if all women think the same way, then publishers only have to create one type of romance, and repeat it ad nauseum. If some women like alpha heroes, while others like beta heroes, while still others like stories of two women together, that makes it far more difficult for a publisher to produce the bestsellers that will appeal to "all" romance readers. Buying into the myth that all men or all women think, act, or believe in the same way means simultaneously buying into the reader that publishers have constructed to aid their sales.

The concept of gender policing comes from queer theory, suggesting that gay and transgendered individuals are often on the receiving end of pressure to conform to more conventional gender norms. But everyone is subject to such policing, not just those who obviously don't act "masculine" or "feminine," as recent studies by sociologists and ethnographers have come to show.** We receive messages about how to act "feminine" or "masculine" from the time we are infants, from our parents, our teachers, our peers. Don't yell and scream, it's not ladylike. Don't cry; boys are tough. Girls like pink and princesses. Boys like trucks and guns. Men who have casual sex are studs. Girls who have casual sex are sluts. 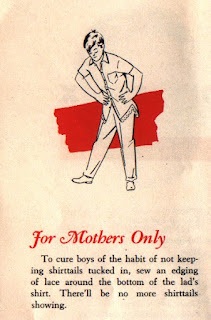 By the time we become adults, most of us have internalized such messages, and have come to believe that what we were taught is actually simply the way it is. Even when we are confronted by people who do not follow the gendered patterns we've come to take for granted, we don't change our statements; instead, we simply consider these odd people exceptions that prove, rather than disprove, the rules. Other people are easier to understand, after all, if we can put them neatly into labelled boxes, and if they act according to the rules of the box in which they've been placed.

But not all people fit comfortably within those boxes. And many refuse to step in them, or allow others to push them in. Their refusals remind us of our own acceptance, our own choice to step into the boxes. And sometimes that reminder can be shame-inducing, pointing to the moments when we lacked the courage to do what we wanted, to be what we are.

And this is one of the less than amusing purposes of "men are all..." and "women are all..." statements: not to state an obvious truth, but to ostracize those who make us uncomfortable, or ashamed of our own lack of courage.


Feminism doesn't mean that all girls should be tomboys, nor does it mean that princesses and pink should be banned from every girl's room. But it also doesn't mean that all girls should have to be princesses, or all boy should have to like trucks (or to dislike talking about feelings, or whatever other manly characteristic or pursuit an author deems the key to all masculinity). So next time you come across one of those "it's a guy thing" statements in your romance novel, take a moment to stop and think about what purpose it is truly serving.


Photo/Illustration credits:
• "I have feelings..."
• Women Rule
• Feminsts disguised as humans
• For Mothers


Next time: RNFF Book Review of Where She Went
Posted by Jackie C. Horne at 9:00 AM