Ways of Being Gay... Ann Herendeen's PHYLLIDA AND THE BROTHERHOOD OF PHILANDER

For today's post, I had planned to write about the character arc of the hero in Ann Herendeen's Phyllida and the Brotherhood of Philander. But when I checked out the most recent edition of Journal of Popular Romance Studies, I discovered that Herendeen had already beat me to it by writing an article that analyzes her own book. So instead, I'm going to write instead about another aspect of the book that I admire for feminist reasons: Phyllida's depiction of the multiplicity of ways that one can enact homosexuality.

Herendeen's lighthearted Regency tells the story of Andrew Carrington, heir to an earldom, who considers himself a "sodomite" but decides to marry in order to father an heir. To his surprise, after his marriage of convenience to Gothic novel writer Phyllida Lewis he discovers that bedding his wife has more than its share of charms. But this isn't a "bad man gone straight" story; Andrew doesn't give up his sexual interest in men when he realizes his growing attraction to, and love for, his wife. In fact, Andrew becomes sexually and emotionally involved with another man after his marriage, a man for whom he comes to care as deeply as he does for Phyllida. He has discovered "a new kind of love, in the strangest place" with Phyllida, but he won't give his old love up in exchange for the new  (48). 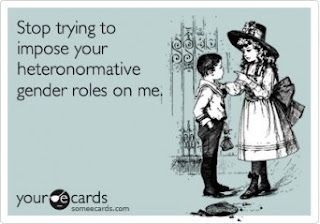 And Phyllida does not ask him to. She agrees to the marriage knowing that Andrew, like the man who introduced them, her neighbor and his friend Sir Frederick Verney, prefers the sexual company of men. She also knows Andrew's reasons for marrying,  that sex with him is part of the agreement. But the chance to better her mother and sisters' lives through canny negotiation of the marriage, as well as her own attraction to Andrew ("when he smiled, he looked like the fascinating villains in her books, whom she always ended up falling in love with, try though she might to make them wicked beyond redemption")  makes it worth her while (23). She's more than willing to allow Andrew to explore his own sexual proclivities, and even discovers the added benefit that watching her husband with another man is almost as exciting as being with him herself. 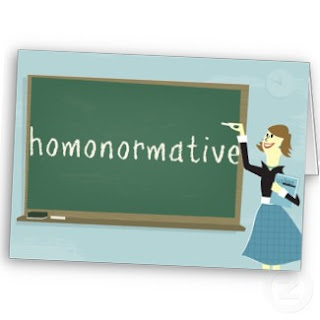 Thus the male/female coupling privileged in most romance—Andrew and Phyllida—is transformed into something far from normative—Phyllida and Andrew/Andrew and Matthew. Their relationship does not only challenge heteronormativity (the belief that the only normal sexual relationship is one between a man and a woman), but homonormativity (the adoption of key components of heteronormative belief, such as binary gender norms and monogamous romantic relationships, by LBGTQ individuals and communities*).

Phyllida and Andrew/Andrew and Matthew are not the only challenge to homonormativity in the novel. The founders of "The Brotherhood of Philander," a club for gentlemen sodomites to which Andrew belongs, are part of another tripartite relationship. In this case, however, it was the wife, Lady Isabella Isham, originally the daughter of a tradesman, who "purchased" her man,  Lord Isham. The third partner in their relationship, Lord Rupert Archbold, is the linchpin in their relationship, as Lady Isham explains to Phyllida: Marc—Isham that is—and I would roll the dice many an evening. Winner to enjoy the favors of our mutual friend, Rupert. Loser to wait his turn, or hers, although I tried very hard not to lose" (362).

Andrew's other friends, all members of the Brotherhood, construct their sexual relationships in still different ways. Sir Frederick Verney has relationships with different partners at different times (when Andrew asks him if he has a "friend," Verney replies "Not the marrying kind.... Not even with men." [21]). The Honorable Sylvester Monkton, a dandy of the highest order, asserts the same: "The day I take on a partner until death does us part, man or woman, is the day you can lock me up in Bedlam" (513). Sir David Pierce and Mr. George Witherspoon begin the novel as a monogamous couple, devoted to each other for years. Their partnership turns into a trio, however, as David becomes attracted to George's sister, the rather masculine Agatha, and she to him. We even get glimpses of traditional heterosexual relationships: Lord Isham's son, though he has great affection for his father, has a wife and children; Charlotte Swain, a friend of Phyllida's, longs after the very male, very beautiful Alex Bellingham.

As Andrew tells Phyllida after the two are reconciled and admit their love in one ending in a book that has several, "But I do not have to be a gentleman in this bed, just as you do not have to be a lady. So long as we treat each other with kindness, that is all that is required" (481). Protesting the unkindness of heteronormativity and its insistence that there is only one correct way to love others, Herendeen's novel is its own gift of kindness, a gift that blesses multiple ways of loving and being loved. 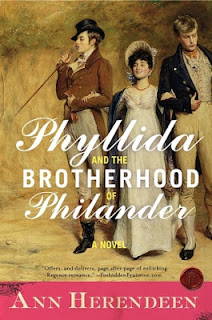 
Next time on RNFF: Rape in the romance novel
Posted by Jackie C. Horne at 9:00 AM