Authors and Narrative Deception in Romance

During my teen years, I became fascinated not only by category romance and the burgeoning new field of young adult lit, but also by the far older genre of the mystery novel. Like myriad other twentieth-century mystery fans, I devoured the works of Agatha Christie, learning the conventions of the genre by following the adventures of her two most famous detectives, Hercule Poirot and Miss Marple. Yet even when I had blown through all of the Poirot and Marple books, there were still other delights in store: the playful romantic duo of Tommy and Tuppence, the horror of the one-by-one murders of And Then There Were None, the twists of the the stage play The Mousetrap.

The Christie novel that had the most influence on me as a reader, though, was none of these, but instead one in which she used the very conventions of the genre to hide the identity of the killer. Mystery's rules teach us to expect, nay, to rely on the fact, that the amateur detectives investigating a crime, the ones through whose eyes we witness the unraveling of the mystery, don't keep secrets from us. And they are never, ever involved in committing the actual crime itself. When an author breaks this convention—when one of the focalizing characters doesn't reveal all he or she knows, or, even more shockingly, turns out to be the very culprit for whom the other sleuths are searching—a reader can often feel shocked, even betrayed. Or she can learn from it, learn to take pleasure in the way an author has used the very rules the reader has internalized to pull the wool over her eyes. 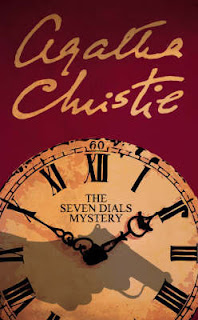 (Christie spoiler alert ahead) Christie deploys a completely unreliable narrator in two of her books, The Murder of Roger Ackroyd and Endless Night, a technique slightly different from the one of which I am writing. With an unreliable narrator, a reader understands by book's end that the narrator character has deliberately set out to deceive the audience to whom s/he is writing/speaking. But in Christie's The Seven Dials Mystery, the trickery seems to rest more in the hands of the author than in the culprit. The murderer is only one of several characters into whose minds readers are allowed; by grouping the criminal with the innocents not only through plot, but through narrative technique, Christie isn't holding out a challenge to readers to recognize the unreliability of one narrator. Rather, she is actively manipulating our expectations in order to hide the villain from our view.

Though not a commonplace in the mystery, authorial narrative deception occurs often enough that an avid mystery reader will not be taken completely by surprise to discover it popping up every now and then in a year's worth of reading. But such deception seems far more rare in the genre of the romance. Part of romance's appeal is its direct access to the ideas, emotions, and above all, the secrets of its hero and heroine, its promise that what the hero and heroine know, the reader knows, too. To read a romance which, in spite of granting us direct access to minds of both its hero and heroine, holds some important piece of information back, or which, through its conventions, leads us to expect one type of ending, while moving toward another, is a bit of a shock. 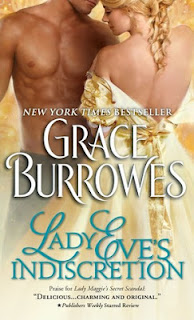 Two of my recent romance reads—Grace Burrowes' Lady Eve's Indiscretion (2012) and Carla Kelly's Libby's London Merchant (1991)—each gave me such a "shock." (possible spoilers ahead). In Lady Eve, the hero, Lucas Denning, knows a secret about the Evie Windham's past. Intriguingly, the secret is one that the reader is let in on fairly early in the novel, so the purpose of having Lucas not reveal his knowledge of it is not to keep it hidden from the reader. Why, then, when we are admitted to Lucas' other feelings about, and knowledge of, Evie, is this one piece of information kept secret? After rereading the passage when Lucas finally reveals to Evie that he knows, I came up with several possible reasons. But I'd like to hear other readers' thoughts on this first, before giving my own.

Carla Kelly's "deception" in Libby's London Merchant has more to do with an author's playing on the reader's expectation of romance's narrative conventions than with a character keeping secrets from the reader. Or at least playing with the narrative conventions in 2013. Since Libby was written in 1991, I wondered if my surprise at the book's ending was due to a deliberate attempt by Kelly to play with narrative conventions, or rather due to a shift in narrative romance conventions between the early 1990s and the early 2010's. Again, I don't want to give the surprise away, but for anyone who has read Kelly's book, I'd love to hear your opinion. 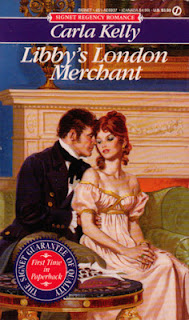 In Libby's London Merchant, I guessed the "trick" before it was revealed, and so I found Kelly's manipulation pleasing. But in Lady Eve's Indiscretion, I was completely surprised, and thus found myself feeling a bit cranky at being manipulated.

Can you think of other romance novels that do not just play with genre conventions and/or reader expectations, but do so in order to trick or deceive the reader? Do such books make you feel as if you as a reader have been betrayed? Or do such deceptions give you pleasure in experiencing the unexpected? If you were able to "get" the trick before it was revealed, do you feel more positively about the deception? If the author completely succeeded in surprising (or making a fool of) you, do you find yourself reacting negatively? Or does this, too, give you pleasure?

(if I can steal the third volume away from my daughter long enough to finish reading it between now and Tuesday...)