Earlier this week, an RNFF reader wrote to me off-blog with a publishing-related question. This reader is interested in writing a romance novel, and had been given the advice to read books from a particular line or publisher to get a good sense of what her targeted publisher is looking for in order to tailor her writing to its needs. As she intends to write as a feminist, she wondered if I could recommend specific romance publishers who are particularly welcoming of romances with feminist themes or beliefs.

I've been focused on individual books, rather than at particular publishers, so I'm not sure I can give this reader a reliable answer. The question did make me wonder, though, if the search for a welcoming home for feminist love stories might be similar to the search for an appropriate graduate school program, something that I went about without really knowing what it was important to be looking for. When I was in the midst of applying to Ph.D. programs in English, I initially focused on schools with the most prestigious programs, regardless of my particular areas of interest (children's literature, Victorian literature, and women's studies). Only after I'd been accepted, and had my initial welcoming interview with the English professor charged that year with creating a new incoming graduate class, did I realize that such an approach might have been shortsighted. My university's English department had a strong reputation, but one build primarily on the reputation of its Americanists I discovered, alas, not a field in which I had any interest. And when I asked if any of the professors had an interest in children's literature, he cheerfully replied, "Oh, you'll have to teach us about that!" Only later, after speaking with fellow students who had approached the application process with a bit more information than I had did I realize that targeting specific professors whose research interests would be compatible with your own, not just universities with the best overall reputations, should have been a key part of my search.

Luckily for me, my university also had a reputation for iconoclasm, for welcoming scholars with unique or unusual research areas. And it also had one of the foremost feminist scholars of eighteenth-century British literature, a scholar welcoming enough to serve as my mentor despite my preference for the Victorians rather than the Georgians. At a different university, though, my lack of knowledge about the interests of the professors might have led to much more gnashing of teeth and pulling of hair, perhaps even to dropping out of the program altogether. 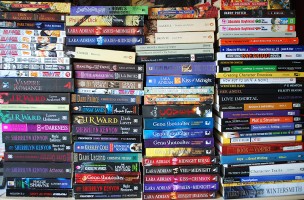 This experience makes me wonder if the search for a feminist-friendly romance publisher might similarly lie less in targeting a particular house, and more in identifying particular editors who embrace and sympathize with feminist goals and ideas. Editors, of course, have far less freedom to pursue manuscripts they like than professors do to support scholars whose work they believe has potential, yet I'm guessing that like professors, individual editors have decided preferences not only of subgenre, writing style, and types of heroes and heroines, but also in the underlying messages the stories that speak to them convey. Some might assume feminists have an ax to grind, or are anti-male, or have some other outdated view of what feminism is all about; others may simply take feminism as a given.

This, of course, is just a hunch on my part, not something I've researched empirically. So, I'm turning to the collective wisdom of this blog's followers. RNFF readers, what is your take on this reader's question? Are there particular publishers, or particular lines at particular publishers, that seem more welcoming of feminist-friendly romances than others? Published authors out there, has the "f-word" come up in your conversations with specific editors or agents, and if so, was it frowned upon as an evil to avoid? Or smiled at as a welcome friend? Are there editors who are actively looking for feminist romance?


Next time on RNFF:
Mothers and Lovers in
Molly O'Keefe's Can't Hurry Love

Email ThisBlogThis!Share to TwitterShare to FacebookShare to Pinterest
Labels: publishers