Romancing the $s and £s

To date, I've not reviewed any category romances on RNFF, having made the assumption that the most mass-produced of titles in a decidedly mass-market genre would hardly be likely to hold feminism in high regard. Literary scholar Laura Vivanco, however, suggests that such an out-of-hand dismissal on my part may be premature. In her article "Feminism and Early Twenty-First Century Harlequin Mills & Boon Romances,"* Vivanco reports on the results of her reading of 120 category romances published between 2000 and mid-2007. Sixty of Vivanco's books came from Harlequin/Mills & Boon's "Modern"/"Presents" line, sixty from the "Romance"/"Tender" line.

Though she discovered a "small number" of books which "appeared to be antifeminist in that they either explicitly critiqued moves towards equality or they end with the hero exerting significant control over the heroine in some way," and an unspecified number in which "little evidence of either a positive or negative engagement with feminism" appeared, 26 of her 120 books either "explicitly express positive attitudes towards feminists and feminism" or directly engage with feminist issues or ideas (1062, 1063). If we extrapolate from Vivanco's sample, her findings suggest that a little over 20 percent of Harlequin/Mills & Boon category romances portray feminism in a positive light. A distressingly low percentage in our purportedly "post-feminist" age, yet a percentage greater than conventional wisdom has previously assumed.

Just how deeply do these romances embrace feminism? I sometimes find myself frustrated after picking up a children's or YA book that a reviewer or expert has touted as featuring positive female role models, only to discover after reading that its feminism is no more than surface-deep, or that my definition of feminism seems quite different from that of the recommender. Often I find such books explicitly declare their alliance with feminist principles but then proceed to undermine said principles on the level of implicit, rather than explicit, ideology. I'm eager to take a look at some of the books Vivanco discusses, to see whether they are wholehearted in their embrace of feminism, or whether they present conflicting attitudes toward feminism. (I know that Laura Vivanco is a frequent reader of RNFF, and hope she will chime in here on this issue).

Until I can round up and read a few of these books, though, I thought I'd share another issue Vivanco's article raised for me: the issue of women's relationship to money. Vivanco notes that many of the heroines in the Modern line "struggle not to be seen as 'gold-diggers,'" a struggle she suggests "may be read as attempting to redefine the institution of marriage so that it is no longer a sexual/financial transaction but a relationship built around emotional trust and intimacy" (1070). This struck me as an surprising argument, as I'm guessing few unmarried young people today regard marriage as a financial transaction at all, never mind feel a need to "redefine" it as something distinct from financial matters. Why then should "emotional trust and intimacy" be placed in opposition to money?

The quotes Vivanco includes to support her argument, and the language in which she couches them, made me wonder if these books weren't just attempting to redefine marriage as no longer a financial transaction, but also, simultaneously, setting up a binary opposition between money and love. In this binary, love in placed in the superior position, money in the inferior, the opposite message most Western men are socialized to believe. Such a binary construction unconsciously suggests to women that money is not, and should not, be important, at least not to them.

Vivanco argues that in order for Stasia, the heroine of Sarah Morgan's Public Wife, Private Mistress,"to prove her point that marriage is not an exchange of sex for financial security, when she left him [her husband]," Stasia says:

"I left everything because there was nothing I needed." She met his gaze full on, the message clear in her eyes. I was never interested in your money and I can't believe you don't know that. (1070)

thinks of her work as something which benefits others and gives her more than merely financial rewards: "Life isn't always about money.... There are other things that matter, like independence and self-belief. I like my work. I need to know that I'm good at something. Making a contribution that matters." (1072)

While a belief that money is the end-all and be-all of life is one most feminists would find troubling, the completely opposite view—that money is "merely" a "reward" given for acting in ways that "benefit others," rather than something women earn so they can support themselves —seems equally problematic. Life isn't always about money, but it is often about money, especially life in a marriage. As myriad studies, including this 2012 study from  the  American Institute of CPAs,  have shown, the most common reason married or co-habitating couples fight is over finances. If romances function to persuade women that money should not be of much concern to them, then how will they be able to function as equal partners in a relationship in which many, many decisions about money occur? 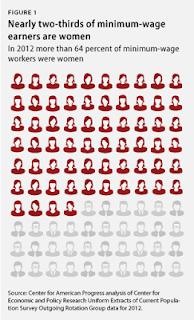 The lines from Morgan's novel made me begin to wonder—have I ever read a romance, either category or single-title, in which a woman is proud of the money she earns? In which earning money through work is seen as a positive, empowering act for a heroine? A romance in which a heroine earns more than her potential love interest? A romance in which a woman does not want to give up her job after finding her true love, not because giving it up with be a sacrifice of personal fulfillment, but because earning her own money makes it easier for her to feel like an equal partner in a relationship with a fellow wage-earner?

I could not think of a single one. Am I just being forgetful? Or do some come to your mind?