Before I discovered romance novels as an early adolescent, the genre that occupied most of my reading hours was the mystery. It was rare to find me without a yellow-spined Nancy Drew, or, later, a Trixie Belden, in hand, pages turning almost as fast as my eye could scan. In the days before amazon, Barnes & Noble, or Waldenbooks, I haunted the book aisle of the local Child World toy store, eagerly awaiting the arrival of the latest installment in my favorite series. Even after I became a romance reader, I still read a lot of mysteries (although Nancy's relationship with bland beau Ned Nickerson hardly supplied the romantic punch of a Harlequin). My go-to author during those teen years, as she was for so many other millions of mystery fans, was Agatha Christie. My favorite of her detectives was not the intellectual Hercule Poirot, nor even the small-town amateur sleuth Miss Marple, but, perhaps unsurprisingly, the friends who turn into lovers and later marriage partners Tommy and Tuppence Beresford. My paperback copies of The Secret Adversary (1922), Partners in Crime (1922) and N or M? (1941) all had pages leaking out of their bindings, so often had I cracked them open to read and reread about the intrepid, impulsive Tuppence and the solid, loyal Tommy, bright young things whose complimenting personalities made them not only the perfect detective pair, but a winning romantic couple. 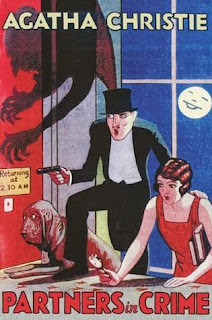 It wasn't until college, though, when I discovered the works of Dorothy Sayers, that I truly found a writer who was as interested in the workings of egalitarian romantic relationships as she was in teasing out the intricacies of a tangled mystery plot. The difficult courtship between Lord Peter Wimsey, English aristocratic gentleman detective, and mystery writer Harriet Vane, unfolds over the course of three novels. In 1931's Strong Poison, Harriet is accused of murder, and Peter discovers the true culprit; in 1932's Have His Carcase, the two work together to discover a murder after Harriet stumbles across a dead body while on holiday; and in 1935's Gaudy Night, Harriet calls Peter in to help her find the culprit behind a rash of poison pen notes and other offensive pranks played against the dons and scholars of her alma mater, the invented Shrewsbury College of the very real Oxford University.

Both the setting and the crime provide fitting counterpoint to the unfolding of Harriet and Peter's relationship. Oxford had only recently admitted women to membership in the university; the women's colleges (dorms) Lady Mary Hall and Somerville had opened in 1879, but even as late as 1906, male dons could exclude women from their classrooms if they wished. Women students pushed to be allowed to take the same examinations as their male counterparts, a request that led to much controversy during the opening decades of the century. Even those who passed their exams, such as Dorothy Sayers, who took first-class honors in 1915, were not granted degrees until 1920, when at last the University deigned to give women students full status.

The quest for gender equality serves as the backdrop against which the novel's mystery—who is the perpetrator of the smear campaign being conducted against the unmarried dons and the most successful female students of Shrewsbury—plays out. Is it a man, disgruntled by the unprecedented inroads female scholars have made in the previously male-only preserve of Oxford? Is is a failed student, out for revenge against the women dons? Or is it, more frighteningly, the very specter misogynistic nay-sayers have been waving for years to warn against the dangers of educating women—the specter of the repressed virgin intellectual spinster, a female scholar whose overtaxed brain and sexually-frustrated body had driven her mad, turning her viciously against her own kind? Even though any intelligent female would laugh to scorn such an obviously sexist straw woman, Sayers seems to suggest, its all-too-frequent invocation cannot but echo, sending invidious tendrils of doubt creeping even into the minds of the most rational.

The issue of gender equality also lies at the heart of Harriet and Peter's potential relationship, a relationship that began under the most unequal of circumstances. Harriet's motive for murdering her former lover, stems not from jealousy or betrayal, but because he made a fool of her.  Insisting that she live openly with him because he did not believe in marriage, Philip Boyes only told her a year later that in fact her acquiescence was only a test of how abject her devotion was. Harriet immediately broke up with him. "Were you friends?" Peter asks her when they first meet. "No" she says, "the word [breaking] out with a kind of repressed savagery that startled him" (SP 36). Her former lover didn't want a friend, especially a female one, and Harriet despises herself for not seeing his self-absorption sooner.

At first, Peter seems little better than Harriet's callow former lover. So overwhelmed by his unexpected reaction to her during her first trial (which results in a hung jury), he can't stop himself from proposing the first time they meet—while she is still in gaol. He tells her:

I was absolutely stunned that first day in court, and I rushed off to my mater, who's an absolute dear, and the kind of person who really understands things, and I said, 'Look here! here's the absolute one and only woman, and she's being put through a simply ghastly awful business and for God's sake come and hold my hand!' You simply don't know how foul it is. (SP 38)

Even for Lord Peter, renowned for hiding his sensitivity and intelligence behind a self-mockingly loquacious manner, the outburst is ridiculously self-absorbed. But the novel ends a bit more promisingly: rather than hang about after Harriet's acquittal, Peter drives off. As Harriet's friend tells her, "He's not going to do the King Cophetua stunt, and I take my hat off to him. If you want him, you'll have to send for him" (SP 192). King Cophetua, the king in the story of the King and the Beggar Maid, feels no sexual stirring for any woman until he spies a beggar maid outside his window. Rushing outside, he scatters coins to the beggars; when the girl draws near, he tells her that she must be his wife. Harriet's friend thus suggests that Peter won't use Harriet's gratitude toward him for saving her life to guilt her into marrying him. Harriet insists she won't be sending for Peter, despite her friend's assurances that she will.

Throughout the middle book, Have His Carcase, Harriet's frustrations at being beholden to Peter, being cast in the role of beggar girl to his beneficent king, continue to plague her, and the two fall into bouts of snapping and bickering worthy of any romance novel. But still, at novel's end, they remain apart.

At the start of Gaudy Night, though, when Harriet revisits Shrewsbury for the first time since graduating, and impertinent people cannot help but ask her about the famous aristocratic detective, she finds herself taken aback by how "the mere sound of his name still had the power to provoke such explosions in herself—that she could so passionately resent, at one and the same time, either praise or blame of him on other people's lips" (GN 57). And when she asks him for his help with the mystery at Shrewsbury, and he comes to offer his aid in person, she sees him through the eyes of others—his nephew, now at Oxford himself; a college porter who once served in Wimsey's army brigade (he served as a Major in WWI); the Balloil dons who taught him while he was an undergraduate; former college friends. Their assumptions about Peter, as well as her own newly awakened eyes, allow Harriet to realize that there is far more to Peter than her initial embittered perceptions allowed her to see.

The question for Harriet, then, becomes not "do I love him," but rather, is "a marriage of two independent and equally irritable intelligences... reckless to the point of insanity" (376)? Can a romantic relationship exist without one party being subordinated to the other, subsumed by the other? Though the means by which Harriet and Peter explore this question—sonnets, chess sets, punting on the river, classical concert-going, and above all, arguments both abstract and personal—are grounded in the fierce intellectualism of 1935's Oxford elite, the answer this early 20th century novel provides proves just as feminist, and just as romantically satisfying, as that found in any 21st century romance.

Who are your favorite romantic mystery-solving couples? 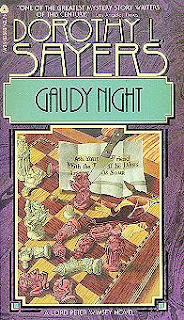