Yesterday in the United States we celebrated Labor Day, a holiday dedicated to the social and economic achievements of the American worker. I've had my share of jobs over the course of my life, both ordinary—babysitter; counterperson at McDonalds; college professor—and unusual—one aborted day as a telemarketer; nearly a decade in various positions in children's book publishing; a long but fascinating summer working in a factory that manufactured tampons. But these all seem rather mundane after reading about a career created by the hero of a romance novel I read recently: drag queen. Especially because said hero is decidedly straight.

With the exception of a third-person prologue and epilogue from the hero's point of view, L. H. Cosway's Painted Faces is narrated in the first-person by twenty-five-year-old Freda, who cobbles together a living working part-time in a Dublin charity shop and baking cupcakes every morning for a local bakery. Fred's got a wise-ass mouth, but as far as romantic experience goes, her bark is worse than her bite. She and her first boyfriend parted after "we basically figured out that we just couldn't really stand each other"; her only other boyfriend "turned out to be quite the psycho kettle of fish," stalking her for a whole year after she broke up with him (21). Compared with her flatmate Nora, Fred's not a looker; her rounded figure and comfortable style of dress mean that Nora's the one the men turn to first whenever they hit the Dublin bar scene, a situation which suits Fred just fine, thank you very much.

But when a new man moves into the apartment next door, it's Fred, not Nora, who catches his eye. Telling her she can call him "Vivica" after she introduces herself as "Fred," and his quick Marilyn Monroe gesture and voice when she responds "Cool, if we become friends can I call you Viv?" seem to suggest he's gay. But the way he openly leers at her rain-soaked top ("Did I miss the wet t-shirt competition, again?") points to the opposite.

In fact, though Nicholas has come to Dublin to work in a friend's new gay club as a drag queen, his sexual tastes turn entirely toward women. And curvy, irreverent, snarky Freda is just the type of woman he prefers. Given her past experience, though, Fred can't help but be taken aback by Nicholas's directness ("You're very pretty, Fred," he says, matter of factly. Then he brings his face closer and traces his lips along my ear. "I'd really like to fuck you." [30]), and refuses his sexual advances. But when Nicholas asks Fred to work for him as his dresser, helping him get ready before his shows, and their friendship develops, Fred increasingly grows to feel that Nicholas is "plunging my black and white world into a vibrant technicolor rainbow" (52).

"I'm not trying to fool people into believing I'm an actual woman.... I think being somewhere in between male and female is just as intriguing," Nicholas tells Fred when she questions him about his cross-dressing (110). And it's this mixture of male and female, or, perhaps, of over-the-top campy gayness and aggressive masculinity, that captures Fred's imagination. She dreams about "Nicholas wearing boxer shorts, high heels and a lacy black bra over his muscular chest. He's wearing make-up too, but not much; a little mascara and some dark lipstick. For some reason I am incredibly turned on by the sight. He's half boy, half girl. All gorgeous" (99). But Fred remains cautious, not willing to risk this wonderful friendship, afraid that for her, sex and love cannot be separated, as they can for Nicholas. For Nicholas may be direct about sex, but expressing emotional intimacy is a far different story.

Cosway's novel acknowledges that Nicholas's urge to cross-dress stems from childhood loss and trauma. But like Anna Cowan's Untamed, Painted Faces never indulges in the "love will fix you" trope, never suggests that the feminine "painted face" that Nicholas puts on is something that needs to be set aside if he is to be psychologically whole. A fitting acceptance for a book dedicated to "all the men who are women and the women who are men, the men who are men and the women who are women. And those of you who are a little bit of both. You colour my world" (3). 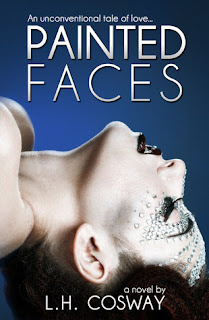