Back in May, in response to a post about whether a romance featuring the trope of the evil woman could ever be feminist, commenter mepamelia suggested we try Jacqueline Carey's fantasy novel, Kushiel's Dart. It's taken a while for Carey's novel to make it to the top of my TBR pile (reading primarily romance for the past year, books that I can usually plough through in a day or less, made me cautious about devoting an entire week to a 700-page epic fantasy), but once I picked it up, I found it nearly impossible to put down. Kushiel's Dart is a good book to think with, a book that asks its readers to interrogate their assumptions not just about gender, but about religion, power, sexuality, and love.

Having taught a class on fantasy for children and young adults for nearly a decade, I've come to appreciate books which imagine fantasy worlds far different from our own, especially those built upon models that point out the problematic aspects inherent in ours. The world Carey creates in Kushiel's Dart is an alternate version of Europe in the early Middle Ages, after the fall of the Roman Empire. But instead practicing Christianity, the people of Terre d'Ange revere Blessed Elua, an angel formed when the "bitter salt tears of the Magdelene fell upon soil ensanguined and moist with the shed blood of the Messiah" (24). Scorned by God, rejected both by the Roman Empire and by the Yeshuites, Elua wandered the earth singing, flowers blooming in his wake. Tales of his wandering reached Heaven; after the King of Persis imprisoned Elua, eight of the angelic hierarchy descended to earth, flouting the One God's will to come to his aid. Naamah, "eldest sister," offered her body to the King in exchange for Elua's freedom; later, she lay with strangers in the market for coin to sustain Elua and his followers. Terre d'Angelines do not find her actions abhorrent, but worthy of reverence. After years of wandering, Elua and his followers at last found welcome in the unnamed land that becomes Terre d'Ange, where the people accepted his one Precept: love as thou wilt. 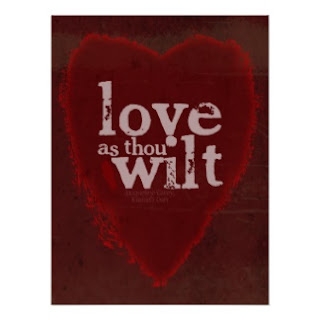 The society of Terre d'Ange, then, is one with a far different attitude toward sex and sexuality than a Christian-based one. In Terre d'Ange, the pleasures of sexual love are valued, rather than feared or shunned as sinful. Bisexual, homosexual, and heterosexual encounters are all embraced (although each person is allowed to choose his or her own partner(s) and sexual preferences), as are sexual encounters based on the pleasure of pain. Adepts of the angel Namaah prostitute themselves in sacred service. Rape, a heresy against the teaching of Elua, is considered an abhorrent crime.

But if Terre d'Ange is a sexually-liberal society, it is hardly a paradise; even as it accepts multiple sexualities, it remains as mired in the same political power struggles that troubled not only real medieval Europe, but the kingdoms in the majority of 20th century high fantasies, too. And while it may be a crime to rape, using an enemy's sexual desires against him to gain secrets and reveal lies is a far from uncommon practice. At least in the House of Anafiel Delaunay, where our protagonist, Phèdre, has been raised since the age of ten.

Sold first by her mother into servitude to one of the Houses of the Night Court, the thirteen Houses where adepts of Namaah offer their courtesan services, Phèdre's indenture is later purchased by Delaunay, a potentate of the royal court. For Phèdre bears Kushiel's Dart, a red mote in her eye, the rare sign of an anguisette, or lover of sexual pain. Kushiel, one of the angels that fled Heaven to follow Elua, was originally an angel of punishment, sent by the One God to torment sinners and make them repent. But Kushiel believed that chastisement could be an act of love, could offer pleasure as well as pain, a belief the One God did not tolerate, but Elua did. Delaunay knows that the rarity of Phèdre's inborn proclivities, as well as the prevalence of sadism among many of those in power, will make her the perfect spy, and trains her up accordingly. 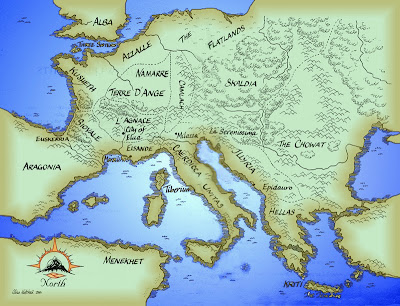 The book unfolds in three sections; one, portraying Phèdre's early years as a courtesan/spy in Elua City; a second, depicting her months as a captive of the uncivilized western tribes of the Skaldia, who threaten Terre d'Ange with invasion; and a third, which recounts her imperiled journey to Alba (England) to negotiate an alliance on behalf of Terre d'Ange's young, beleaguered, unmarried queen. Intelligent, pragmatic, impeccably educated in not only politics, history, and languages, but in all the arts of pleasure, Phèdre proves a compelling high fantasy heroine as she struggles to see herself not as Kushiel's victim, but as his weapon. And a compelling romance heroine, too, as two very different men come to care for her, and she for them, over the course of her travels.

There's so much more to say about this fascinating book, so many other questions to ask: How is an anguisette different from others who enjoy sexual submission and pain? Are Phèdre's self-sacrificing actions truly heroic, if the pain she endures on behalf of others is a pleasure to her? Can a partner who doesn't share Phèdre's sexual proclivities ever suit her? What does committed love look like, in a society where infidelity is not a recognized concept? And, the question that teases at novel's end: once you've tasted the thrill of the political power game, can you ever be satisfied with a quiet life in the countryside, far from all court intrigue, even if you've the one you love beside you?

No time to answer; I have to run to the library to pick up the next book in the series...

What other high fantasy novels feature so many, and so many powerful, key women as players (spy Phèdre; Queen Ysandre; and Machiavellian machinator Melisande Sharizai)? Do these fantasies also include compelling romance?

Illustration credits
Love as Thou Wilt: Zazzle.com
Map of the world of Kushiel's Dart: Woodge.com 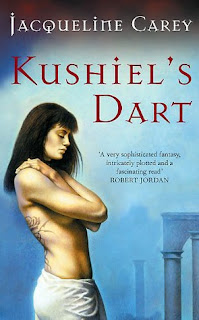