The Appeal of the Obsessive Alpha?

In a post earlier this week on the Romance University blog, Avon romance editor Lucia Macro listed four items on her "personal wish list" for historical romance submissions, including this at #2:

A word about those heroes: lately, contemporary romance heroes have been super-sexy, self-assured, and single minded in their pursuit of the heroine. And while she can give as good as she gets, these men know who they want and they stop at nothing to get her. And readers are responding—in droves. It might be worthwhile to take a page from the contemporaries and give us heroes to swoon over.

Editors, and the publishers for whom they work, surely noticed that the top slots on the bestseller lists last year, both in e-book and in print, were E. L. James' 50 Shades books. Said books' hero, Christian Grey, is "super-sexy, self-assured, and single-minded" in his pursuit of innocent Ana; ergo, rename him and put him in other romance sub-genres, and we'll get equally-stratospheric sales, publishing marketers and execs can be forgiven for believing. It's always easier to sell something that you can compare to something else that's already popular; the success of Sylvia Day's far better-written Crossfire trilogy, with its equally dominant if slightly less kinky hero, Gideon Cross, proves the truth behind this marketing truism. Readers may have responded in droves to the 50 Shades phenomenon, but will they keep responding to Christian Grey clones? 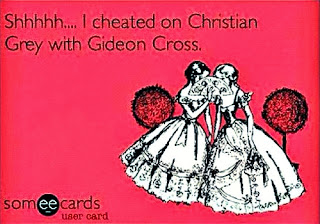 A doctor friend of mine reminded me that psychology asserts that all people, whether female or male, have an unconscious desire to be protected, to be taken care of, as we were when we were infants. Men are often shamed into denying and ignoring such unconscious needs, for fear of being labeled gay, but women are given the option of indulging in them—if they displace the desire for the original mother figure onto an adult male romantic partner. Books featuring powerful billionaires obsessed with the one woman of their dreams are just the most recent example of such culturally-sanctioned avenues for women to fantasize about a return to an all-consuming, all-satisfying relationship with one's early primary caretaker.

Though I'm sure that marketers would prefer it otherwise, the caretaking fantasy is not the only fantasy in which women indulge. And I for one am not willing to give up the myriad delights of my diverse romantic desires to purchase the same fantasy over and over again. I swoon over many different types of heroes, not only (or in the case of Christian Grey, not at all) over the hyper-obsessive alpha. I may have checked the Crossfire books out of the library, but I'll be placing putting my book-buying dollars in baskets far more diverse than those containing Christian Grey, Gideon Cross, and their look-alike progeny.


How do you, readers, fight against marketing forces that strive to homogenize romance? Or do you enjoy riding the wave of a trend, for as long as it lasts?