Interrogating Self-Sacrifice: Julie Berry's ALL THE TRUTH THAT'S IN ME

It is one of my most visceral memories, leaving the movie theater that evening in 1996, anger, disgust, and fear roiling deep in my gut. I'd gone alone that night, eager to take advantage of my spouse's immersion in a graduate school project to see a film in which I knew he would never be interested. But by the time the lights came up in that theater, I was cursing myself for not staying at home. Lars von Trier's Breaking the Waves—the story of a "simple" young wife, madly in love with her new husband, who agrees to said husband's demand to sleep with other men after he is paralyzed in an oil rig accident—is stunningly shot and amazingly acted. Such artistry makes the film's gender politics even more disturbing; the beauty of the film urges us to admire the sight of a husband growing stronger as his wife's sexual encounters grow more sordid, veering into sadistic abuse. Breaking the Waves asks viewers to regard the wife's ultimate sacrifice as Christ-like, holy, transcendent. Instead, it made me want to vomit. I was literally shaking as I left the theater, afraid to be in company with my fellow theatergoers, worried that unlike me, some of them might actually have found the film's model of love-inspired female self-sacrifice not sickening, but admirable.

You will understand my misgivings, then, when I heard author Julie Berry describe the plot of her new young adult novel at a book signing last month. All The Truth That's In Me tells the story of eighteen-year-old Judith, who goes missing from her colonial-era town four years before the start of the novel, only to return two years later, physically mutilated, her tongue partially cut out. Shunned by the townspeople and her own family, overlooked by the neighbor she's loved for as long as she can remember, Judith lives the life of an outcast, her silence mistaken for stupidity, or possibly even damnation. But when invaders threaten both her town and her beloved Lucas, their only hope lies in the man who abducted Judith, a man whose identity she has kept secret for two long years: "So there is a way. If someone can find and purchase it. If someone's devotion and courage are sufficient to die for it" (41). Will Judith sacrifice herself to save her town? Her beloved?

Berry is a former student of mine, from when I taught at the Center for the Study of Children's Literature at Simmons College, and we've stayed in touch since she left Simmons to attend Vermont College's MFA in writing for Children and Young Adults Program. And her book has been receiving a lot of positive buzz from bloggers and reviewers. So I knew I would have to read it. Still, I put the copy I'd purchased aside for a few days, days which turned into several weeks, as I tried to overcome my trepidation. Finally, this weekend, I forced myself to crack open the book's spine.

And found myself captivated. 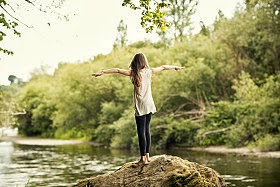 For the self-sacrifice that the flap copy and the buzz tout do not prove to be the culmination of the book, as they are in von Trier's film; Judith's return to her abductor happens fairly early in the story. Nor are we are invited to rejoice in Judith's act of self-sacrifice, an act that has the potential to be an act of self-erasure. Instead, readers follow Judith in the aftermath of her choice, watching as she begins the arduous process of reclaiming her self. The obsession with Lucas that marked the book's opening section (the entire narrative is written in the second person, with Lucas as the addressee) gradually recedes, with scenes of Judith almost stalking Lucas slowly displaced by scenes of her interactions with her family, other townspeople, and most importantly, with herself. Learning to read, remembering how to sing, welcoming a new friendship, Judith recaptures her own own voice, long before she can bring herself to attempt to speak with her mutilated tongue: "I try to imagine my body asleep, with only the musical air rushing out and in. Again and again I sing, until the sound is limber, light, and pure. What is this thing inside me that can make such sound, after so long? How could I have let it be stilled?" (136).

A subplot about a murder serves as the focus of much of the final section of the book, the subplot's resolution the book's climax. This subplot contains interesting themes for a feminist to consider: what constitutes healthy sexual curiosity vs. unhealthy prurience; the injustice of men who would restrain and deny women's sexual desires; the fears women have of being negatively judged by association with the shunned; the powers of both female rivalry and female friendship. But for me, the novel's climatic moment came mid-book, when Lucas asks Judith the one question she's been dreading. To give him the answer he so desperately wants would be to relive the anguish of the man she still so deeply loves. But it would be a sacrifice of herself bought at far too dear a price:

Lucas. At your bidding I'd have fallen at your feet. I'd have lied for you, I'd have lied to please you, if I had the words to do it.
But I can't answer you this. Not even for you. In time the truth would make you hate me, if you don't already. But more than that, against all reason, I hold myself too dear. (145)

Would that all young girls learn to hold themselves as dear. And find partners, as does Judith, who will love them because they do. 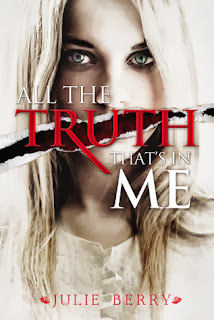 Julie Berry
All The Truth That's In Me
Viking, 2013

Email ThisBlogThis!Share to TwitterShare to FacebookShare to Pinterest
Labels: book review, self-sacrifice, YA