Is the Political Personal?

I've always been fascinated by the relationship between Republican strategist Mary Matalin and Democratic consultant James Carville. How could two people with such divergent political belief systems ever see beyond their obvious differences and fall in love? How, twenty years after marrying, can they maintain a respectful, loving relationship when their views about the way our government should function are so utterly different? I have a lot of friends with far more conservative political views than I do, but at the end of the evening, I can leave them and their (obviously misguided ;-) ) views behind; my political opinions and those of my spouse overlap enough that I can be sure we won't end up in a toothbrush duel over the merits of Obamacare or the efficacy of the TSA as we get ready for bed.

I've read several romances of late with protagonists on opposite ends of the political spectrum. In the most interesting, Karyn Langhorne's Unfinished Business (2007), Washington DC schoolteacher Erica Johnson and war hero U.S. Senator Mark Newman meet not cute, but antagonistic, when Erica stands up in the middle of a Senate Education subcommittee hearing to protest American involvement in Iraq: "If we weren't spending billions in Iraq, we wouldn't have to debate on cuts that take food from the mouths of our schoolchildren!" The senator, southern gentleman that he is, asks that the protester be treated respectfully—"This is still America... and dissent is not punished with manhandlin'." But Erica won't allow the Senator's good looks, charm, or arrogance to turn her protest into a photo op for himself, insisting on teaching her own civics lesson: that standing up for your beliefs has consequences, consequences that one must be willing to accept. Including being arrested.

Before she's hauled off to jail, Erica tosses a challenge to the irate upstaged senator: "Come to my school. Explain your policies—your war—to my kids. Erica Johnson's fourth-grade classroom. Any time you want. Door's open." Little does Erica expect the cocky, smirking senator to show up at her school, nor does she expect him to offer a challenge of his own: to accompany him on a week-long swing back through his (unnamed) home state while he campaigns during the reelection primary. But neither the white conservative southerner nor the black liberal northerner can seem to stand down in the face of the other's challenges.

Langhorne does a great job presenting the humanity behind the political stances. Both Mark and Erica come off as intelligent, well-informed political actors, though each initially draws on stereotypes and easy put-downs to insult the other's position and to bolster his or her own. Each chapter opens with an epigraph or slogan, sometimes from the liberal point of view ("Waging war to stop terrorism is like using gasoline to put out a fire"), sometimes from the conservative ("If we don't stand up for something, we'll fall for anything"), with neither side belittled nor denigrated. It's clear that both Erica and Mark enjoy matching wits with the other, enjoy being challenged to support their views in the face of doubt. And the physical attraction between them is obvious to everyone around them. 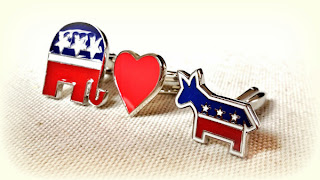 Although much of the narrative's energy comes from the knock-out verbal exchanges between "irritatingly granola flower-child" Erica and "conservative nut job" Mark, I expected that Mark would learn to moderate his views by visiting Erica's classroom, as would Erica after spending a week in fictional southern "Billingham." In order to make their relationship work, they'd have to meet somewhere in the middle, wouldn't they?

But instead of reconciling their politics, the narrative sidesteps the issue of Mark and Erica's differences by introducing a suspense plot that places both in physical danger. Once each's life is threatened, their political differences become far less meaningful, far less divisive. As Erica tells Mark's media advisor, who questions the viability of Erica and Mark's relationship:

"There's more criteria in a successful relationship than what political party you belong to, or what color you are. There's another whole list of characteristics and qualifications. Things like trust and loyalty, having passion for people. A passion for life. It doesn't matter how it's directed. It matters that you both have it, and that you both know that, when it's all said and done, you're willing to work together, to fight together, and to serve the common good together." 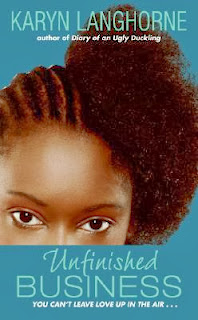 Initially, this felt like a cop-out to me: immersing Erica and Mark in danger simply to deflect attention from what really matters—the differences in their deeply-held values. But then I began to wonder. Do life-changing (life-imperiling) events make people hone in on the personal characteristics that underlie a person's values? Might it be a sign of a mature relationship when people can agree to disagree? Or could differences in politics sometimes be a reflection of different means to the same end, not always the sign of fundamental differences in deeply-held values?

It's a little difficult to say for sure in Unfinished Business. The novel ends with Mark and Erica agreeing to "try" to form a relationship, with an epilogue in the form of a newspaper wedding announcement describing them one year on. "I think they fight it out at home.... Then the senator comes in ready to work toward the best outcome. Marriage is all about compromise, and government is all about compromise. So it works for everyone," Mark's chief of staff is quoted as saying. But we don't hear much about any compromises: we don't know where they decided to live (in DC or in Billingham or both), whether Erica kept her teaching job, or whether she still publicly protests when Mark takes a stance with which she disagrees. The only sign of their compromise is their honeymoon in Baghdad, visiting servicemen and women: "they are both very committed to seeing our troops home safely." Have they compromised? Agreed to disagree? Decided never to talk politics? Readers are left wondering...

Have you read any romances with protagonists on opposite ends of the political spectrum? Do such romances tend to downplay political differences? Or do they show the two sides learning to compromise? Or do they argue that politics and the personal don't necessarily need to mix?