Searching for My Harlequin Past

As an early adolescent, I was a big reader of Harlequins. I remember hanging out in the local department store, in front of the serial romance bookshelves, poring over which titles sounded interesting enough to be worth the $1.25 I would have to shell out in order to take it home and read more than just the blurb. I remember shopping bag-fulls of the slim volumes cluttering up my closet, and later, after I became embarrassed by my early teen reading, being hauled out the door to be donated to a charity book sale or local Goodwill. Few of these books remained very long in my memory, far too similar in plot, characterization, and tone to stand out from any other.

There were two, though, that I still remember to this day, one with some fondness, the other with definite feelings of "yuck." I couldn't remember the titles or authors of either one, though, and so had a difficult time tracking either down when I rediscovered romance a few years ago (after leaving it far behind soon after graduating high school). But I was inspired by blogger Willaful's recent posts about rereading the romances of her own adolescence to try again to search.

You can easily find lists of all the books published by Harlequin in a certain year (on the romance wiki, and on Wikipedia), and I scanned both lists for the year 1979, thinking that year, the year I turned 14, the most likely one in which I'd find my titles. Could it be Victoria Wolf's Sweet Compulsion? Jane Donnolly's A Savage Sanctuary? Betty Neels' Sun and Candlelight? Some of the author's names sounded vaguely familiar, but since these lists do not contain book descriptions, it was pretty difficult to discover if any of these books were the one I remembered.

Then I hit upon the idea of doing an image search, rather than a straight web search. Maybe a picture would jog my memory more easily than a title alone? 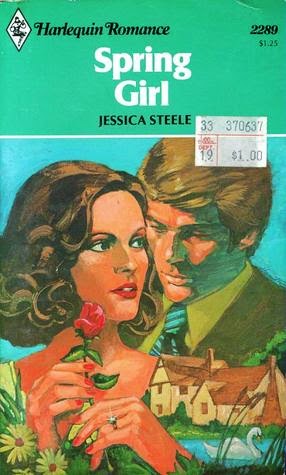 And then, voila! There it was. The woman on the cover caught my eye first, even though she didn't seem the least familiar, with her brunette hair and brown eyes, a rose held lightly between her fingers, an engagement ring winking on her left hand. But when my eyes moved to the right, I knew I had hit pay dirt. Even though the blond man's suit, with its lime green shirt and blue striped tie, hinted at warmth, his downturned eyes and strong facial bone structure suggested just the opposite—a Harlequin hero worthy of his hard name: Stone Harland. Yes, I had finally found it: Harlequin Romance #2289, Jessica Steele's Spring Girl, published in paperback in October of 1979.

I ordered a used copy online, eager to reread and discover, if I could, just what about this particular Harlequin had found me turning back to it and rereading it, over and over, during my 14th and 15th years. I remembered the basic plot—a young woman, annoyed by the persistent sexual attentions of a man she's been dating, sends him a letter implying that she wants to marry him, a letter she hopes will scare the cad away. A few days later, she finds on her doorstep the brother of the cad's fiancée, insisting that she pretend to be his betrothed, to persuade his sister, distraught and hospitalized after a car accident, that her own fiancé has not played her false. Thinking back on this now, such an act seems pretty gutsy for a Harlequin heroine—using wit and guile to get the better of a man, rather than simply accepting unwanted attentions. Might this have been part of the book's appeal?

I also have strong memories of two particular scenes from the book, scenes that reflect less well on the novel's sexual politics. The first is a kissing scene: the hero and heroine kiss, an embrace that the heroine brings to a stop when the hero touches her breast. A pretty stock scene for the tamer Harlequin line. Boy did I ever learn the Harlequin lesson that it's the woman who's responsible for stopping the sexy times before they go too far!  The second scene I remember is one in which the heroine is sitting on the couch, the ankle she's recently sprained hidden under a blanket she's crocheting. The hero is in the midst of berating the heroine for not living up to her promise to visit his sister in the hospital, and, when she seems not to be paying any attention to his tirade, he angrily grabs the blanket and hurls it across the room. Revealing, of course, her horribly swollen ankle. As uppity womanhood is replaced by wounded femininity, our hero is transformed from verbal abuser to tender caring guy. Again, this seems similar to many a Harlequin, with male anger merely a screen behind which hides the vulnerable loving man. I don't think at the time I realized the underlying dynamic here—that "uppity womanhood is replaced by wounded femininity." I liked the fact that male anger could be changed, somehow, made less threatening, even though I did not understand the cost the heroine here paid in order to achieve this transformation.

When the book arrived (complete with a sweet "thank you" note from the reseller!), it migrated to the top of my TBR pile, and I breezed through it in a quick evening. To my surprise, the heroine, Carrie, seemed far more annoying, far less kind, than I had remembered her. A child of privilege, Carrie is supported not by a job, but by a stipend by her wealthy parents. A stipend she spends on clothes and travel; she's just returned from a shopping jaunt to Paris, where she met the aforementioned cad and dumped him via letter. I can hardly imagine identifying with such a girl, growing up as I did with parents who had been raised in the working class and who had, through education, raised themselves into the middle class.

Carrie is also a bit condescending to her less intelligent friend, Dee (although admittedly the rather wet Dee is so annoying in her constant harping about whether Carrie did the right thing by sending the letter to Lance Stevens). Dee is eager to find her future mate, while Carrie, whose parents constantly bicker and place her in the midst of every argument, has little desire to marry, a desire the text is obviously at pains to correct. As a teen, did I read against the text's intentions, admiring Carrie for her unusual stand in regards to marriage? Or did her family situation appeal to me, given the fact that my own parents were undergoing marital difficulties at the time? I can't say that I remember for certain.

Stone Harland is not as overbearing an alpha male as I had expected, although he certainly embodies many of the alpha male's characteristics. He's a rich guy (though we never see him at work); he's compellingly handsome; and he demands far more often than he asks, especially when it comes to Carrie. Carrie likes to be in control of her own life, though, and constantly finds ways to tweak or disrupt Stone's plans, even though ultimately she doesn't challenge them (for example, telling him she'll drive her own car to the hospital, rather than assenting to his "I'll pick you up at two" directive). He stops their first sexual embrace when she asks him to, and only kisses her out of anger (a familiar impulse in Harlequin heroes, as I recall) once, after she returns his "fake" engagement ring. Was I drawn to this book because its hero was a tad less overtly sexist than many of his counterparts? I'd have to reread some other books from the period to see if this theory holds any water.

I think the one thing I can say for certain is that the level of sexuality in this book seemed just right for my never-had-a-boyfriend 14-year-old self. Hot kisses, a tiny bit of groping quickly put to a stop—enough sex to be titillating, but not enough to be too frightening, too overwhelming. There was tension, excitement, but safety, too, in these sex scenes—something similar to nursing a crush on a compelling pop star, someone with whom you'd never (except in your wildest dreams) have the chance to actually having sex.

I did not remember the book's ending at all. Stone puts an engagement announcement in the newspaper, despite Carrie having given him back his ring. This sends an irate Carrie speeding down the motorway to his country house, where Stone, of course, reveals his love for her. And of course, Carrie has recognizes that she's fallen in love with him, as well, and her fears about marital discord fall by the wayside ("How could she tell him, after all she had said against marriage, that to have him as her husband was all she would ever want?" [182]). This time, it's Stone, not Carrie, who brings the sexy times to a halt ("one of us had to be sensible" [185])—did I find this appealing? Or condescending? I'm guessing that Stone's highhanded behavior in both instigating this confrontation or in stopping it before its sexual climax would have been the appeal, so I'm not surprised that the ending was not one of the things about the book that easily came to mind before rereading.

I had fun rereading this book from my youth, although I can't imagine finding my nearly fifty-year-old self compelled to reread it over and over as I did then. I am curious to find that other book that stands out from my adolescent reading—anyone remember a revenge plot about an (Italian?) guy wanting to hurt a man by marrying his daughter, forcing her to have sex with him a lot, and then (of course) falling in love with her, despite his own wishes?


Have you ever gone back and reread a category romance you first encountered as a teenager? Did you find yourself responding similarly to it as you did when you first read it? Or differently? Did you notice different things? I'd love to hear about your experiences...