It's pretty rare to find depictions of Jewishness in romance fiction. It's even more rare to find them in English-set historical romance. If an author wants to write a Jewish character, s/he has to content with the weighty history of past depictions of Jewishness in English literature, a history which features two quite different stereotypes. The first, epitomized by the famous figures of Shylock, Fagin, and Svengali, is of the evil Jew, the demon Other—the moneylender, the thief, the stealer and manipulator of (good Christian) children. Not quite as damaging, but equally limiting, are portraits of the Jew as cardboard saint, sometimes created by Jewish writers themselves, sometimes by Christian writers such as Maria Edgeworth and Charles Dickens who had been upbraided by Jews for anti-semitic portrayals in their previous work. Neither stereotype is likely to have much appeal to the modern romance reader. Far easier to not mention a character's cultural or religious background at all than to have to fight to overcome such a heavy burden of negative stereotypes.

To open a Regency romance, then, and discover that your book's protagonist is named Ash Cohen, is more than a bit of a surprise. To find yourself introduced to Ash while he is in the midst of fleeing from the latest flat he and his younger brother have just swindled is nearly a shock. But Rose Lerner, the author of True Pretensions, is not simply falling into lazy stereotypes in her creation of Asher and his brother Rafe (Raphael); instead, she is confronting such stereotypes head-on.

Ash is hardly the Jew with a halo of gold. Ash uses his very friendliness to persuade others to trust him, trust him enough to hand over their money for plans he has no intention of fulfilling. While he never swindles more from a flat than the flat can afford to lose, he hardly loses much sleep over the money he takes; having grown up in London's slums scraping out a living to support himself and his brother by thieving, bodysnatching, and occasionally selling his own body, Ash figures the comfortably well-off still have more than enough to get by on, even after an encounter with the Cohens. "What's so bad about being selfish, anyway? Everybody's selfish.... Selfishness is as natural as breathing. Unlike you, I don't blame people for how they're made. Next you'll be talking about original sin like a goy," he tells his brother when Rafe protests (Kindle Loc 1180). Behind every romance bad boy is a past that made him the way he is; behind the Jewish stereotype, Lerner suggests, is a history of abuse and oppression the stereotype is meant to hide.

But if Ash is selfish, he's practically selfless when it comes to his younger brother. So when, at novel's start, Rafe decides that he's tired of the swindling life, Ash comes up with a plan for one final con, a swindle that will ensure his brother the life he never had: he will find a wealthy woman and play matchmaker (shades of Fiddler on the Roof), using his charm and skill to convince her to fall for his handsome, kindly brother.

That Ash's mark is the epitome of upright, conservative Englishness makes the irony all the sweeter when Ash finds himself falling for Tory political patroness Lydia Reeve himself. Lydia, whose father has recently died, has been unable to persuade her younger brother to support the political causes which she and her father held so dear to her heart. Such support takes not only a willing heart and hands, but substantial amounts of money: money to purchase new coats for the children in the workhouse; money to pay for an apprenticeship for the child of an ally; money to support schools, and hospitals, and the pet projects of all those who supported the Tories in the last election. Lydia has an inheritance, yes, but she can only get access to it if she marries. Rafe would seem like the perfect solution—if only Lydia didn't find herself drawn to his less handsome, but far more compelling, older brother...

Ash believes it better to keep his cultural heritage a secret: "When I have a drink with a man in a pub, and he doesn't know I'm Jewish... what's the difference between a Jew and a Gentile, really? It makes no difference, but I believe it would to him, so I don't mention it, and we can go on drinking together," he tells Lydia after Rafe lets their secret out of the bag. But deep inside, Ash knows keeping the secret isn't just a question of "practicality. But somehow he was ashamed to explain how it would hurt, to see himself turn from a fellow soul to a dirty Jew" (Loc 3935). Keeping a pane of glass between himself and those hurtful emotions allows him to go through life liking everyone he meets. But does it also stand in the way of forming deeper connections than just liking?

How does cultural identity, and our relation to it, influence our relationships? How do larger cultural stereotypes? Does it matter it we pretend to be one thing to the world, while truly we are another? If we pretend even with our most intimate relations? When does pretense become the truth? Weighty questions for a historical romance, no doubt. But when asked by a writer as skilled as Rose Lerner, their consideration proves just as much of a pleasure as the slow-build romance between two people who have far more in common than their cultural identities would ever suggest. 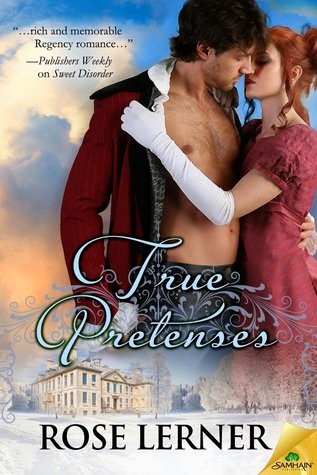