"Hey, be nice. Understand?" Tom didn't need to move a muscle to make it clear to Cash how serious he was.
Buried beneath the look they shared was a history of letting bros know when the chick you were banging became something more and no further wisecracks were allowed.

There I was, happily turning the pages of Amy Jo Cousins's excellent New Adult gay romance Bend or Break (about which more next week) when the above-quoted passage stopped me in my tracks. I grew up the eldest of two sisters, and while I had a few male cousins, they were all far younger than me. I did have a few individual boys with whom I was friends in high school, but as a shy, decidedly non-athletic girl, I didn't tend to hang out much with boys en masse. So I've always been strangely fascinated by stray hints in the books I read of what adolescent boys are actually like when they get together without girls in the mix.

But the above passage didn't just catch my interest; it both intrigued and appalled me. Days after reading the book, my brain still kept circling around this one passage, poking at it like a tongue at a loose tooth. Perhaps if I write about it, I can get it out of my head...

[FYI, it's significant to know that while Tom at the time of the novel is a guy who is reeling after being knocked down from his pedestal of male and class privilege, he used to be a member of the wealthy, entitled, unthinking jock crowd: the "bros" to whom he refers are his fellow male athletes.]

The first thing I notice here is the line that Tom and his fellow male jock friends draw between "the chick you were banging" and the girl who becomes "something more." For Tom and his friends, having sex is something you do on a regular basis for pleasure, to relieve your sexual and/or other tensions through a physical-only connection. The male is placed in the position of actor here, the girl in the position of object being acted upon: "the chick you were banging." That chicks are there to be objects for boys' lust is taken for granted by Tom and his male friends. Tom's easy assumptions made me wonder, though—do the "chicks they are banging" know that to the boys with whom they are having sex, they are physical objects and no more? 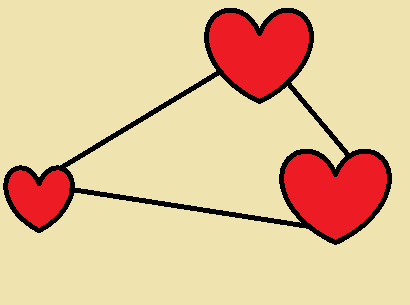 The second thing that I'm noticing is the way that a male friend's banging-mate is one of the many, many subjects which can serve as the grounds for teasing and insult. Such teasing and insulting serves not to drive a wedge between male friends, but instead to cement those friendships more tightly together. Having read Eve Kosovsky Sedgewick's Between Men (1985), I was quite familiar with the concept of sexual triangulation, that in love triangles with two men both fighting for the love of the same women, male rivalry often serves to cement bonds between the two men as much as, or often more than, it does to forge bonds between one (male) lover and the (female) beloved. In other words, as one of my grad school professors explained it, "You know, when two guys are fighting over a girl, and it seems like it's more about their relationship to each other than it is about the girl?"

The girl may be object in Sedgewick's sexual triangulation model, but at least she's a purportedly valued one. Tom's comment, however, shows that sexual triangulation can work just as well when the female point of the triangle is denigrated rather than valued. Dissing another guy's "chick" can serve the same purpose as setting yourself up as a rival for his chick's attentions.


Can you think of any love triangles in romance novels where the tension between the two rivals seems far more important than that between either of the rivals and the object of their mutual affection? Or is this something that would be anathema to the romance form?