So many of RNFF's favorite authors have new books coming out this summer that another Short Takes blog is in order for June: 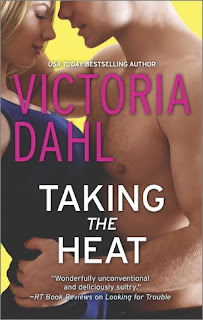 Victoria Dahl's latest contemporary, Taking the Heat, features a heroine rather different from the typical Dahl protagonist. Though she's funny as hell ("There are men out there who will put their penises in a tree. There are men out there who will put their penises in sheep. You do not need to feel flattered that a man wants to put his penis inside you"), Veronica Chandler is majorly lacking on the self-confidence front [Kindle Loc 259]. All her life, Veronica dreamed of escaping the confines of her Wyoming hometown and making a shiny new life for herself in New York City. But the reality of Big Apple living proved far less enticing than the dream, and at twenty-seven, Veronica finds herself back in Jackson Hole, licking her wounds, dependent again on her emotionally-distant father. Even her success in her new job as "Dear Veronica," a newspaper advice columnist, can't persuade her that she's anything more than a fraud. Only when she starts taking her own advice as seriously as her readers do does Veronica begin to understand the difference between faking it and being it. But when a new-to-town hot guy librarian begins to take an interest in the real Veronica, will his good guy persona turn out to be just as much a fraud as was Veronica's big-city-girl mask? 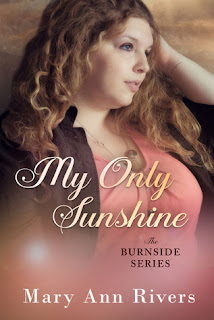 One of the first releases from start-up publisher Brain Mill Press is a novella by Mary Ann Rivers, set in the world of her Burnsides series. In My Only Sunshine, Rivers experiments with the dual narration typical of contemporary romance, not just for the sake of variety, but as the best way to capture the psychological nuances of her two protagonists. Chapters from the point of view of Mallory, written in the third person past tense, are purportedly from the memoir the adult Mallory has written about her adolescent crush on John, now a famous musician, while chapters from John's point of view, which tell the story of their meeting in the present after fifteen years apart, are told in the first person present tense. During their teen years, Mallory "was everything that was the opposite of John—short, fat, pale, poor, invisible, untalented" (71). But for one brief year, the two shared almost every evening together, "making a kingdom for ourselves under the stars": talking, sharing, feeling, and above all, longing (119). But neither had the confidence to talk about their relationship openly, barely acknowledging each other at school, and certainly never daring to try to transform their emotional connection into a sexual one. But after a violent altercation breaks up Mallory's family, John finds he's not only lost his chance to kiss the girl he loves, he's lost the girl as well. And he's left alone with his regrets, and his guilt for not intervening when he should have, too selfish to let anyone else share the secret magic that he found in Mallory.

As an adult, Mallory has used therapy and writing to help her come to terms with the traumas of her childhood. But John is still hauling around the albatross of his guilt, a guilt that has prevented him from reaching out to Mallory, even after the publication of her memoir about their teen year. Only after he forces himself to read a description of her memoir, The Encyclopedia of an Ohio Girl in Love, and finally realizes she loved him then as much as he loved her, does he find a courage to match Mallory's, and contact her. Such a reunion story could have felt schmaltzy, or unconvincing, in the hands of a less talented writer. But Rivers, who makes the unconventional choice to have the hero, rather than her "Venus-covered-in-sea-foam" bodied heroine, be the one still learning to cope with adult life, has the writing chops to make a more-than-persuasive case for the power of adolescent love, and its potential to last far into adulthood. 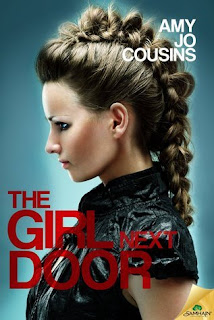 The immensely entertaining sidekicks in Amy Jo Cousins' Off Campus get their own story in The Girl Next Door, which moves from the first book's college setting to a first job in the big city milieu. Charles "Cash" Carmichael, a privileged legacy admit to an Ivy League college, had a major awakening when his best friend announced he was in a romantic relationship with another man. Now, having left a cushy job with his family's Boston lobbying firm and taken a low-paying gig teaching soccer to elementary-school kids in a working-class neighborhood in Chicago, Cash has become the point man for all things gay, though he strictly goes for the girls himself. So much so that his high-school-age cousin, Denny, runs to Cash when his parents refuse to believe him when he announces he prefers to sleep with boys. Not feeling all that confident in his ability to provide the proper guidance, Cash calls on his one-time college fuck-buddy, iconoclastic, feminist, bisexual Steph, who has recently moved to Chicago to be closer to her estranged father, for help.

Sparks have always flown between Cash and Steph, and even though Steph broke off their relationship in college to be with another woman, soon the two are back to their old college sexual hijinks. Each insists to the other, though, that it's nothing but casual fucking. But as they spend more time together, Cash is growing increasingly frustrated with the distance Steph insists on maintaining between them, and "how badly he'd fucked up back in school when he hadn't taken her, taken them, seriously" (1961).

You might think reading an entire romance novel from the point of view of a privileged, not entirely quick-on-the-draw heterosexual guy might not be so entertaining, but you'd be oh, so wrong. Cousins does amazing work conveying the character and voice of a young man who should embody everything conventional and oblivious, but who is open and kind enough to learn that there other equally valid ways of being, and to embrace the unconventional with honesty, vibrancy, and joy.