A little over a week ago, romance author Heidi Cullinan wrote a blog post in protest of the shallow article about the romance genre that recently appeared on the influential culture web site, TheMarySue. In addition to refuting many of the anti-feminist claims put forth about the genre by that article's author, Alex Townsend, Cullinan compiled several lists of romance novels that provided evidence to back up her refutations, including "Women in positions of power in romance."

I discovered Alisha Rai's erotic romance, A Gentleman in the Street, on that list. But after reading Rai's romance, I'd argue that her accomplishment consists of far more than just giving her female lead a job as the CEO of her own company, A. M. Enterprises, which owns and operates "high-end bars and nightclubs in some of the most sophisticated places in the world: London, Dubai, New York, Miami" (Kindle Loc 477). For her novel actively explores the misogyny deployed to contain and restrain powerful women, including her protagonist, 34-year-old Japanese-American Akira Mori. What's more, it explores this not through some obviously evil, deluded, sexist villain, but instead through the story's main love interest, shy white nice guy Jacob Campbell.

Jacob's feckless doctor father and Akira's disapproving mother married after only a month's courtship, and divorced almost as quickly. Jacob and Akira were already old enough to be out on their own at the time of the marriage (good boy Jacob in college, bad girl Akira living off a trust fund from her hotelier grandfather), but even after only a few family get-togethers, each found him/herself unexpectedly, and unhappily, attracted to the other. Jacob, worried that the strength of his lust for Akira might lead him to act irresponsibly toward his family, as his father always has when he meets a new woman, treats Akira with all the distance and even contempt he can muster. And Akira, used to acting outrageously to try and attract the attention of her emotionally distant mother, dons the role of provocative temptress in response. Not that it's all an act; Akira's sexual tastes run to the free and kinky, even if with everyone besides her mother and Jacob she tends to keep that side of her life private.

Fast-forward fourteen years. Both Jacob's father and Akira's mother are dead, and Jacob and Akira have each crafted successful careers for themselves, Akira as the head of the above-mentioned conglomerate, Jacob as a writer of spy novels and surrogate parent for his younger sister. What still hasn't changed, though, is Jacob and Akira's apparent dislike of each other, a dislike that neither recognizes as a cover for their uncomfortable attraction to one another.

Early in the story, after an unexpectedly emotional encounter between Akira and Jacob turns sexual, Akira thinks to shock Jacob and drive him away once and for all by inviting him to watch another man have sex with her in a closet during a tony fundraising party. But Akiri is the one left reeling by Jacob's unexpected willingness to play voyeur. Turns out that Jacob is not as vanilla as he's always led others to believe.

When Akira challenges him to explain his shocking behavior, Jacob finally admits his long-time lust for his erstwhile stepsister: "I just can't look at you without... without wanting you" (971). But Jacob's admission of his passion doesn't lead to romance happily ever after; in fact, Jacob's confession makes Akira majorly pissed off:

It was nice when a man you desired reciprocated the attraction, but not when that man was otherwise repelled by you. Her voice was a hoarse whisper. "You made me think you despised me for fourteen years, and now I find out it was because I committed the cardinal sin of attracting your lust.... Guess what? I reserve the right to not be punished for your desires." (990)

Jacob clearly recognizes the sexism behind calling a woman a "slut," but at the same time, he hasn't seen how his own disapproving reaction to Akira has been silently slut-shaming her for the past fourteen years. He even made the villainess in his first novel a rich, sexy, mouthy, beautiful, shallow, unlikeable heir to a fortune, and an Asian to boot. She may have been Korean-American rather than Japanese-American, as Akira is, but even Jacob's younger brothers realize that "Lidia was Akira." And guess what? Jacob killed off femme fatale Lidia in that first novel, symbolically if unconsciously punishing Akira for "making" him desire her. Just what she accused him of. Men, even nice men, Rai's novel suggests, may be as prone to internalizing sexism as women are.

Jacob is appalled by what his brothers and Akira have shown him about his own behavior:

He prided himself on being a good man, a progressive man.... He could posture about disapproving of Mei calling her daughter a slut. He could take away all of Kati's electronics. But at the end of the day, was he really much better? He may not have said the derogatory words, but his aloofness could easily have been taken as disapproval. It didn't matter he hadn't intended it. What mattered was how he had made her feel. (1157, 1175)

And, good guy that he is, Jacob knows he has to make it up to Akira. Even if he has to act out, rather than just dream about, "the Pandora's box of [sexual] fantasies he had kept contained in his brain for the majority of his adult life" (1158). And given his fourteen years of disdain, it will take a lot of proof before Akira will let Jacob into not just into her sexual life, but also into her emotional one. 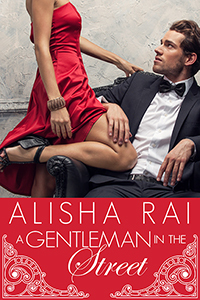 Alisha Rai
A Gentleman in the Street
self-published, 2014
Posted by Jackie C. Horne at 9:00 AM