Short reviews of new releases by favorite RNFF authors, all focusing on issues of romantic commitment: 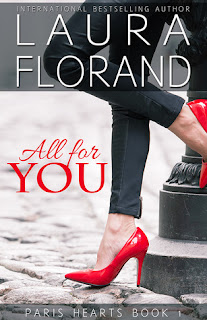 Laura Florand
All For You
(Paris Hearts #1)
self-published, 2015

Florand revisits a theme she tackled in The Chocolate Kiss: how to have a heterosexual romantic relationship with a protective man without ending up feeling like the fairy tale princess in need of rescuing. Our protagonists here, though, far far different from the successful pâtissieres of Kiss. Célie and Joss grew up together in a housing projects of Tarterets, a Paris banlieue notorious for its crime and violence. As a teen, Célie long nursed a crush on her older brother's friend, a crush she always believed was unrequited. Then, she had to nurse a broken heart when Joss abruptly left to join the Foreign Legion without a word. Though Célie "always kind of wanted to be the small woman who got protected herself" (Kindle Loc 272), in the wake of Joss's abandonment she's picked herself up and made her own way in the world, apprenticing and earning a place as a gourmet chocolatier in one of Paris's most renowned laboratoires. So, when Joss suddenly reappears five years later, Célie is understandably not all that happy to see him.

To Joss, it all made sense: to be worthy of the energetic, optimistic, so-alive girl whom he loved, he had to make something better of himself. Otherwise, they'd end up together, but stuck in dead-end jobs, scraping out a threadbare existence in the projects. But somehow, he hadn't really thought about what would be happening to, and for, Célie while he was away: "He'd come back to get her out of there, now that he was big enough to carry them both to the top of the world's glass mountain but she'd already done it for herself. All by herself" (411). But Joss has learned a lot about persistence during his years in the Legion, and he's not about to give up on his dream of a life with Célie just because she's a little mad at him...

Readers might be inclined to sigh over Joss's obvious good intentions, the strength of his romantic devotion to Célie, and his self-doubt and overwhelming need for her, and thus to root for Célie to immediately forgive and forget ("I would wait more than five years for you," the rather inarticulate Joss pens to Célie in a note). But Florand, and Célie, know better: Joss's overprotective ways, and his fantasies about Célie, aren't simply sweet, they're blind, and limiting: "...in your fantasies I was only what you needed me to be. Not what I actually was" (2238). As Célie thinks to herself, "It was kind of infuriatingly unfeminist how tempting it was to just yield to [his] need, to say, Oh, if that's what you need so much then you can have it. To just give up her own body to his demands. She caught herself. This was for her, too." (2209)

"[Men] are kind of raised to want to go out on quests to earn the princess's hand by becoming a hero. It's, ah, hard for us to wrap our minds around a princess who wants to do all that dirty work with us. Makes us feel—insufficient. Not man enough. Not good enough," says Célie's boss, Dom (1275). But for Joss to deserve Célie, he'll have to overcome that social message, to "do something else for her besides strive to be your best.... You might have to adapt to what she needs from you. Which might be something different" (2937). For example, a partner who consults her before making major decisions that will impact her life as well as his. 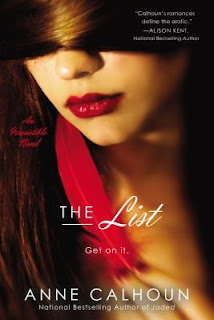 Blind devotion isn't the problem for the couple in Calhoun's latest erotic romance, despite the book's suggestive cover. Instead, it is fear of commitment, specifically on the part of the woman. The List opens with a high-stakes bang: Tilda and Daniel, who have been married for only a few months, in the office of a marriage counselor, Tilda wanting a divorce, Daniel mystified as to why. The story then backtracks a year, depicting the first unusual meeting between the FBI agent who dresses more like a college professor and the high-end stationary shop owner who moonlights as a matchmaker, then proceeds through their erotically-charged but emotionally casual hook-ups, a relationship scare, and an unlikely, impetuous marriage.

Tilda keeps not a list, but notecards on people she's met, especially those who've confided their deepest secrets and needs, and takes deep pleasure in bringing people together: "Every time she matched someone on her list, or simply introduced two people who might enjoy knowing each other, she'd proved that she understood that most basic of human needs: to see someone and be seen by them in turn" (778). But Tilda's never been on the lookout for a match for herself, not wanting to be seen by anyone else, for reasons that Calhoun only gradually reveals over the course of the novel. In fact, a major part of Tilda's charm for Daniel is this sense of mystery about her, the knowledge of hidden depths that remain elusively just out of his reach. But if Daniel is to have a chance of convincing his wife not to abandon their marriage, he'll have to move beyond the allure of secrecy, and plumb the shame and pain that lie beneath.

And how can you not love a book whose protagonist declares "Virginity is a cultural construct.... Given the many,many ways two people can have sex, limiting the question to the penetration of penis into vagina is a rather narrow approach. Anyway, why is it a loss? I gained knowledge, experience" (1000)? 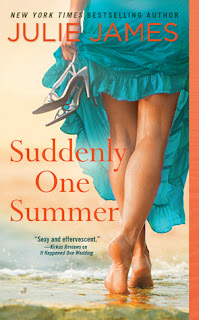 As in many a Julie James novel, Suddenly features both a man and a a woman who are not at all interested in romantic commitment. At least not initially...

Neither divorce lawyer Victoria nor investigative reporter Ford are looking for a long-term romantic partner, and not just for the reasons espoused by James' usual thirty-something highly-educated successful professional types—too much work, too little time. Victoria has moved on from her difficult childhood, dealing with a father who abandoned her and her mother, and a mother who attempted suicide in response, and now runs her own successful family law firm in Chicago. But her personal experiences, coupled with a job focusing on the dissolution of romantic relationships, makes her "self-select out of the happily-ever-after rat race." As she explains to new neighbor Ford, "I like keeping things simple and fun. No obligations, no expectations, no endgame of a marriage, two-point-five kids, and a minivan in the suburbs" (page 133). A position that the equally commitment-avoiding Ford, who grew up with an alcoholic father with on-again, off-again emotional tendencies, is happy to applaud. Victoria's more than happy to hook-up with the hot guy in the apartment next door (so convenient, getting a sex fix in less time than it takes to get a mani-pedi, and home again faster, too). And Ford isn't complaining, either.

After a break-in to her townhouse leaves Victoria subject to unexpected panic attacks, the über-confident lawyer does what any professional would do—she consults a behavioral therapist, determined to conquer her annoying weakness. But when said therapist wants not only to teach her new breathing techniques, but to delve into her emotional past and present, Victoria is hardly thrilled. Especially when she begins to realize that her casual hookups with new neighbor Ford are starting to feel far too serious for comfort.

A subplot about Ford's sister and the search for the father of her new baby takes the place of the usual FBI/mystery plot of James' earlier books, reinforcing the issue of how to balance independence and self-sufficiency with the equally strong need for emotional connection.
Posted by Jackie C. Horne at 9:00 AM