Teaching Feminism to the Younger Generation

Despite being a scholar of not only romance but also of children's literature, I'm not really all that keen on romance novels that feature kids as secondary characters. Romance novels are already inclined toward the emotional, and when kids appear on the scene, too often their emotion can slide into sentimentality (in the sense of emotion of the shallow, uncomplicated type). Kids put in danger in romantic suspense; kids used as comic relief in contemporary romance; sticky-sweet kids that urge us go "oooh" in all different subgenres—often the portrayal of children feels more like treating kids as objects, rather than as individual, unique characters. Thanks, but no thanks.

I was surprised, then, to find myself enjoying the interactions between the teen girl rugby players and the two adult romantic protagonists featured in Kat Latham's latest sports romance, Taming the Legend. In large part, I think, because both Camila Morales, the director of Camp Lake Sunshine, and Ash Trenton, retired rugby star turned temporary camp rugby coach, model feminist ideas and behaviors to their younger charges.

Such modeling isn't the point of the story, of course. Taming the Legend is a past-lovers torn apart only to reunite later tale, a staple romance novel trope, and the primary focus of the novel is on Ash and Camila's (re-)developing relationship. The fact that their modeling just happens, almost as if teaching kids about feminism is something both adults naturally take for granted, though, only makes it all the more appreciated.

Some examples of what I'm talking about: 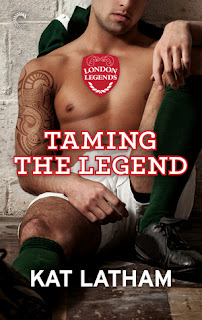 During the first day of workouts, when Ash is introducing rugby to his rather reluctant female campers:

Hannah raised her hand.
"Yes?"
"Running hurts my boobs."
A couple girls snickered.
"Yeah? I can't say it's all that comfortable for my bollocks either. I guess you'll have to get over it."
....
"Let's get something straight." Ash said. "Being a girl is not a disability. Boobs, periods, cramps... I know you've got them, but I don't give a monkey's toss about them.... Look, I've spent my career training with men, but I don't care that your bits are different than theirs. They worked hard, and they've achieved great things. I expect the same from you, so I'm going to treat you the same." (Kindle Loc 1928)


And during the big rugby tournament, when one of the players spots Ash's former (hunky) teammate, whom she's been crushing on, with his girlfriend, Camila doesn't hesitate to call Tori on her sexism:

[Tori] glared at the petite woman Liam Callaghan had his arm around. "That bitch better get her hands off my man."
"Tori. Language. And about a dozen other things, like he's clearly too old for you and already taken. And don't call other women bitches just because they have what you want. And did I mention too old?" [Camila said] (4370)


Small, brief moments in a much larger story, yes. But important, and exciting, nonetheless, such casual, taken-for-granted examples of everyday feminism being taught to the next generation. Something certainly worth noting, and even celebrating.


Can you recall any other romance novels that include such scenes of adults teaching, modeling, or enacting feminist ideals with or for child or teen characters?
Posted by Jackie C. Horne at 9:00 AM