In both adventure fiction and in romance, pacing plays a key role. Adventure is all about the quick—one breathtaking danger immediately followed by another, and another, and another, no time to think or feel, only to react. Romance, in contrast, seems more about the slow—a gradual building of feeling for the other, with sexual tension all the more delicious the more it is delayed. It takes a deft authorial hand to combine such diametrically opposed genres. Add in the requirement that an action-oriented romance to also be invested in portraying a relationship of equals, and it's probably not that surprising that reviews of adventure romances have been few and far between on RNFF.

In Grim Shadows, author Jenn Bennett performs an impressive juggling act, successfully combining not only adventure and romance, but fantasy and historical fiction as well. The second book in her Roaring Twenties series, Grim Shadows gives us an Indiana Jones-type hero with a romantic partner far more memorable than any of the heroines with whom Indy was ever paired.

Bennett's story opens with with our protagonist, archeologist Lowe Magnusson, in immediate danger. On his way back home to San Francisco from a successful dig, Lowe realizes that two men are far more interested in him, and the priceless artifact he smuggled out of Egypt, than they should be. So distracted by their pursuit is Lowe that he temporarily forgets that he's supposed to be meeting the daughter of a curator at the de Young Museum to whom he's hoping to sell his contraband artifact. Hadley Bacall, as cool and logical as Lowe is spontaneous and imaginative, interrupts Lowe's attempts to sweet-talk himself onto a different train to remind him of his promise. And before you can say "boo," the two seemingly opposites are bantering, bickering, and then fleeing together from two thugs with revolvers.

Between Lowe's inventive lies and Hadley's helpful Mori (spirits who react to Hadley's anger and fear by attacking whatever is causing them), the two manage to evade their pursuers and hop a train to SF. Irreverent Lowe and intelligent Hadley immediately start debating decisions and qualifications, a debate that inevitable leads to gender:

"Is this what you do? Lie your way out of every situation you encounter?"
"I prefer to think of it as inventing a character. Acting."
"Acting.... Why wasn't the truth good enough?"
"You mean, I should have told him that I'm an archeologist who found a piece of a mythical artifact purported to open a door to the land of the dead—and two hired thugs were shooting at us to get it, so we jumped the train like hobos?"
"You, sir, aren't an archeologist. You're an entrepreneur."
"I have a degree."
"And I have two."
He casually kicked up his feet on the seat next to her, one ankle crossing its mate. "But no fieldwork."
"Not for lack of wanting, but kudos for making me feel small."
His face pinched as if she'd slapped him. But only for a moment before blankness settled over his features. He stretched his neck, loosening muscles. "You said you wanted honesty." With his head lolling on the seat back, he rested his hands on his chest and closed his eyes. "If you'd like me to tiptoe around your feminine feelings, I'm happy to do so."
"I want to be treated like a man."
He glanced at her from under squinting eyelids, one brow cocked.
"I mean to say, I want to be given the same directness you'd offer a trusted colleague. I am your equal. Speak frankly to me, or not at all." (20-21)


To Hadley's surprise, Lowe gives her demand due consideration, and acknowledges her right to be treated as an equal. But in his own insouciant way, first by inviting her to call him by his first name, then by taunting her, a taunt that takes a surprising turn:

"You know, now that I'm thinking about it," he said with his eyes still closed, "if we were trusted male colleagues on a first-name basis with each other, I'd probably be bragging about how I just got a peek at a bea-u-ti-ful ass and nice pair of legs, and what a shame it was that the strange woman who curates mummified corpses in the antiquities wing of the de Young Museum dresses like an old maid."
The nerve.
"And I'd tell you that she dresses that way so that the men she works with treat her with respect, not as the privileged daughter of Archibald Bacall."
His voice softened. "Then I'd tell her that she shouldn't change herself to please anyone, and her coworkers are probably overeducated Stanford graduates with no real-world field experience, so who the hell cares what they think, anyway?"
"I'm a Stanford graduate." (21-22)

Are Lowe's hints about being open to treating Hadley as an equal just another of his lies? Or does Lowe really admire Hadley for more than her bea-u-ti-ful ass and her father's money? Given that RNFF is featuring Grim Shadows, the answer is probably not surprising. But as this is as much an adventure novel as a romance, the pleasure is in the process as much as it is in the answer.

When Hadley's father reveals to Lowe that there are four other parts to the amulet he found, parts which Dr. Bacall once had but which his now-dead wife hid from him, Lowe agrees to undertake another search. A search in which he cannot make much headway without Hadley's help. Help that becomes more and more important as Lowe and Hadley begin to fall for one another between bouts of searching and fighting off mystical creatures who are also pursuing the amulet. And as they begin to realize that Hadley's father is searching for the amulet not out of academic interest, but out of fears for both himself and his Mori-cursed daughter. 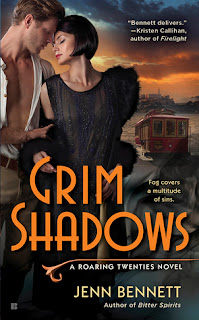