Though men have been responsible for starting and carrying out the majority of wars our planet has experienced*, women are often invited to play an integral role in picking up the pieces after war has ended. Epic fantasy, typically constructed around world-changing battles between good and evil rather than the less overtly heroic work to rebuild countries and societies inevitably damaged by them, has, unsurprisingly, traditionally featured more men than women, even when its primary audience has been young adult readers. Yet with the publication last year of Kristen Cashore's Bitterblue, and this month, Melina Marchetta's Quintana of Charyn, young adult fantasy has begun to explore what happens after the evil has been defeated. In particular, both authors ask readers to recognize that mending the physical destruction caused by war is likely to be far easier than repairing the emotional trauma war inevitably inflicts on both sides of a conflict.

As I've already written about Cashore's novel on Goodreads, I'd like to focus on Marchetta's in this post. Quintana is the third book in the Lumatere Chronicles; much like Tolkien's The Two Towers and The Return of the King, Marchetta's Quintana is less a sequel than a continuation of an ongoing story. If you're a fantasy fan and you haven't yet read the first two books, Finnikin of the Rock and Froi of the Exiles, I'd highly recommend them.

In Quintana, relations between former warring nations Lumatere and Charyn look to be on the verge of disintegration. Yet the book does not focus on diplomacy and political maneuvering; instead, it explores the difficult relationships of five related romantic couples, each of whose members are either leaders or allies of, or high-level advisors to, the two countries. Their romantic difficulties, and the work each couple must do to solve them, suggest in miniature what the two enemy nations must accomplish before they can move beyond their brutally antagonistic history and forward into a peaceful, generative future.

Five couples. Queen Isaboe of Lumatere and her consort, Finnikin of the Rock. Provincaro De Lancey and Gods' blessed priestling Arjuro. King's advisor Gargarin and King's whore Lirah.  Lucien of the Mont and Phaedra of Alonso. Queen Quintana of Charyn and Froi the Exile. Two from the elder generation that helped begin the conflict, three from the younger, which has had to live with the trauma of its aftermath. Four heterosexual couples, one homosexual. One couple both from Lumatere; two couples who are both from Charyn side; and two couples that each contain a member from each nation. One couple, apparently rock-solid at the end of Froi, suddenly erupts into anger and doubt; they must learn how to move beyond the fear of being lied to, of being betrayed, in order to help one another grieve a tragic loss. One couple, long-separated due to weakness and betrayal, must believe that people can change for the better. One couple, finally reunited after years of separation, must accept the limits their situation places on their love, for the good of both their child and their country. One couple must forgive the harm each has done the other out of prejudice and hate. And one couple must accept enforced separation, not only once, but multiple times, waiting until others who love them have laid the groundwork necessary to ensure that their joining will not cause irreparable harm.

And all, because they play in the realms of power, must acknowledge that the demands of the polis will often come before the demands of the personal: "In the games of queens and kings, we leave our dreams at the door and we make do with what we have. Sometimes if we're fortunate, we still manage to have a good life," Isaboe tells Froi. But the sacrifices never mean that the love is without meaning:

[Phaedra] made a sound of regret. "We come second, you and I... Our allegiance is always to our kingdoms. Without that allegiance, our people would fall.
She placed her head back against his chest, and he felt her tears. "This is not our time."
"But that will never mean I love you less," he said. (310)


To keep faith with that love, to make peace with one another, and peace between their countries, all ten characters must learn to "look on the side of wonder" (180).  Rather than viewing the world through smog-tinted glasses, only seeing the disastrous and the damaged, both lovers and peacemakers must live life "drown[ing] in hope rather than wallow[ing] in despair" (324). Only then can lovers, and nations, begin the difficult, feminist work of cooperation and compromise required to pick up the pieces after the fighting is done.

Big thanks to AQ for sending me an ARC -- 25 years, and we're still friends!


* Primarily because throughout history, men have held the leadership positions in most countries. Women rulers have begun their fair share of wars, when they've had the chance (Cleopatra; Elizabeth I; Victoria I), although they often seem to be on the side of those rebelling against invaders or oppressors (Boadicea; Lakshmibai of Jhansi; Zenobia). 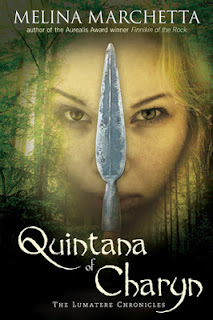 Next time on RNFF
RNFF goes on vacation:
See you back on Friday, March 29th
Posted by Jackie C. Horne at 9:00 AM