Miranda Neville's THE IMPORTANCE OF BEING WICKED

In many ways, Caroline Townsend, the female protagonist of Miranda Neville's latest Regency historical comedy, seems a highly unlikely heroine for RNFF. Caro is a far cry from the intellectual bluestockings of late 18th and early 19th century England, the women whom many point to as the precursors of first-wave feminism. She has about as much interest in visiting the British Museum, listening to a philosophical lecture, or partaking of intellectual conversation as she does of having a tooth pulled. Nor is she a political activist, working to better the lives of the poor or the downtrodden around her. In fact, Caro would much rather throw a party than give thought to much of anything of substance. One Goodreads reader has even gone so far as to christen her with the charming epithet "dimbo."

Yet after I finished The Importance of Being Wicked and put it aside for other, seemingly more worthy, romance heroines, the memory of Caro kept poking at me, insisting that she, too, might just deserve a place within the annals of feminist romance. Does a feminist always have to be bookish? she seemed to chide, laughing all the while at the piles of literary tomes littering my office. Is your bias in favor of intellectual feminism (I had, after all, first engaged with its ideas during my undergraduate years at an Ivy League college) keeping you from seeing the ways I call traditional gender roles and expectations into question? Don't you know why it's important for a feminist to be wicked?


Like a pesky fly, Caro kept buzzing around my brain, teasing me to open the window and let her fly free. Finally, I gave in. Picking up her story again, this time with pencil in hand, I tried to discover just what a dimbo heroine was trying to teach me about feminism and heterosexual romance.

The first thing I noticed, something I had remembered from my first reading, was Caro's unembarrassed embrace of her own sexuality. Caro finds the "prudery of much of the world" a "dismal virtue" (28).  She took deep pleasure in sex with her first husband, admitting without shame how they anticipated their wedding night, and how they continued to engage in passionate sex until his love for gambling overcame his every other desire. She openly acknowledges to herself that she "desperately wanted to go to bed with Thomas, the Duke of Castleton," an inconvenient fact given that the staid duke has come courting not her, but her cousin.

Her desire isn't just a desire to be done to, but to actively do, as well; when she thinks of Thomas, "She'd wanted to sink into his large, protective embrace. To pull his firm stubborn mouth to hers and devour him. To rip off his perfectly proper, not-too-fashionable clothing and discover the powerful body she guessed dwelt beneath wool, linen, and starch. To feel those big hands all over hers" (59). After she and Thomas, improbably but not unsurprisingly, end up engaged, Thomas vows to treat her with respect. But Caro proceeds to seduce him, telling him "You may be prepared to wait, but I am not. I haven't had a man in two years" (200). After they wed, Thomas's precipitous desire and relative inexperience leave her sexually unsatisfied. But Caro is not loath to inform her new husband of his shortcomings. "She pushed him back. 'Not yet. I'm not ready.'" And she uses both words and actions to tell him how to make her so: "Then, her hand on his, she guided his movements until he found the rhythm that pleased her, and she left him to it" (267). Unlike even many a liberated modern woman, Caro has no difficulty speaking openly and directly about her own sexual needs with her lover, a feminist model well worth emulating. 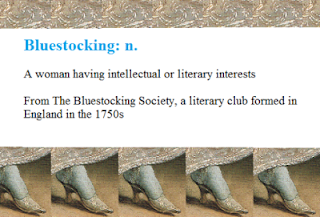 Also unlike many of the bluestockings of the period, who worked hard to prove that they, too, just like men, could be logical and rational, only to find their efforts coming back to bite them when the male Romantic writers condemned them for their lack of emotion and passion, Caro glories in her feelings. A creature of emotions, her role, and major pleasure, in life is bringing joy to those around her, and feeling joy herself. As Thomas recognizes the first time he sees her, "Both her eyes, somewhere between gold and brown, and her dark rose mouth sent the message of humor and enjoyment of life" (21). When Thomas comes to press his suit for her cousin, Caro asks him not how much his estates bring in a year, or how many houses he owns, but instead, "What gives you pleasure? What gladdens your heart?" (25). Cousin Anne remembers Caro as the one "source of fun and giggles" during her rather dour upbringing (43); the many friends she and former husband Robert gathered in their unconventional London home keep returning long after Robert has died: "But it was you, Caro, who made this house a home for so many of us," friend Julian declares (209). Caro enjoys life and laughter and play, and brings those same joys to the friends who surround her. Unafraid to be tarred with the brush claiming women are too emotional, Caro instead embraces the identity, asserting through the way she lives her life the importance of feeling, not just thinking.

Novels for young adults are often described as bildungsroman: coming-of-age novels, stories of an individual's growth from childhood to adulthood. Such stories focus most often on personal growth and maturity. Feminism values this maturing into personhood, into individual identity, in particular when such growth involves recognition of the limiting gender roles society often places upon us.

Yet feminism also values another type of maturity, a maturity focused not only on self, but on self in relationship with others. Caro's story can help us to see the way in which romance as a genre functions to guide its protagonists, and through them, its readers, into a different, later stage of emotional development, the stage psychologist Erik Erikson termed "Intimacy vs. Isolation": the stage of engaging in mature intimate relationship with another. (Beziehungsroman hasn't really caught on as a literary term, has it?) In the majority of romances, intimate relationship is constructed as a heterosexual coupling, but the tasks and goals that must be accomplished to make such couplings possible can also can provide a model for other intimate relationships, by exploring how a young person whose primary emotional work has focused on developing an individual identity must shift gears, must learn to make the sacrifices and compromises intimate relationships require.

In Caro's case, this learning involves recognizing the limits of the very "wickedness" that allowed her to create her own sense of identity, an identity she forged by running away to marry at age 17. Caro's mother found her daughter headstrong, disobedient, and ungrateful, and tried with little success to eradicate her natural joyfulness, to mold her daughter into quiet, dutiful feminine gentility. Running away to marry a man whom her mother deemed unsuitable was as much a rebellion against that mother's rejection of her selfhood as it was an embrace of her love for Robert Townsend, Caro realizes towards novel's end.

But the need to hold onto that sense of identity, of that rebellion, has prevented Caro from becoming truly close to anyone, even her former husband. When considering re-marriage, Caro "feared a husband would wish her to mend her ways, make her settle down to respectability as Robert had never demanded" (118), a demand made over and over again by her mother. Fearing to return to that infantile state, Caro finds herself stuck in her adolescent rebellion, unable to acknowledge the very real faults that the brilliant but reckless Robert embodied, faults that prevented him from maturing into true intimacy with Caro. Only at novel's end, when she questions whether her "reflexive naughtiness" is  "really all she needed? She wasn't seventeen anymore" (344), does Caro realize that not all change is bad. Change that one chooses, rather than change insisted upon by another, change that allows one to expand rather than be diminished, is change well worth making.

Yes, feminism acknowledges that it is important to be wicked, to resist the stifling conventions of society and others. But realizing that there is more to life than "relish[ing] the little thrill of defiance that came with misbehavior" (289) may be just as feminist an insight, especially if one wishes to become an equal partner in a mature, intimate relationship. 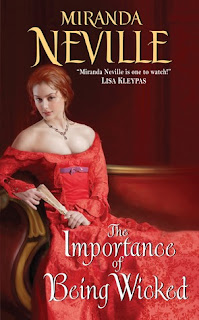 Miranda Neville,
The Importance of Being Wicked. Avon, 2012.


Next time on RNFF:
What publishers are the most receptive to feminist romances?