This past Saturday night, the Romance Writers of America handed out their annual RITA awards, honoring the best of the past year's romance fiction in categories from young adult to contemporary to suspense. But the most moving part of the evening for me was the presentation of the organization's Lifetime Achievement Award to historical romance writer Mary Jo Putney. I've read hundreds, perhaps even thousands, of romance novels over the course of my life, and so many of them linger in my head for only as long as I hold the book in which they appear in my hand. But Putney has the knack for writing not only stories, but characters, who remain vividly memorable, for crafting books that you want to read, and read, and read again. 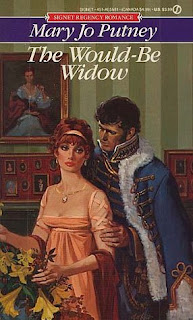 Putney came to prominence during a transitional period in romance writing, and in many ways helped blaze a new trail from the 1970s and 80s Old Skool romance, with its aggressive, often abusive heroes, spunky but sexually innocent heroines, and narratives told primarily from the heroine's point of view. After publishing several traditional Regencies in the late 1980s, Putney branched out into single-title series romance, novels that moved beyond the Old Skool formulas, crafting narratives that allowed readers inside the heads of both heroines and heroes. Many of her heroes were still in the aggressive rakish mold, but by showing us their past traumas and how they felt and responded to them, Putney gave us sympathy for their vulnerabilities and fears. She also gave her heroes character arcs, rather than settling on the simple "I love you" moment to make said heroes worthy of their heroines' admiration. These rakes and ne'er do wells had to change, had to mature, in order to be worthy of adult romantic love. Chase scenes, gunfights, and other mayhem still played a role in her plots, as in Old Skool romances, but what drew (and continues to draw) readers to her books are the psychological nuances of her compelling characters, characters that made us feel that finally, someone was writing romances about grown-ups, rather than virginal untried girls and whining babies masquerading as men.

Putney was also one of the first romance writers to discuss taboo subjects such as alcoholism, incest, spousal abuse, and rape. Earlier authors had used such traumas as devices to motivate plots, or as reasons for a hero to rescue a heroine or to punish a villain on her behalf. But Putney chose instead to explore the psychological impact trauma inflicts on human beings, male and female, and how relationships with friends and with lovers can help trauma's victims come to terms with their pasts and find the strength to believe in the possibility of better futures. 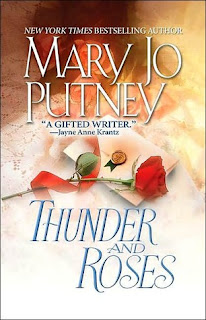 Most of my romance reading is done via books I check out from my local library. I only purchase romances that I've read at least once, and know I'll want to go back to, again and again. Unsurprisingly, my romance keeper shelves include many a Mary Jo Putney title: her "Silk" trilogy, her "Brides" trilogy, and several of the books in her "Fallen Angels" series. I waited a long time, hoping that Thunder and Roses, the first Fallen Angels book, would come back into print, as I was tired of borrowing it from the library. A year or two ago, I finally gave in and purchased a used copy, so much did I want that book on my "keeper" shelf.

As a special treat, I promised myself that after returning from the RWA conference in Atlanta, I'd cuddle up on my couch and reread my favorite Mary Jo Putney, Thunder and Roses, while raising a glass in her honor. What Putney book will you be rereading to celebrate? Let me know if you'd like a recommendation...