Where are all the female athletes?

After 77 years, the wait is over

Our Golden Boy: Andy Murray ends 77 years of waiting for a British champion

This past weekend, tennis fans around the world, in particular those in Britain, hailed with joy the straight-set win of Scot Andy Murray on the grass courts of Wimbledon. Newspaper headlines such as those above, from The Daily Telegraph, The Times, and The Daily Mail respectively, proclaimed Murray a new national hero, his accomplishment bringing to a glorious end a sporting drought second only to that of the hapless Chicago Cubs. But as The Guardian pointed out in its "PassNotes" column, "a humorous Q & A about a new issue of the day," the other newspapers had it wrong—unless, of course, women's athletic accomplishments simply don't count. Ignoring not only Virigina Wade, the most recent British woman to captured the golden plate in 1977, but also fellow Brits Ann Hayden-Jones (winner in 1969), Angela Mortimer (1961), and Dorothy Round Little (1937), the newspapers made clear that gender hierarchies are alive and well in the world of sports reporting. 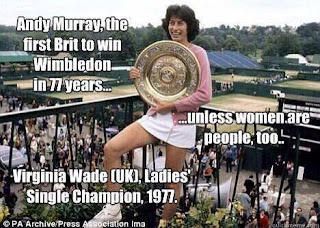 As they are in romancelandia. For if, as The Guardian claims, Wade and her fellow female winners have been "airbrushed out of history" by the press, few women athletes ever even make it on to the romance land canvas. For example, a Goodreads list of "Romance with Hero/Heroine are athletes" includes 118 titles, but fewer than 10 of these romances feature heroines in the athletic role.  Of those, one heroine is a ballerina, one a former competitive figure skater who now performs in ice shows, and several are former, but no longer competing, athletes. One featured a woman martial arts specialist in search of a man who can fulfill her submissive BDSM desires by beating her in a fight. Interestingly, the two books on the list that I read and enjoyed—Jennifer Iacopelli's Game. Set. Match. and Patricia McLinn's The Games—featured the intertwining stories of three pairs of both male and female athletes. Can a woman who devotes herself to sport only be attractive to a fellow athlete?

A 2008 study by the Women's Sports Foundation found that 69% of girls (as compared to 77% of boys) participate in organized or team sports, a major leap in the forty years since the passage of Title IX. I certainly see signs of this with my daughter and her friends— crew, fencing, swimming, horseback riding, and dance are only some of the many athletic activities in which they participate, and thrive. More recent studies show that sports participation can result in "lifelong improvements in educational, work, and health prospects" for women.

Why, then, are there so few athlete heroines in romance novels? And such a glut of athlete heroes? Are there other female athlete romances that you would recommend?

Email ThisBlogThis!Share to TwitterShare to FacebookShare to Pinterest
Labels: athletes