Thanks again to Willaful of "A Willful Woman" for tagging me in a 3 day quote challenge. I've been wanting to write this day 3 post for a while, now, and this challenge has pushed me to finally take it on.

Here are the rules of the challenge:
• Thank the blogger who nominated you.
• Publish a quote on 3 consecutive days on your blog. The quote can be one of your own, from a book, movie, or from anyone who inspires you.
• Nominate 3 more bloggers each day to carry on this endeavor.


Today, I'm sharing multiple quotes here, all taken from romance novels. During the past year and a half, I've been jotting down lines from romances I've read, lines which include the words "feminist" or "feminism." I've been interested (depressed) to see that even in the more liberally-inclined books, these words are often presented negatively, as something the protagonist has to struggle against, or as something the protagonist is uneasy/ashamed to identify with. Or, strangely enough, to make a male character appear more (or less) sympathetic. Or, less often, to introduce a note of humor.


Here is where I'm supposed to list 3 bloggers to take on the quote challenge. Instead, though, I'd like to challenge all romance writers, not to set down their own favorite quotes, but instead, to use the word "feminist" or "feminism" in a positive way in their current WIP. 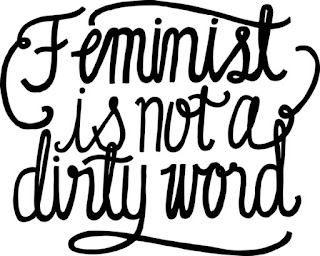 Sarah Mayberry, Her Kind of Trouble

The heroine is talking to the hero about her former long-term boyfriend, who wanted her to give up her career after they married and had kids. She broke up with him over it, an action with which the hero sympathizes:

"You love what you do. What in their right mind would try to take that away from you?.... I suppose he gave you a vacuum cleaner for your birthday, too," Seth said, shaking his head. "Don't quote me on this, but sometimes I can fully sympathize with the feminist movement" (Kindle Loc 2229)

The hero's sister is talking with the heroine:

"I know I hold on too tight to him, I do. It's hard not to, when he's the one reliable handhold I got, you know? Or maybe you don't know."
I shook my head. "I don't know. But I can hear what you're saying."
"I'm GLAD you don't know," she said, meeting my eyes for just a second. "I want my brother to be with someone who wants him, but doesn't NEED him. You know? Listen to me, sounding like a goddamn feminist. But yeah... someone who's not so dependent on him that they can't step back and see all the good in him, I guess." (Kindle Loc 4009)

Molly O'Keefe, His Wife for One Night
A conversation between the heroine, Mia, and her sister, Lucy. Mia has been in a marriage of convenience for the past five years, with a man whom she loves but who doesn't love her:

"You deserve better."
"Like what Mom and Dad had?"
Lucy stopped and turned to face her. "What's wrong with being on your own?" Lucy asked. "There's strength in that."
"And loneliness."
"You think Mom wasn't lonely?" Lucy asked. "Dad worked long hours and Mom had nothing to do but wait for him. Raise his children and keep his meals warm."
"This isn't going to turn into some feminist diatribe, is it?"
"No. Well, maybe. I'm just saying, marriage can be lonely, too."
"You don't have to tell me," Mia snapped.

Although "we" bought it, use of the word we (ital) here is stretching it considerably. There was no way I could have afforded a house like this, run down or not. It was in a prime area with killer views and a huge footprint in an established neighborhood. I wasn't comfortable with Simon paying for everything, no matter how much money he had stashed away. So I'd insisted that thae house would be in his name only, and I'd contribute to monthly household expenses. He gave me an enormous budget to work with for the design, and while I still felt a bit guilty when I saw the invoices, I had to admit I liked having a rich boyfriend.
There. I said it. Revoke my feminist card. Take away my--well, whatever you take away when a woman admits she likes nice things. I was getting the house of my dreams, with the man of my dreams. (232)

Not that she wanted an alpha all the time. But she couldn't deny she'd enjoyed Ben's attempt to play that part, even for a few seconds. Dangerously tempting, especially when she knew what he'd do if he found out just how far she'd once wanted him to take that role in the bedroom. Still wanted, frankly.
But no, she'd shown the guy a simple amusing scene [in a graphic novel] about an over-the-knee paddling and he'd lectured about feminism for ten minutes solid. Lindsey had no desire to repeat that experience, either the lecture itself or the burning humiliation at Ben's response to her questionable choice in reading material. She hadn't even gotten to the part where she wanted him to do that stuff to her. Overwhelmed by his political correctness, she'd put the comic aside and never raised the subject again. (Loc 388)

And another from the same book, from the hero's POV this time:

"Yeah. She showed me that [the spanking scene in the graphic novel]. And I kind of blew it off. And told her I'd never do that, because of feminism and exploiting women, and blah blah blah. Stuff I thought she'd want to hear." (Loc 551)

Delphine Dryden, The Principle of Desire

"So my mom is a Southern Baptist. Deep-down, dyed-in-the-wool, revival-tent church lady. Doesn't drink, doesn't smoke, thinks feminism is a dirty word. Watches Billy Graham and votes ultraconservative. All the stereotypes, right? Except she's my mom, and I love her, and in a lot of ways she's an awesome parent.... I realized a long tim ago that my mother's beliefs weren't my beliefs weren't my beliefs, and that used to be a huge problem for me, especially when I was a kid. That's part of my baggage now, she's part of my baggage, in a way I don't think everybody's parents are. Way more than my dad's ever been. Because I had to get past the idea that only one of us could be right, and that I had to hate her if she was wrong or hate myself if she was right." (Loc 1176)

Jill Shalvis, Then Came You

She heard some rustling and knew he was getting out of bed. Normally she'd wonder if he was naked, and maybe even indulge in picturing it, but right now she just wanted him to hold her, as much as that set feminism back fifty years. (257)

And what exactly was his deal with ordering her around when they were fucking? And what was her deal with not minding? And she didn't mind. Dammit, she was a feminist! Marched on Washington to protect a woman's right to choose, etc., etc. But damn if she didn't love to hear him growl out orders. Although it was never orders for orders' sake. He always made sure she got off. Always made sure he left her satisfied and smiling. The man was a fucking demon in bed. (Kindle Loc 2298)

The (male) narrator describing his wife:


Blair is also a lecturer in Women's Studies. I'm sure that the first time any number of new Barnard students knock on her door they're expecting a West Side feminist from a time capsule: frizzy-haired, cosmetics-challenged, badly dressed and proud of it. But Blair is more like Gloria Steinem than Betty Friedan. Her hair is professionally streaked, she gets treatments for her skin, and she dresses for her office as if she were going to a C-suite. "Role model" applies here. (Kindle Loc 55)

The narrator describing a male friend:

Jared doesn't work. He doesn't have to. In his twenties, he invented a kids' dessert called Frozen Fruit Guts—the flavors were Rotten Raspberry, Mushy Melon, and Grisly Grape—that he sold to one of the biggest food companies for a fortune. He went on to write short, funny books (Feminism in Sicily and Last Chiropractor Before Freeway) before hitting some kind of personal wall. (1126)

I know what my students and the other faculty say about me and probably most of the strangers I see walking down the street. They think I'm foolish and old-fashioned and anti-feminist. I'm not. I understand that sometimes my secular and my religious beliefs come into conflict. I have no excuses to offer. It may seem hypocritical, and yet this is what feels right for me.
but I think if they could hear Elan's voice at this moment, his hoarse words, they might understand. Covering my hair isn't about being oppressed. It's about honoring my faith, but also about giving a gift and in so giving, bringing a man easily twice my weight and a good foot taller than I am to his knees. Having him so consumed with thoughts of me that I occupy his dreams. (Kindle Loc 369)

It was only a couple of weeks ago that he filleted Thomas Brubaker's essay 'Why Feminism is Dumb' for the edification of the entire class. He read out excerpts and licked his finger with a flourish before turning pages, teeth almost snapping around the most deliriously poisonous comments.
I even remember one of them now: "It seems Mr Brubaker labours under the misapprehension that women are put on this earth to wipe his arse for him. Would that he had done so himself with this essay, and spared us all the horror of having to hear a single ghastly word of it." (Kindle Loc 75)

TJ Clune, How to be a Normal Person

The protagonist, Gus, the owner of a video store, is watching his three older woman friends (who may or may not be lesbians) pick out their next movie:

Bertha sighed from the shelf where the Cs began. "Cannibal Women in the Avocado Jungle of Death. Seriously, Gus?"
"It's a movie with a very strong feminist moralistic backbone," Gus said seriously. "And also, it has a battle between the Barracuda Women and the Piranha Women. Both are cannibal tribes. In the Avocado Jungle. Fun fact, it's based upon Heart of Darkness." (Kindle Loc 238)

Photo credits:
Feminist is not a dirty word: The Electric Typewriter