Pot of Gold at the Beginning of the Rainbow? Rebecca Rogers Maher's ROLLING IN THE DEEP

A romance novel, much like a fairy tale, typically ends with a reward: a new job, perhaps; a stronger relationship with friends and family, quite often; and, of course, a committed romantic partner. The reward, otherwise known as HEA, or happily ever after, is such an integral part of the genre that it is one of the two elements in RWA's definition of romance.

What happens, though, when the reward comes at the start, rather than the end, of the romance? What comes after the reward? After what many would consider a "Happily Ever After"?

In the case of Rebecca Rogers Maher's latest contemporary, Rolling in the Deep, the reward in question is one millions and millions of Americans attempt to win every week: the lottery. More specifically, in the case of Holly Ward and Ray Lopez, co-workers at a Cogmans store (think Wal-Mart or whatever big box chain department store owns the working class market in your area), the four hundred and twenty-five million dollar jackpot in the New York state's latest Powerball lottery. Holly doesn't ever invest her hard-earned Cogmans pay buying the most infinitesimal chance at a wildly improbably dream: "Yeah. Let's definitely play the lottery. Because that's not rigged at all. We'll totally win" (Kindle Loc 120). But new coworker Ray, whom she'd find sexy and appealing if only she weren't as tired "as a hamster in a wheel" from working a demoralizing, dead-end job in order to care for her son, attempts to cheer her up when he catches her in a down moment by proposing they go in together on ticket, and Holly ends up handing over a dollar. A dollar really isn't too much to spend "for the sake of a little dreaming," is it?

Dream turns into reality, though, when number after number read out by the eager young woman in a red pantsuit on the television screen matches the the numbers on the ticket Ray purchased. Suddenly, less than a quarter of the way through their story, Ray and Holly find themselves in the middle of something that's supposed to be a fairy tale.

But for Ray and Holly, winning the jackpot often feels more like a nightmare. Because neither Holly nor Ray can set aside the existential question that comes not only to those who experience tragedy, but also to those who are the beneficiaries of a completely unmerited windfall: "Why me?"

Up until now, Holly's life has been a battle. She'd been a good student, but growing up white and poor in Poughkeepsie, Holly's schooling hadn't been strong enough to get her in anywhere but the local community college. She'd attended there for two years, waitressing to pay her way through, and planned to transfer to a more competitive, higher-ranking college, one whose diploma would allow her access to a decent-paying job. But then her mother, who worked cleaning bathrooms at Vassar, died from a heart attack, and a handsome but manipulative man conned his way into her life. Only after several years of suffering his criticisms and verbal abuse did Holly find the courage to divorce him, gaining partial custody of her son, a pittance of a child support payment, and a job at Cogmans. "What kind of loser works at Cogmans? What kind of mother would let her child see her like that?" her still abusive ex taunts whenever she drops her son off at his fancy new house (he's remarried, a wealthy woman this time around). Often, Holly can't help but wonder herself.

Mexican-Italian Ray had a far stronger family life, growing up surrounded by the Queens community that frequented the diner where his mother waitressed. Ray dreamed of working in a diner of his own, but his mother, who could have returned to Mexico after her husband died, remained in New York, determined that her two boys would have a better life than she had. Before her recent death, she made Ray promise to pursue something better for himself: to attend the Culinary Institute and earn a job in "quality" restaurant. But cooking in a diner hasn't given him the experience he needs to even apply to the elite school. Moving closer to the Institute, he's working one job at a restaurant, gaining the requisite experience at a "real" restaurant, and working a second job at Cogmans to make ends meet. But "up here in the country," Ray feels isolated, unmoored. Holly is the only one who offered a friendly "hello," who asked him if he needed help, who captures his attention with her sadness, and her dignity, and her calm. No wonder he's been nursing a giant crush on her for weeks. And that he's thrilled that she agreed to go in with him on the lottery ticket.

But now that they've actually hit the jackpot, neither Holly nor Ray is really feeling like the hero of the fairy tale everyone tells them they're in. The attention, the decisions, the invasion of privacy, and above all, winner's (rather than survivor's) guilt, all weigh them down. As Holly tells her friend Beth:

And as Ray thinks as he's walking into a party for himself and Holly given by his ex-Cogmans co-workers:

I can leave.
But the woman with the cart next to me can't. She can't afford to shop anywhere else. All my coworkers, waiting for me in the break room with a cake to celebrate my lottery win—they can't leave. They need this job, just like I did a few days ago.
I don't know what I'm supposed to do with that. (968)

In their desperation to flee, if only for a a few stolen moments, from the overwhelming changes about to crash atop them like a tsunami, Ray and Holly make their escape—via sex. With one another. And soon the newspaper headlines aren't only about striking it rich: "Local Powerball Winners Hit It Big in More Ways Than One" (1911). Will Ray and Holly's romance wither under the pressure, before it even has a chance to bloom? 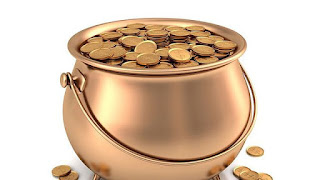 Maher's story isn't interested in allowing readers to vicariously live out their dreams of untold riches by watching empty placeholder characters spend and spree on their behalves. But nor is it a cautionary tale, warning readers not to wish for the sun for they'll only get burned. Instead, it is a thoughtful attempt to understand what it means to be happy, and to what extent wealth can contribute to the pursuit of same. For make no mistake, having money means having power, and being poor often equates to being powerless, as Maher's class-conscious romance makes all-too-painfully clear.

But it also suggests that other things—love for family; respect for self; a desire for community; the need to give back—can remain constants, even in the face of tragedy.

And even in the face of the proverbial pot of gold.


ARC provided by NetGalley in exchange for an honest review. 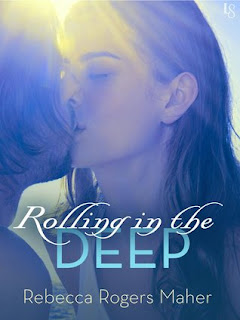 Rebecca Rogers Maher
Rolling in the Deep
Loveswept, 2015
Posted by Jackie C. Horne at 9:00 AM