A WRINKLE IN TIME goes graphic

We all have them, our personal "comfort books," the books we return to again and again whenever we need the reassurance of the familiar, a story to offer solace in the face of setback or failure. As a newly minted teenager, I had two such books: Elizabeth George Speare's The Witch of Blackbird Pond (1958) and Madeleine L'Engle's A Wrinkle in Time (1962). One a work of historical fiction, the other of science fantasy, yet each reminded me that being different from everyone else might be difficult, but worth it, and that a smart, strong girl need not pretend to be less than she was just in order to fit in, or be liked by a worthy boy.

Returning to A Wrinkle in Time as an adult, as I had cause to do many times in the course of teaching a class on children's and YA fantasy and science fiction for nearly a decade, was both a pleasure and a disappointment. I took great pleasure in recognizing an old familiar friend, in seeing once again L'Engle's clear attempts to point out the limitations of gender roles, and, of course, in allowing myself to share Meg and Charles Wallace's triumph of good over evil. My disappointments came from recognizing the book's limitations, limitations that as a child I did not have the knowledge or skills to see. For example, what looked to me at 12 to be a classic case of good vs. evil strikes me today as a rather heavy-handed, Cold-War-influenced construction of evil (Soviet-style conformity = bad). And as an adult, I'm left wondering how rescuing Mr. Murry has made a major strike against the Dark Thing plaguing the universe.

The most biting disappointment, though, stemmed from limitations of the feminism upon which the story was built. Yes, L'Engle broke with gender stereotypes by making Meg the one who is good at math and science, while Calvin O'Keefe, her nascent love interest, is the "communicator," someone far better at literature and history. She also made not only Meg's father, but also Meg's mother, a scientist. And she chose to make the magical helpers who aid Meg and Charles Wallace's quest women/witches, refusing to embrace the negative construction of the witch as the feminine face of evil. But even while she broke with many gender stereotypes, she also reinforced others (more on them below). 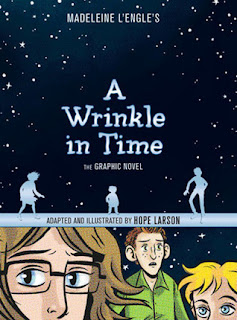 Last fall, on the 50th anniversary of the book's original publication, FSG issued a graphic novel version of L'Engle's classic text. Knowing of my love for the book, my spouse gifted me with a copy these past holidays. As I turned through its pages, I wondered if adapter and illustrator Hope Larson would attempt to mitigate any of the limiting messages about femininity lurking in the text's implicit messages.

Interestingly, since Larson hews so closely to L'Engle's original text, using her dialogue almost word for word, any reinterpretation comes largely due to the play of words against pictures, not to any changing of L'Engle's words themselves. Two threads that popped out at me in reading Larson's pictures against L'Engle's words were first, the discussions of female beauty, particularly Mrs. Murry's; and second, the many instances of hand-holding in the novel between Meg and others.

As a teen, I appreciated the message that a girl could be both smart and beautiful, or, at least in Meg's case, had the potential to grow up to be pretty. But as an adult, I found the insistence that Mrs. Murry was beautiful, not just smart, rather annoying.  Meg is the first one to broach the topic of beauty, while talking with her mother about her difficulties at school: 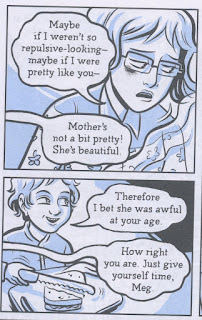 With only L'Engle's narrative, readers are given no real sense of what Mrs. Murry looks like. But Larson's drawings give us Mrs. Murry in the flesh. And while Mrs. Murry is a bit more put together than is scruffy Meg, she's no overwhelming vision of gorgeousness. The dialogue balloons here emphasize that it is Charles Wallace's opinion that his mother is beautiful, one that his mother doesn't necessarily share. Meg, in her adolescent malaise, may think beauty is important, but the text does not necessarily share her opinion. 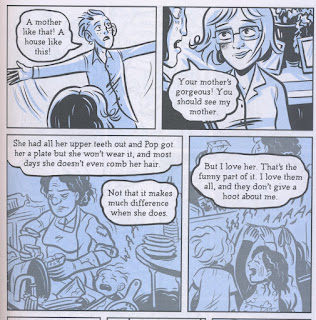 In fact, it is the boys in the novel who insist upon Mrs. Murry's beauty, a fact that the graphic novel format emphasizes. Not only does Charles Wallace think his mother beautiful, but so does Calvin, who laughs when Mrs. Murray tells Meg "You just haven't had any basis for comparison, Meg. I'm really quite ordinary," and denigrates his own mother in comparison:


I used to feel sorry for Calvin for having a family that "didn't give a hoot about me," but now the class dimension of his rejection, as well as the beauty-bias inherent within it, give me pause. I also find it annoying that he reassures Meg that no one would believe her father left her mother for another woman "after one look at your mother." Beauty, not intellectual interests or shared passions, are what keep men glued to women's sides, Calvin's attempts to comfort Meg suggest. Seeing Mr. Murray's photograph, Calvin deems him "not handsome or anything," suggesting that unlike for men, beauty is not that important. Calvin's praise of Meg's "dreamboat eyes" continues to be a touching moment, the first time a bloom of attraction is recognized and returned. Yet recognizing Calvin's investment in the cultural necessity of women's beauty makes it less touching that it once was for me. 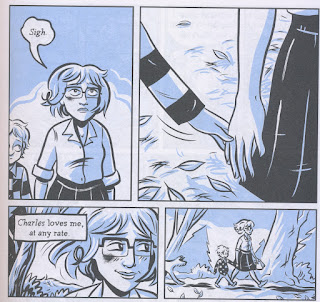 Larson is able to make more of an intervention in her depiction of scenes of hand-holding. For Meg, holding hands is a sign of relationship, a sign of love, as in the early illustration of Meg and Charles Wallace above, from early in the story. But in the novel, reaching out for someone's hand can also be seen as a sign of Meg's weakness, or perhaps instead of Calvin's active, masculine strength: "Calvin reached out and took Meg's hand with a gesture as simple and friendly as Charles Wallace's"; "Meg stumbled as the land sloped suddenly downhill, but Calvin's strong hand steadied her" (50). In the graphic novel, however, such narrative tags disappear, replaced with pictures which give no sense of who took whose hand first, and no indication of any stumbling on Meg's part. Though Calvin appears in the lead in one pane, the two others show Meg and Calvin side by side: 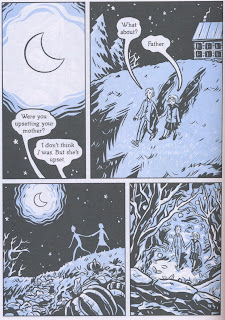 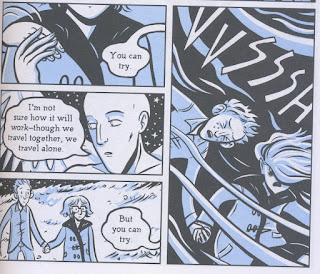 Later, before they "wrinkle time," Meg asks the witches if they can hold hands while doing so. The novel notes "Calvin took her hand and held it tightly in his" (76), but the picture suggests a mutual holding-on: 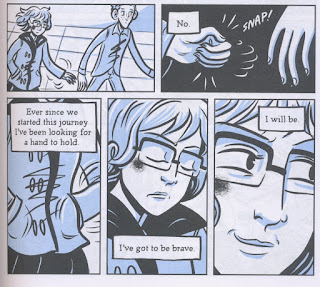 During their first visit to the dark planet Camazotz, Meg realizes that "She wanted to reach out and grab Calvin's hand, but it seemed that ever since they had begun their journeyings she had been looking for for a hand to hold, so she stuffed her fists into her pockets and walked along behind the two boys. —I've got to be brave, she said to herself. —I will be." (125-26). I come away from reading this passage feeling Meg's determination, but also her fear. Larson's image, however, with Meg smiling in the last panel, leaves me with a far more positive feeling about Meg's rejection of hand-holding, suggesting that this is a step forward for Meg, a sign of her growing maturity. 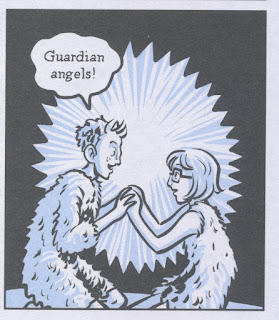 The next time we see Meg and Calvin holding hands, it is not out of fear or the need to protect or be protected; it is a sign of their mutual discovery of a way to communicate with the beast creatures who have no sense of sight (a discovery which in the novel Calvin makes alone, sitting on the opposite side of the table from Meg):

At novel's end, hand-holding becomes a sign of goodness, of the spirituality of the three witches, and above all, of the power of love: "Then there was a whirring, and Mrs. Whatsit, Mrs. Who, and Mrs. which were standing in front of them, and the joy and love were so tangible that Meg felt that if she only knew where to reach she could touch it with her bare hands" (190). Though Larson does not reprint Meg's interior thoughts, she does conclude with a final picture which makes that metaphorical hand-holding literal, and doubled: the mature romantic love between the newly reunited Mrs. and Mr. Murry, and the tentative, blossoming affection between two adolescents learning to value their own, and each other's, true worth. 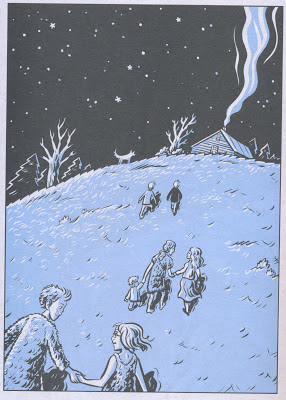 Madeleine L'Engle, A Wrinkle in Time: The Graphic Novel. Adapted and Illustrated by Hope Larson. FSG 2012.

Next time on RNFF:
Feminism in the Romance Classroom