Critiquing the portrayal of disability in romance

While researching the portrayal of disability in romance fiction for my last post, I came across Emily M. Baldys's intriguing 2012 article, "Disabled Sexuality, Incorporated: The Compulsions of Popular Romance."* Noting that people with disabilities have often "struggled to be recognized as sexual beings" (125), Baldys finds the prevalence of disabled heroes and heroines in romance fiction worthy of study. In particular, she wonders if, or how, such novels "revise or channel oppressive attitudes" towards the disabled and their sexuality.

To answer her question, she analyzes five romances that feature cognitively disabled protagonists: Colleen McCullough's Tim (1979); Billie Green's A Special Man (1986); Peggy Webb's A Prince for Jenny (1993); Pamela Morsi's Simple Jess (1996); and Jennifer Ashley's The Madness of Lord Ian Mackenzie (2009). Ultimately, she suggests that such novels are not as progressive as they first appear; though they grant their cognitively disabled protagonists sexual subjectivity and agency, they "strictly limit the kinds of (heterosexual, marriage-oriented) romantic options available to disabled characters" and "showcase ableist commonalities" in order to "downplay, reinscribe, and rehabilitate disability" (130).

I've not read the first four books that Baldys discusses, but I have read the the most recent title, the Victorian historical romance The Madness of Lord Ian Mackenzie. And my memories of it did not at all square with Baldys's critique. So I decided to reread the book, to see which I found more credible, Baldys' argument or my own recollections. Readers who haven't yet read Ashley's book (and I'd recommend it, highly) might want to stop here, as spoilers abound below.

Baldys raises four major objections to the portrayal of the disabled. The first three focus on the way "romances featuring characters with impaired minds compensate by assigning an increased aesthetic, erotic, and metaphoric significance to physical bodies" (130). These arguments lose much of their persuasiveness, however, when one considers the fact that they can be applied not only to books with disabled characters, but to the majority of romance novels published before 1990. If writers are following genre conventions, rather than conventions specific to romances with disabled characters, then it seems redundant to critique these specific novels rather than the genre as a whole.

Even if this were not the case, the first three objections Baldys raises do not apply to Ashley's Lord Ian. Significantly, Baldys only quotes from Lord Ian once, and in an unconvincing manner, to support these claims, although her evidence from the other books is persuasive. These differences suggest that the portrayal of disability in romance may have changed in important ways over the thirty-year span the works she analyzes cover.

Baldys's first claim is romance authors are able to make disabled heroes and heroines viable objects of sexual desire by focusing first on their bodies, rather than their minds, bodies which appear whole and normal. "The novels' narrators, as though offering preemptive compensation, emphasize the disabled characters' physical charms before their disabilities are revealed, so that, in most of the novels both readers' and characters' first impressions are of physical wholeness and attractiveness" (130). This is certainly not the case in Lord Ian. The book's title openly proclaims the hero's "madness," while its opening chapter includes no physical description. Told through Ian's point of view, the scene reveals not only his unusual behavior, but the different way he thinks about and responds to the world around him. Contemporary readers generally read his behavior as stemming from Asperger's Syndrome, but in 1881 England, the condition would have more likely been thought a form of lunacy. Ian's cognitive differences, rather than his physical "wholeness," is what is emphasized here.

Baldys also points to the "blatantly hyperbolic language" typically used to describe disabled bodies in these novels (130).  Well, yes, romance heroes in general are often presented in such language; Beth, Ian's heroine, thinks he "had the body of a god" (Ashley 150). But for Beth, Ian's attractiveness lies not only in a "normal" attractive body. During their first meeting, although "her entire world stopped" at the sight of him, Beth finds herself intrigued not only by Ian's looks, but also by his behavior: his restlessness; the way his eyes can't quite meet hers, or anyone else's; his abrupt announcement that he wants to bed her, and will marry her in order to do so. Older romances may have relied on the normalizing power of an attractive body to undercut readers' potential negative reaction to a cognitively-disabled protagonist, but Ashley's novel does not.

Lord Ian also does not follow the pattern of Baldys's second objection: the way "sexual desire and activity are used to interpellate the disabled characters as 'men' and 'women'" (131). Ian does not become a "man" when he consummates his desire for Beth; Ian is already sexually experienced before he ever meets Beth. And their sexual joining is not portrayed as "natural, organic, or instinctual, arising from the essential 'rightness' of heterosexual relations," as Baldys' argues occurs in the other novels.

Baldys cites from Lord Ian to provide evidence for her third objection, the way these novels deploy metaphors of able-bodied lovers incorporating the disabled into themselves. Such metaphors are not just an allegorizing of of sex, she suggests, but also work to contain the threat disability poses to compulsory heterosexuality; "incorporation works to discipline and restrain disability by representing its threat as safely contained within normality" (133). The quote she cites from Ashley's novel seems to support this interpretation:" [Ian] hungrily took her mouth, wanting to pull her inside him, or himself inside her. If he could be part of her, everything would be all right. He would be well. The horror he kept secret would go away" (Ashley 214).

Yet Baldys does not provide the context for this quote, a context which undermines her interpretation. Ian's hope that by being "pulled inside" he'd be "well" is not a wish for his cognitive differences to disappear. It is a wish that the "horror" he has kept secret for five years (that he believes his brother committed a murder) would disappear. His desire to be "well" is a desire to escape the pain of the nightmares that his remembrance of that secret bring on.

Even if Ian had been wishing to rid himself of his cognitive disabilities, though, the text that immediately follows this inner monologue suggests that it is a misguided one, and that Ian knows it is misguided: "Except he knew it wouldn't" (Ashley 214). Ian knows that striving to achieve normality through sex with his able-bodied wife cannot accomplish the impossible: it cannot change the events of the past, nor the present reality of his mental state.

Older texts typically cure or kill off disabled characters, in order to remove their threat of deviance. But this "narrative impulse to reduce and erase disability" does not work in the genre of romance, where happy endings are de rigueur. Instead, Baldys suggests, romance novels with disabled protagonists "radically reconstruct disability in order to conform to a particular kind of fantasy, one that imagines a compliant model of disability amenable to both reinscription and rehabilitation" (134). In particular, they suggest that "the effects of the disability are mitigated or overcome by the effects of blossoming love" (134). Her prime example of such "recuperation" is Ian Mackenzie.

Ian's recuperation plays out, Baldys argues, "through the explicit attribution of moments of 'improvement' in Ian to the influence of Beth and/or their relationship. Beth's love serves to cure Ian's headaches, calm his fear of crowds, and lessen his bouts of rage" (135). A closer look at the novel suggests that this is not in fact the case. One of Ian's bouts of rage stems is the direct result of another man's apparent threats to Beth, a rage that Beth is unable to contain. Another, the one mentioned above, is a result of his fears of his brother's guilt being revealed, or being directed in violence against Beth.  Beth is not able to mitigate or contain these rages. 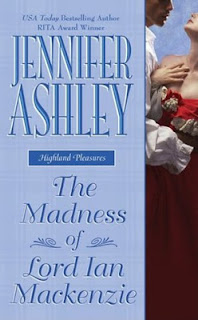 When Ian shares his fear with Beth that some day he will harm her in one of his rages, just as his father harmed his mother, Beth points out to Ian that his rages all stem from his desire to protect, not to harm. When he still insists "I have the rage inside me," she retorts, "Which you know how to control" (311). His ability to control his rage when it might unfairly harm another is not something that results from his love of Beth, but something he already had. She just allows him to see it for himself.

Baldys would have it that Ian, who could not look directly into Beth's, or anyone else's, eyes at novel's start, can once he acknowledges his love for her. But the text explicitly denies this:

Ian cupped her chin and turned her face up to his. Then he did what he'd been practicing since the night on the train—he looked her fully in the eyes.
He couldn't always do it. Sometimes his gaze simply refused to obey, and he'd turn away with a growl. But more and more he'd been able to focus directly on her. (Ashely 318)

Looking Beth in the eye is not something that magically happens because he now loves her; it is something that Ian struggles to accomplish, and not always successfully, in order to demonstrate to Beth his love.

A passage from Lord Ian that Baldys doesn't quote, but that speaks to the desire to "recuperate" disability, occurs toward the end of the novel:

"All of us are mad in some way," Ian said. "I have a memory that won't let go of details. Hart is obsessed with politics and money. Cameron is a genius with horses, and Mac paints like a god. You find out details on your cases that others miss. You are obsessed with justice and getting everything you think is coming to you. We all have our madness. Mine is just the most obvious." (Ashley 306)

Is Ian's statement an attempt to normalize disability? Or to disable normality? My view is that it does the latter, to quite positive effect.


Are there any readers out there familiar with any of the other novels Baldys discusses? Do they conform to the patterns she suggests? What about novels with physically, rather than cognitively, disabled protagonists? Are 21st century romances freer from the problems Baldys identifies than 20th century ones?

Next time on RNFF:
Miranda Neville's The Importance of
Being Wicked
Posted by Jackie C. Horne at 9:00 AM